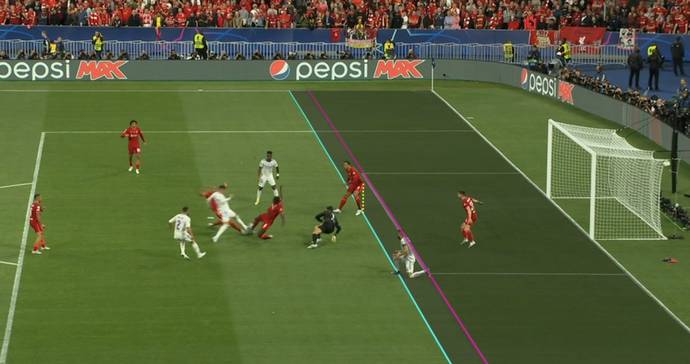 Karim Benzema briefly thought he had continued his stunning run in front of goal for Real Madrid in the Champions League before VAR brought his opening strike back for offside.

VAR stepped in but after a delay of three minutes and 22 seconds, the officials decided the stand by the offside call. In the 43rd minute, Benzema slotted the ball into the net after a defensive scramble in the Liverpool box but the Frenchman’s celebrations were cut short when the assistant raised his flag.

The Frenchman converted one of the few chances to fall to the Merengue in a first half in which Liverpool held the upper hand.

On BT Sport’s coverage of the match, Rio Ferdinand said: “The ball comes off a Liverpool player and it’s deemed offside?”

“If I’m a Real Madrid player, I’m going bananas in that changing room!”

Benzema broke in behind the Liverpool defence brilliantly to get onto the end of David Alaba’s superb long-range pass, before striking what he thought was his 16th Champions League goal of the season.

Why was Benzema’s goal disallowed?

The video assistant referees did not overturn the decision as Fabinho’s touch was not a clear deliberate pass, which meant Benzema was still regarded to be offside.

Originally, Benzema was judged to be in an offside position as he was behind goalkeeper Alisson with only Andy Robertson between him and the goal. But the ball appeared to come off Ibrahima Konate and then Fabinho to fall into Benzema’s path.

However, Fabinho did not intentionally play the ball backwards and therefore the officials had to rule out the goal.

Benzema latched onto a ball over the top during the first-half of Real Madrid’s Champions League final against Liverpool. He dribbled around Alisson, who got a touch to the ball, before it hit Ibrahima Konate and then the goalkeeper again.

It was unclear whether the ball had been passed by Valverde, with video replays suggesting the ball had come off Fabinho, but the decision stood and Benzema was denied an opening goal.

Liverpool conceded early in the second-half to make it 1-0, with that sole goal from Benzema enough for Los Blancos to be crowned European Champions for a record 14th time.