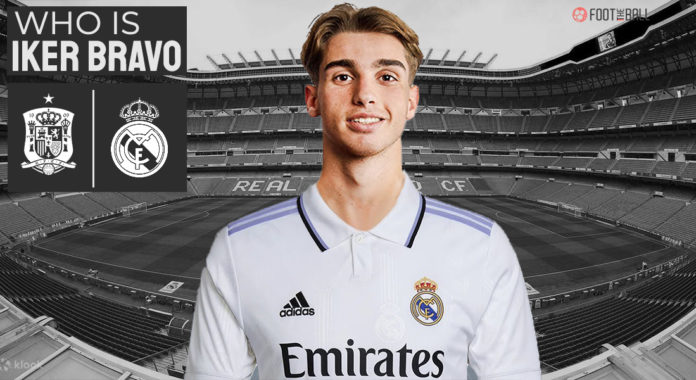 Real Madrid fans have long demanded a backup striker for Karim Benzema, someone who could offer a decent output in his absence and check the boxes that Luka Jovic and Mariano Diaz have failed to. And it looks that the club has finally addressed the matter and pursued a signing up front.

The 2021/22 La Liga and European champions have completed the signing of Bayer Leverkusen striker Iker Bravo. He will arrive on loan with a purchase option of close to €6 million. The 17-year-old captivated Real Madrid enough to bring him to the Santiago Bernabeu. Interestingly, he was part of La Masia before.

Bravo, capped by Spain at various age levels through to Under-19, made two substitute appearances for Leverkusen in all competitions last season. Carlo Ancelotti’s side are said to have seen off competition from Atletico Madrid. Bravo is expected to spend the 2022-23 season playing for Los Blancos‘ reserve side Real Madrid Castilla.

Exactly who is Bravo though and what does he bring to the table that impressed Real Madrid so much?

Who is Iker Bravo?

The Spaniard began his career at Barcelona’s La Masia at the age of five, but he recently moved to Bayer Leverkusen in July 2021. The teenage Spanish prodigy was handed his first-team debut by Gerardo Seoane in October last year in a DFB-Pokal clash against Karlsruher SC. Following that, Bravo featured in a Bundesliga game against Hertha BSC in November 2021 but has not played a single game for the first team since.

Spanish football identity: Dominate with the ball and keep possession

Since joining Bayer Leverkusen in 2021, he has scored 10 goals and provided 3 assists in 17 appearances for the U17 and U19 teams.

In terms of top-flight appearances, the forward played his last game on the 11th matchday of the 2021/22 Bundesliga season. Playing for Bayer 04 Leverkusen, he played against Hertha BSC and was substituted in and played as a forward for 11 minutes in that game. In terms of total touches, Iker Bravo had two individual ball possessions. Furthermore, he had two tackle challenges in that match. Of these, he was able to win one.

What does Mes Que Un Club mean? The history behind it all for Barcelona

His coaches from both the youth and senior teams have been effusive in their praise of the Spaniard, and deservedly so. His resume is incredibly impressive for a 17-year-old. Bravo, despite his young age, already has shown his versatility, as he can play as a centre-forward, attacking midfielder, and second striker.

His finishing skills, off-the-ball mobility, and ability to drop deep, make him one of the best players in every youth team he plays for and yield results almost instantly. His physicality allows him to engage in duels and protect the ball, an attribute he may have honed further in the physically demanding game played in Germany.

Iker is a highly unpredictable player with the ball at his feet, having scored a range of impressive goals. At both La Masia and Bayer Leverkusen, he was well-known for his ability to link up with midfielders and wingers.

Bravo won’t be offered a position in the first-team right away because Real Madrid would want to give him time to develop further under the watchful eye of Raul at Castilla. And the former club captain knows a thing or two about putting the ball in the back of the net.

Bravo’s goalscoring capabilities at such a young age caught the eye of Real Madrid, who had been pushing hard to sign the 17-year-old for a while now, along with rivals Atletico Madrid. As mentioned earlier, the 17-year-old will likely be a part of Raul Gonzalez’s Real Madrid Castilla outfit, who are in need of attacking reinforcements after seeing the likes of Andri Gudjohnsen and Jaume Jardi leave the club.

The Spanish forward’s signing will add further firepower to the team as they aim to earn promotion to La Liga 2. Furthermore, given the dearth of backup options for Karim Benzema in the senior team, Bravo could soon find himself playing under Carlo Ancelotti if he continues to develop at the current rate.