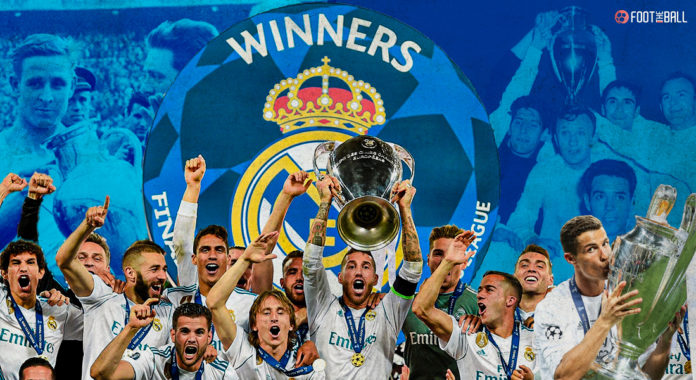 Real Madrid and the Champions League have a special connection dating back decades. Los Blancos have won the competition a record 14 times. Their most recent triumph came over their old rivals, Liverpool, the same team they beat in 2018. There is no doubt that Real Madrid become a different proposition in the Champions League.

Opponents cannot count them out until the final whistle, as evidenced by their rollercoaster run this campaign. They won the competition five consecutive times in the late-1950s. That established them as the kings of the continent, and they have continued their dominance ever since. In the lead-up to the final in Paris, FootTheBall recounts the glory seasons over the years.

First things first, the whole concept of the Champions League owes a lot to Santiago Bernabeu, the former president of Real Madrid. It was Bernabeu, Bedrigan, and Hungarian footballer-turned-coach Gusztav Sebes who created the format of the then European Cup.

Bernabeu himself was the manager of Real Madrid back then, going on to win from 1956-to 1960. The five triumphs came over Reims, Fiorentina, Milan, Rennes, and Frankfurt respectively.

Madrid won 7-3 against Frankfurt in 1960, the highest-scoring final in history. Real Madrid were the dominant side of the day, having players like Alfredo Di Stefano, Ferenc Puskas, Enrique Mateos, and others.

They were presented with the original trophy as a souvenir after this win. Though their monopoly would be broken in 1961 with Benfica winning the competition, Los Blancos would be back soon.

It would take Madrid only six years to get back to the final game of the European Cup. Led by Paco Gento, they demolished Feyenoord and Kilmarnock in the opening rounds. A narrow 4-3 aggregate win over Anderlecht in the quarters meant a trip against defending champions Inter.

A 1-0 win at home was followed by a 1-1 draw in Italy, meaning Madrid were through to yet another final.

Partizan Belgrade would put up an admirable fight, going ahead in the 55th minute. However, Madrid would come storming back in six minutes to turn the tide. However, they would hold on to win and earn another trophy. It would be their last European Cup triumph for a long, long time.

By the time Real Madrid made their way back to the final, the competition had been rebranded to the Champions League. Juventus were the favourites, given this was their third consecutive finals appearance. However, Madrid had shown their mettle throughout the tournament, dumping out holders Borussia Dortmund in the semis.

They had several superstars in their lineup, including Raul, Fernando Morientes, Clarence Seedorf, Roberto Carlos, and others. It was Predrag Mijatovic who scored the winner and earned Madrid their first Champions League crown. The upcoming few years would prove to be extremely fruitful for Los Merengues.

One of the most lopsided finals in the history of the competition. It was the first time two teams from the same country have contested the showpiece affair. Madrid were brimming with talent, at the dawn of their Galacticos era. Carlos, Raul, and Morientes were joined by Steve McManaman, Nicolas Anelka, and Iker Casillas among others.

Except for Raul, all three strikers scored one goal apiece, with Valencia never really in the contest. Madrid would announce their comeback in Europe in style, with two titles in three years. However, the party was still not over.

The finale is best remembered for Zinedine Zidane’s wonder goal. Bayer Leverkusen had leveled matters up in the 15th minute after Raul had given the Spaniards the lead. It would be nicely set up for Zidane to make his mark on the game.

A crisply-hit volley, with his left foot from the edge of the penalty box, would be the death knell for Leverkusen. Madrid would hold on for the win and pick up their sixth Champions League crown.

La Noveno was theirs, and Real Madrid were the top dog in Europe once again. The team returned mostly the same members as their 2000 squad, with Luis Figo and Zidane the new major additions. The Galacticos era had begun, but Madrid would not be able to win another Champions League title for more than a decade.

The Battle of Madrid with La Liga winners Atletico Madrid squaring off against their bitter rivals. Diego Simeone’s side were on top after an early goal from Diego Godin. However, Sergio Ramos popped up in the 93rd minute with a bullet header to level matters. The game went to extra-time where Madrid pulled away devastatingly.

Gareth Bale, Marcelo, and Cristiano Ronaldo all scored to put Atletico to the sword. It was a dominant win to secure the long-awaited La Decima. The manager at the time was Carlo Ancelotti himself, and he would be looking to repeat the trick in 2022.

The chance for revenge came soon to Atletico. This time, it was Real Madrid who took the lead through Sergio Ramos in the 15th minute. Antoine Griezmann missed a penalty in the second half before Yannick Carrasco leveled matters up. There would be no further goals in extra-time with the match heading to penalties.

Madrid would score all of their opening four kicks before Juanfran missed Atletico’s fourth. That left Cristiano Ronaldo to net the game-winning penalty, which he duly managed. La UnDecima was Real Madrid’s and this signaled the start of a dynasty for the club.

Another lopsided final in favour of Real Madrid. Cristiano Ronaldo gave Los Blancos the lead but Mario Mandzukic equalized minutes later with a superb goal. However, the floodgates would open in the second half with Juventus all at sea.

Ronaldo added a second, with Casemiro and Marco Asensio both netting too. The Old Lady were blown away as Zinedine Zidane led his former club to a successful defence of their Champions League crown.

A final with various talking points. Madrid picked up their third consecutive Champions League, but the match had a little bit of everything. Sergio Ramos and Mo Salah got in a real tangle early on, which caused Salah to go off injured.

Karim Benzema opened the scoring in the second half after charging down an attempted throw from Loris Karius.

Sadio Mane would equalize soon after before Gareth Bale scored one of the best goals in the competition’s history. Bale would add another with a long-range strike that seemingly went through Karius.

The goalkeeper would catch a lot of heat, but Mane did strike the post. Nevertheless, Zidane had managed an incredible feat of leading Madrid to three titles. However, Liverpool would be back in 2019 to clinch their sixth crown.

The 14th crown came in very Real Madrid fashion. They were surviving on late heroics in the knockout rounds, needing Karim Benzema to bail them out. He was backed up by Luka Modric, Vinicius Jr., Rodrygo, and others.

However, the 2021-22 campaign started to feel inevitable once Madrid started coming back from near eliminations. PSG, Chelsea, and Manchester City all felt the wrath of Don Carlo and co. in the Champions League.

Liverpool were the slight favourites in the final, and had the much better chances. However, Thibaut Courtois was unbeatable in goal before Vinicius Jr. hit the game’s only goal. Los Blancos would hold on to win their 14th crown, and make history once again.