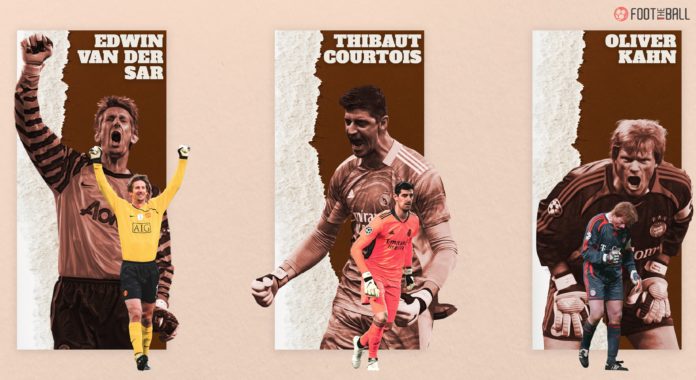 The 2022 UEFA Champions League final was not a classic but had several intense moments. The game was delayed by more than 30 minutes as several fans were unable to enter the Stade de France.

Once the match got underway, Liverpool were the dominant side throughout the encounter. However, it was Real Madrid who emerged victorious like they had done 13 more times in the past.

Apart from creating and breaking several records, it was a wonderful night for Thibaut Courtois. The Real Madrid shot-stopper had a stellar night, denying Sadio Mane, and particularly Mo Salah time several times.

Read also: How game-changer Vinicius Jr. has evolved into one of the world’s best attackers with Real Madrid

It is not an understatement to suggest that Courtois was the key reason why Los Blancos were crowned champions on the night.

After the match, he gave a bombastic interview, demanding “respect.” Nevertheless, it was one of the all-time great performances by a goalkeeper in Champions League final history.

In honour of Courtois, FootTheBall recalls the several greats who went before him and how they cemented their name in folklore.

The first-ever Champions League final pitted one of the strongest squads in football, AC Milan, against Marseille. Barthez was just 22-years-old, having joined the French giants in 1992.

Up against him were Marco van Basten, Frank Rijkaard, Roberto Donadoni, among others. Barthez would more than hold up his own against the bonafide stars, as Basile Boli’s goal before halftime would prove to be the game-winner.

Moving on to day three of “Do You Remember?” OM edition 🙌

Fabien Barthez. The French legend had two stints with @OM_English, once with hair and once without.

Considered one of the greatest keepers to ever play the game, Barthez was only 21 when Marseille won the UCL in 1993. pic.twitter.com/sxFZAADrxr

Milan would be back in the final the following year and win it, but 1993 belonged to Marseille. Barthez would become the youngest goalkeeper to win the competition, a record since broken by Iker Casillas in 2000.

It remains the only triumph of a French side in the Champions League till now.

The big Dane was one of the key components of Manchester United’s treble-winning season. Schmeichel would be caught out in the opening minutes by a deflected free-kick but was imperious after that. Carsten Jancker and Basler again would be denied by Schmeichel. He was also fortunate a shot clipped off the post before landing in his arms.

The injury-time would be immortalized by the comeback heroics, but take nothing away from Schmeichel. He was masterful right throughout the tournament and celebrated with a cartwheel after the result was secured.

The Bavarians would be back in the final two years later, facing a spirited Valencia side. The match would see three penalty kicks being awarded, with Valencia scoring theirs and Bayern netting of their own.

The game would remain level through extra-time, and in the penalty shootout, it would be Kahn distinguishing himself. Bayern scored two of their opening three kicks, while Valencia hit two of two.

Then Kahn saved from Zlatko Zahovic’s effort, before producing an outstanding stop to deny Amedeo Carboni’s strike. It headed to sudden death, where Thomas Linke scored to put the onus on Mauricio Pellegrino. Kahn produced his third save of the shootout to clinch the trophy for Bayern.

The Miracle of Istanbul would be incomplete without Dudek. He had an ongoing battle with Andriy Shevchenko, with the goalkeeper coming out on top every time. The match would be decided on penalties, where Dudez would excel again.

Happy birthday to former Red and one of the heroes of Istanbul in 2005, Jerzy Dudek, who turns 41 today! pic.twitter.com/vSoibZTAl4

Dudek saved the very kick from Andrea Pirlo too. Liverpool were in the driving seat, and despite John Arne Riise missing, it just needed one more miss from Milan to end the game.

Fittingly, it was Shevchenko with the do-or-die penalty, and Dudek pulled off a wonder save, saving with his left hand after having already dived to his right.

The Dutch goalkeeper had already won the competition with Ajax in 1995 and was using all his experience to help United. Van der Sar stopped Rio Ferdinand from scoring on his own in the first, and only a deflected shot helped Frank Lampard breach his goal. However, he would prove to be invaluable in the penalty shootout.

Van der Sar was mostly powerless to stop the earlier attempts, only getting close to Ashley Cole’s effort. However, after John Terry’s infamous miss, Van der Sar would make the pivotal stop.

He motioned to his right as if to dive there, as the previous penalties had been. However, Nicolas Anelka shot to his left, and Van der Sar’s right which the goalkeeper was able to guess and make the stop. Manchester United were champions of Europe once again.

Four years after being on the losing side, Cech would come good against the big Bavarians. He was on top his duel with Arjen Robben, saving a great chance with his left foot. Bayern would take the lead, but Chelsea leveled through Didier Drogba.

In extra-time, Robben had the best chance to seal the game’s fate but his penalty was saved by Cech.

The very next time, Cech pushed Bastian Schweinsteiger’s effort onto the past. That left Drogba to score the winning penalty which he duly did.

The Belgian goalkeeper had been a big reason for Real Madrid being so dominant in their romp to the La Liga title. Courtois was on fire right from the first minute as Liverpool were attacking in waves.

He made his first save from Mo Salah, dropping low to stop him. The best save of the early exchanges came against Sadio Mane, who fierce strike was tipped onto the post.

9 – Thibaut Courtois' nine saves tonight is the most on record (since 2003-04) of any keeper in a single #UCLfinal. Impenetrable. #LIVRMA pic.twitter.com/zIKhl5zaXT

After Madrid took the lead, Courtois denied Salah with a very firm save that kept his side in the lead. Moreover, he was extremely comfortable in the air, collecting crosses and being in command of his area. The end result was, of course, the ultimate prize.