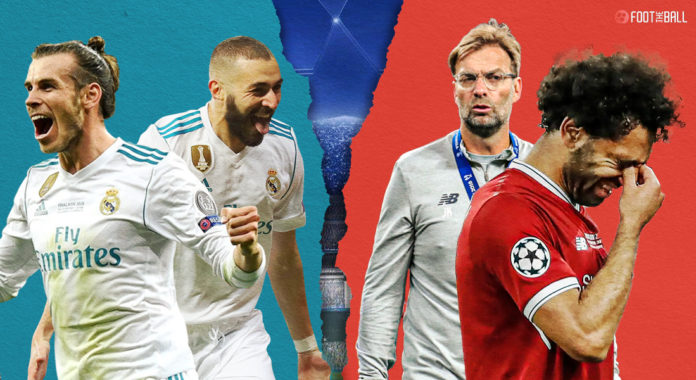 History does repeat itself in football. Real Madrid and Liverpool meet again in the final of the UEFA Champions League. These familiar foes clashed in the quarter-finals last season, with Madrid running out 3-1 winners on aggregate. The result and scoreline would have given Liverpool flashes of deja vu. Los Blancos sealed their Champions League treble in 2018 by putting the Reds to the sword.

No wonder, Mo Salah has spoken of wanting to face the Spanish giants again. 2018 final is best remembered for Loris Karius’s allowing soft goals and Gareth Bale’s wonder strike. The former will definitely not feature this time, while the latter is set to leave in the summer.

And Karim Benzema scored against Liverpool in 2018 after a howler from Loris Karius. 😬

Benzema has 15 #UCL goals this season. He’s two away from Cristiano Ronaldo’s record for a single season set with Real in 2013/14. 🎯 pic.twitter.com/eeBAFW4l8j

However, the final from four years back had many more differences than people care to remember. The two sides have come a long way, with Liverpool having their quadruple hopes extinguished by a point. It serves well to look back upon the lessons learned and how the teams have fared since then.

Liverpool were making their first final appearance since 2007. Meanwhile, Madrid were aiming to complete the three-peat. The match started off evenly, with both teams exchanging blows.

The first major talking point arrived just before the half-hour mark. Salah injured his shoulder after challenging for a loose ball with Sergio Ramos and had to be subbed off.

A sad way for Salah's season to finish 😢#UCLfinal pic.twitter.com/6v2Y0MKNBe

His first, a glorious overhead, bicycle kick that counts as amongst the best in the competition. Moreover, Bale would go on to score another goal, a piledriver from more than 40 years, that seemingly went through Karius.

Liverpool would be unable to mount a comeback, and Madrid went on to claim their 13th European crown. It was Jurgen Klopp’s sixth finals loss in seven attempts. Moreover, Karius’ career at the club was all but finished after he received death threats for his mistakes.

However, it would emerge later on that the goalkeeper had suffered a concussion, which may have impaired his abilities.

Doctors have confirmed Loris Karius suffered concussion in the UCL final that may have impacted his performance.

It was caused by a Sergio Ramos elbow. pic.twitter.com/UrqLnxISIb

Nevertheless, Madrid would also undergo changes in the ensuing summer. Zinedine Zidane stepped down as manager, while Cristiano Ronaldo would leave for Juventus.

It cannot be emphasized enough how different Liverpool look now from that final. Alisson would join in 2019, becoming one of the best goalkeepers in Europe. Joel Matip emerged as a solid partner beside Virgil van Dijk.

Liverpool went on to reach the final again in 2019, winning it against Tottenham Hotspur. Meanwhile, Madrid regressed in the European scene, struggling to reach the latter stages.

Klopp has reinvented the attacking scene at Anfield. Diogo Jota and Luis Diaz have been two excellent additions, who have elevated the whole team. Thiago’s signing in 2020 has been a gamechanger in midfield, and his partnership with Fabinho has been crucial.

On the other hand, Madrid have uncovered a gem in Vinicius Jr., while the midfield trio remains ever-present.

🎙| Kroos: “The way we got to the final was different, I hadn't experienced something like that. If you invited me to explain it, I can't. I can only say that believing is important.” #UCL pic.twitter.com/SFah8AX6sY

They will be missing some former stalwarts in Raphael Varane, Sergio Ramos, and Marcelo. Moreover, Eder Militao, Ferland Mendy, and David Alaba have struggled against top-quality oppositions already.

They have been bailed out by the heroics of Benzema time and again, but Carlo Ancelotti would want his side to be more solid at the back. Hard to do, when Liverpool have been in such an unforgiving mood in 2021-22.

Liverpool and Real Madrid are almost neck-and-neck in Champions League history. Los Blancos have won four encounters, with the Reds triumphing on three occasions. The big difference in 2022 will be the players between the two sides.

Madrid have not changed their look much, except in defence and goal. The midfield trio, coupled with Benzema will be same.

Real Madrid and Liverpool are ready to fight for the Champions League title on Saturday 💪🏆 pic.twitter.com/u31WQUZMqo

However, Liverpool have five world-class goal scorers to choose from, with a settled defence and the best fullback partnership in Europe. Moreover, they have also won both the domestic cup competitions and are in line to complete a treble.

Madrid have struggled in three of their six legs since the round-of-16 stage. The overdependence on Benzema could prove to be their undoing. The 2018 final is firmly in the rearview, as a new dawn beckons.