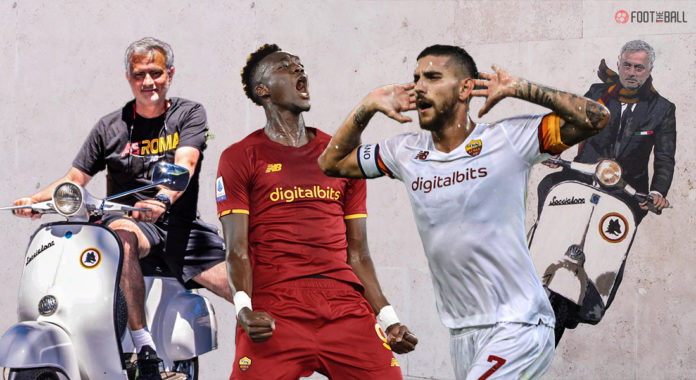 Roma making their return to the final of a European competition with Jose Mourinho as a manager? The scriptwriters are having a field day. The Giallorossi won the inaugurual UEFA Conference League. It has been 31 years since Roma has reached a match of this magnitude, losing to Inter in the 1991 UEFA Cup final. Of course, it had to be Jose Mourinho to help them win in Europe.

The fact that it took Mourinho to achieve this makes it all the more impactful. Roma and Jose Mourinho have been a wonderful and unique fit ever since the 2021-22 season began.

As the campaign winded down, it finally looks like Mourinho has found his true home in many years after dismal spells at Manchester United and Spurs, which followed on the back of a torturous half-season at Chelsea.

There have been many big and small contributing factors to this relationship blossoming. Roma needed Mourinho, as much as he did the grand, proud club.

There are similarities to how Roma and Jose Mourinho entered the summer of 2021. The manager was out of a job, having been fired by Spurs in mid-April. On the other hand, Roma had had an underwhelming season under Vitor Pereira and were looking for a change.

The club are delighted to announce an agreement has been reached with Jose Mourinho for him to become our new head coach ahead of the 2021-22 season.
#ASRoma pic.twitter.com/f5YGGIVFJp

Having managed Inter successfully in the last decade, the club from the capital announced Mourinho as manager. This news caught a lot of observers by surprise, as many had thought he was finished at the highest level. Speaking at his unveiling, Tiago Pinto, Roma’s general manager said,

“We were blown away by Jose’s desire to win and his passion for the game: no matter how many trophies he has won, his primary focus is always on the next one.

He possesses the knowledge, experience and leadership to compete at all levels. We are supremely confident Jose will be the perfect coach for our project, for both our immediate and long-term future.”

This was certainly a ringing vote of endorsement by the club’s board. Moreover, Mourinho was backed to the hilt in the transfer window. Roma spent close to €100m signing Roger Ibanez, Rui Patricio, and Tammy Abraham among others.

Mourinho had a special connection with Abraham, having known him since his Chelsea days, and vowed to bring out the best in him.

The season got off to a hot start with three consecutive wins in the league. The third in this series was Mourinho’s 1,000th win as a manager and came after a last-minute winner from Stephen El Shaarawy. Mourinho celebrations down the touchline become an instant cult classic. However, things would not continue to be so rosy soon.

The humiliation in Norway

Roma lost four times in Serie A between September and October. However, the most damaging results came in the UEFA Conference League. Facing Norwegian side Bodo/Glimt, Mourinho endured the most humiliating loss of his career. Bodo/Glimt smacked six past the hapless Italians, leading Mourinho to quip,

It was the first controversy between the players and the manager. Mourinho was extremely unhappy with the lack of squad depth, while others perceived it as him whining again.

UEFA Europa Conference League is a competition that even the major favourites cannot take lightly, as witnessed by Roma's shock humiliation in Norway.

Bodø/Glimt ran riot against second string Roma team, scoring at will throughout the match. 👏👏#UECL pic.twitter.com/Gf3CeuXf2K

Moreover, given Mourinho had made a habit of speaking like this in the past made it worse. Things would not get better for Roma in the short term either. The Giallorossi would lose to AC Milan, before managing a 2-2 draw at home to Bodo/Glimt.

Venezia 3-2 Roma: A great game, but not one that Roma & Jose Mourinho will want to remember. pic.twitter.com/fWs8oo090F

However, the worst loss in this span of three weeks would be a 3-2 defeat away to newcomers Venezia. December started with two defeats to Bologna and Inter. Speaking after the second defeat, Mourinho stated

The detractors had their knives out by then, while the most hopeful ones feared a repeat of the past.

A turnaround on and off the pitch

2022 started horribly with two losses on the trot against AC Milan and Juventus. Roma led 3-1 at home to the Old Lady, before collapsing to let in three goals within seven minutes. Many thought that it was Mourinho’s last game with Roma, given everything history had shown with Manchester United and Spurs.

However, Jose Mourinho and Roma reaffirmed their commitment to one another and vowed to carry on fighting. In a change from the past, Mourinho turned up his old flame to lead Roma on a 12-game unbeaten streak till April.

14 goal involvements in Serie A this season for Lorenzo Pellegrini – his best return yet! 🔥#ASRoma | @LorePelle7 pic.twitter.com/VdqVUKD7tW

Roma were battling for the final Champions League spot. Mourinho connected massively with the fans, spurred on by the Ultras, and won their trust. Moreover, they were making headway in the Conference League, reaching the semis against Leicester City.

Loan signings Ainsley Maitland-Niles and Sergio Oliveira also settled in quickly. There was the sense that something special was in the offing, both in Serie A and Europe. Could the “Special One” keep the momentum going on two fronts?

Roma would eventually fall short of qualifying for the Champions League next season. A record of three defeats and two draws hardly helped their cause. A final day win over Torino ensured Europa League football in 2022-23.

"At the moment I'm with Italy. If all goes well I'm with Italy to the end." 😤🇮🇹@cvolpato10 on 𝒕𝒉𝒂𝒕 question, his passion for football and working with Jose Mourinho at @OfficialASRoma.

However, the celebrations had already started by then. Roma defeated Leicester City 2-1 on aggregate, with Tammy Abraham scoring the winner in Rome. Mourinho’s tears told the tale of a manager who had finally achieved salvation at last. His words told as much,

“Over the years I’ve become less egocentric and more like a father… It’s a victory of a family. Not just the one that was on the pitch and on the bench but also inside the stadium. That is our greatest achievement, this empathy and sense of family we have created with the fans”

Roma and Mourinho cemented the special bond between the two. He continued his record of making a European final with every club he has managed. Moreover, the fact that Roma had not reached this far in more than three decades made the feat even sweeter.

Feyenoord stood in the way between Roma and the ultimate prize. Mourinho became only the third manager after Udo Lattek and Giovanni Trappatoni to win three separate UEFA competitions.

Ex-Inter president Massimo Moratti, who was in charge during the 2009-10 treble-winning season, said of Mourinho,

“Beyond being a very serious professional and an excellent coach, he manages to create empathy within the team. He can pull everyone and always gives you the feeling that you’re relying on someone who knows what he’s doing.”

There’s always something enigmatic and unpredictable about Mourinho. Roma have proven to be the perfect platform. Abraham had his best-ever personal campaign. Lorenzo Pellegrini, Eldor Shomurodov, Felix Afena-Gyan are some players who had a fantastic season.

The final of the Conference League was the most special occasion in a long while for Roma and its supporters. Mourinho said so himself, after the semis,

“This is a giant club without the trophy room in relation to the social dimension of the club. This is not a trophy, it’s only a final, but it means a lot to them. My emotion was for them.”

This season has been a lesson in why the Special One cannot be written off. Jose Mourinho and Roma seized the day in Albania. Now, they can move onto even bigger things soon.