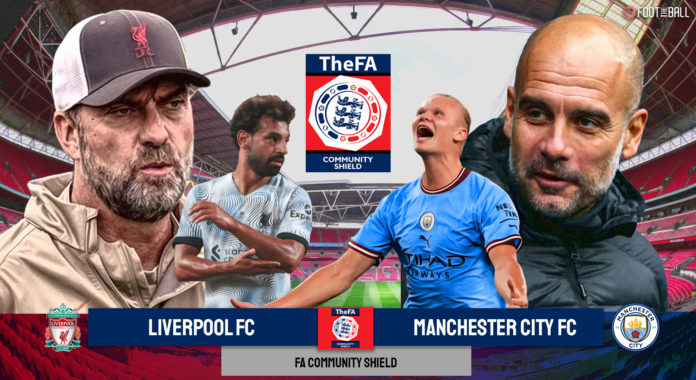 The curtain raiser to the 2022-23 Premier League is upon us. Liverpool and Manchester City clash in the FA Community Shield after differing preseasons.

The Reds were slaughtered by Manchester United in their first match, losing 4-0. They bounced back with consecutive wins over Crystal Palace and RB Leipzig. However, their final practice match ended in a 1-0 defeat to Salzburg.

Jurgen Klopp will be hoping to shake off the blues in time to have a competitive core ready. Darwin Nunez has blown hot and cold so far.

Fabio Carvalho has looked really sharp and lively behind the front three. Those two should be starting, with Luis Diaz giving them even more speed. City have been the arch-nemesis for Liverpool over the past few seasons.

Even though it is a friendly of sorts, there will be no quarters given by Klopp and co.

City are having a splendid preseason. New signings Erling Haaland and Kalvin Phillips have settled well. Moreover, the striker even scored in their win over Bayern Munich.

City have lost Raheem Sterling, but have enough quality to make up for it. Pep Guardiola has also spoken highly of academy stars like James McAtee and Josh Wilson-Esbrand. Therefore, it will be no surprise if a few of the members are under-20 in the final team.

City are known to approach every fixture as vital. This is even more important in 2022-23, with their opponents having strengthened too. The good news is that they can hit the right strides when necessary.

Jack Grealish has been in solid form, while Joao Cancelo has been given the number 7 in view of his all-round showings. Therefore, the match will certainly be a close encounter, much like their league meetings in 2021-22.

Liverpool tried out many youngsters in their preseason fixtures, but expect them to revert back to a strong eleven.

Who is Calvin Ramsay, the young right-back from Aberdeen, signed for the future?

City are also likely to field both of their new signings, with academy stars on the bench.

It is hard to look past Mo Salah after the 2021-22 that he had. The Golden Boot winner was on sizzling form as Liverpool almost managed the domestic treble. Salah was putting defenders on skates, twisting this way and that.

City are well aware of his abilities, given he went past the entire backline to score against them. Moreover, the fact that he can travel quickly with the ball means Cancelo will have a problem if out of position.

Liverpool have excellent ball-players in Thiago and Carvalho, while Trent Alexander-Arnold’s linkup with Salah is telepathic.

There is a lot of positives in this setting for Klopp, who would want Nunez to get involved too. If Salah can combine with the Uruguayan, there is every chance of scoring.

For City, they will bet big on Haaland opening his account in England. The former Borussia Dortmund hitman is an apex predator from a multitude of areas. Haaland can match up with Ibrahima Konate and Virgil van Dijk with his physicality helping in holdup play.

Moreover, he is also extremely impressive in aerial duels. New signing Kalvin Phillips will have to be very aware of his positioning and the runs of Haaland.

City also have Grealish and Mahrez down the flanks: two players who can deliver brilliant crosses and score themselves.

Therefore, it is clear that Liverpool’s backline will have a big job. Haaland can also target down the sides, given the advanced positioning of Alexander-Arnold and Robertson.

It is always tough to call a winner in these matchups. The two teams are very evenly matched, meaning it will come down to the little things. Whoever gets the basics right will be lifting the Community Shield. FootTheBall predicts a 2-0 win for the Cityzens.