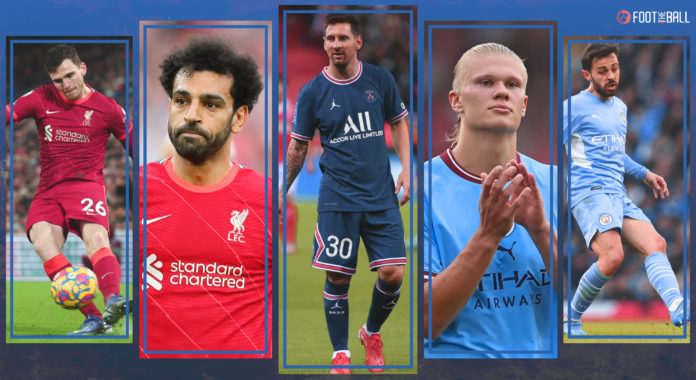 In the world of football, the quality of left-footed people has always come up almost spontaneously, because it’s more pure and transparent. It’s not a coincidence that some great players of the past like Diego Maradona and Roberto Carlos preferred the use of the left foot and still today seeing lefties at work is a pure show. There’s an inspiration in the movements, in the way of kicking the ball, in coordination, almost everywhere.

A left-footed football player is always regarded as a special gift for any football 11. Only 19% of professional footballers have a preference for their left foot. Left-footed players are often considered to possess an exceptional inborn talent for football. They are very skilful and creative wizards; their decision-making is also far more elusive than the right-footed.

Keeping that in mind, FootTheBall looks at the best left-footed players in world football.

The Algerian winger was an unknown quantity when he moved from Le Havre to Leicester City in 2014 for an undisclosed fee, believed to be around £400,000. The left-footed winger prefers playing on the right flank, where he can cut inside and shoot on goal or make deliveries into the penalty area with his stronger foot.

Mahrez is a captivating talent who possesses exceptional balance and control and is seemingly capable of bamboozling defenders at will with one of his trademark mazy dribbles. He is, however, a versatile player who can play anywhere along the front line, whether as an attacking midfielder in the centre, a winger on either flank or even a false nine upfront. As a result, it should come as no surprise that he is now regarded as one of the best left-footed players in the world.

The Arsenal academy product has been in sensational form for the Gunners and Mikel Arteta since making his debut in 2018. The English international has been part of the Arsenal youth setup since 2008.

Mikel Arteta usually prefers a 4-2-3-1 system where Saka is deployed on the right-wing. During his early days in an Arsenal shirt, Saka was also deployed as a left-wingback because of the fact that he has a wand of a left foot. The 20-year-old has cemented his place in the Arsenal starting 11 for obvious reasons, with his close-control and dribbling being his key attributes.

Romelu Lukaku, a left-footed striker, is one of Europe’s most lethal finishers in the world. Lukaku was known for his aggressiveness in his early years, which he frequently used to get past opponents and score goals. The Belgian international had made a return to Stamford Bridge in 2021, only for it to turn into a disastrous season for him and return to Inter Milan on loan.

The best thing about Romelu Lukaku is his versatility. He is arguably the best all-around centre-forward in the world right now. His physical and tactical versatility allows him to play as an outright striker or as a poacher on the flank, but his preferred position is as a target-man in the centre of the field.

Replacing the iconic David Silva at Manchester City seemed like an impossible task, but Bernardo Silva has slotted into the role fairly well. Not only does Bernardo share the same name (Silva) as David, but he is also left-footed like his predecessor.

Bernardo Silva has 29 league goals in 168 league matches and has also won 4 Premier League titles on since joining the Sky Blues.

Leroy Sane had won two Premier League titles in four years with Pep Guardiola’s Manchester City. He is a professional footballer from Germany who currently plays as a winger for Bundesliga club Bayern Munich and the German national team. Sane won the Centurion with City in 2017, after previously playing for Schalke.

His left crosses are mostly driven, whereas his right crosses are mostly in the air. Sane frequently takes advantage of the space provided by a high-block and goes for runs. The most important and enjoyable aspect of his game is the ability to create, find, and move through space. Sane excels at what he does best, whether it’s attacking spaces or dropping down to create space.

Juventus star Paulo Dybala is well-known for his ability with his powerful left foot. The Argentine international has recently made a move from Turin to Rome after his contract with Juventus expired in the summer of 2022.

“Dybala is a fine player who is also very intelligent,” Allegri once said. “He enjoys playing almost as a trequartista, connecting the forwards to the midfield.” He has very specific plans for what he wants to do.” Dybala is known for his dribbling skills in tight spaces, close ball control, and ability to beat opponents one-on-one. He is also known for his ability to defend or hold up the ball for teammates with his back to the goal, as well as his ability to defeat opponents in one-on-one situations.

Since his move from Hull City to Liverpool, Andy Robertson and the deliveries from his left foot have been a joy to watch in the Premier League. He had formed a formidable partnership with Sadio Mane on the left flank before the latter’s move to Bayern Munich in the summer of 2022.

Jurgen Klopp has unearthed a gem, especially given the fact the amount of money managers would spend for the quality of Robertson at this time.

Messi’s arrival at PSG was expected to take the Parisians to another level and, most importantly, lead them to UEFA Champions League glory. But the Argentine’s debut season in France had not been good (by Messi’s high standards).

Nevertheless, he still remains one of the best left-footed players in the world, and there is optimism that we will all see the real version of Lionel Messi this season.

Erling Haaland, who moved to Manchester City this summer from Dortmund, is already considered a living legend by many. Because he is still so young, Haaland’s goal-scoring ability is particularly impressive.

Haaland reads the defence well, makes great off-ball movements to confuse the defence, and starts in open space. Haaland is extremely difficult to stop due to his incredible acceleration and speed, as well as his precise shooting with his left foot. His incredible athleticism and finishing ability are weapons that any club would love to have. Furthermore, at such a young age, he has the potential to become one of the best players of this generation. He is one of the best left-footed football player in the world.

The Egyptian’s form last season in all competitions saw Liverpool chasing an unprecedented quadruple. The Reds won the League Cup and the FA Cup and also reached the UEFA Champions League finals where they narrowly lost to Real Madrid.