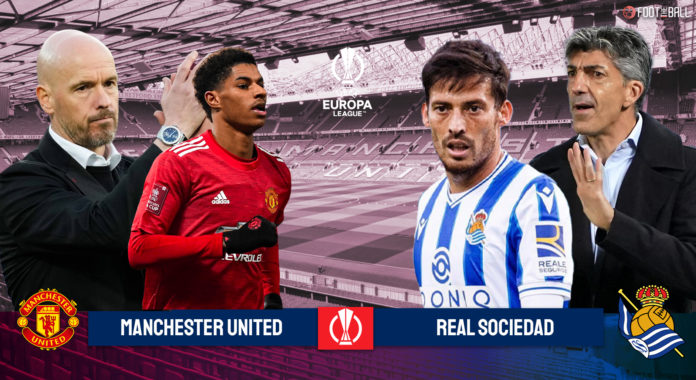 Following two days of quality in Europe’s top-tier competition- the UEFA Champions League, UEFA’s other two competitions get their chance to shine with the Europa League and Conference League first group games played.

The Europa League might not be filled with the glamour and high-profile names when compared to the Champions League, but it is as unpredictable as the UCL. With some mouth-watering fixtures on display and a few big teams also participating, Europe’s second-tier competition promises to be a belter. One of those teams in the running are Manchester United who are picking up form after a disastrous start to the new campaign under Erik ten Hag. Eintracht Frankfurt are the defending Champions and the Red Devils would very well want their name to be etched on the trophy come the end of the 2022/23 season.

The Europa League group stages begin with one of the promising fixtures of the round when Spanish side Real Sociedad travel to Old Trafford to face the resurgent Manchester United. Erik ten hag’s men had a torrid start to the new season, losing 2 games in a row. Since then they have won 4 on the bounce, including 2 clean sheets away from home against Leicester City and Southampton.

Real Sociedad haven’t had the brightest of starts themselves in the Spanish top-flight. After 4 matches played, the Basque-based club sit in 7th position, winning 2 of those matches and drawing and losing 1 each.

This promises to be a nail-biting match, much like United’s most of the Europa League matches last term. Manchester United are favourites but Spanish football teams are a different beast when it comes to European competitions.

Erik ten Hag’s decision to drop both Harry Maguire and Cristiano Ronaldo has payed dividends. The Red Devils have been performing at their best without the duo, although the Dutch manager could recall them both for this match, with squad rotations and a hectic schedule in mind.

Ten Hag and Manchester United have no new fresh injury concerns with only Anthony Martial a long-term absentee in the squad. With a long season ahead, the United manager will make some changes.

Real Sociedad on the other hand have a long list of absentees. The most major player to miss out for them this season has been Mikel Oyarzabal. The Spanish forward who has been in blistering form for Sociedad for the past couple of seasons and his creativity on the flanks has been thoroughly missed. Apart from that, some players with short-term injuries who will miss the midweek clash would be Diego Rico, Carlos Fernandez and Martin Merquelanz.

For all his transfer rumours swirling around the media this summer, Cristiano Ronaldo remains a Manchester United player. Europa League is the perfect stage to show his manager that he has still got it at the age of 37.

The Portuguese forward might not be the player he once was and according to popular opinion does not fit the current system, but he is still a leader on and off the pitch. Ronaldo will start the game against Sociedad and Ten Hag will count on him to produce the goods.

David Silva has been the epitome of success following the player wherever he goes. The Manchester City legend left the Etihad outfit back in summer 2020 to join Real Sociedad and has continued to put on a show whenever given the chance. In 2 seasons, the former Spanish international has 4 goals and 9 assists to his name. Silva already knows a thing or two about playing against Manchester United, after facing them on numerous occasions on Manchester derbies. Real Sociedad fans will hope, Silva produces his magic once more against his once, noisy neighbours.

On paper, Manchester United are heavy favourites to win this match, and more so after their recent upturn in form. But like they say, a football game is never played on paper. Real Sociedad have all the tools to get the better of Erik ten Hag’s men on the night with a much changed United side.

Manchester United do have the home advantage with them, but Spanish teams have had the better head-to-head record against English teams in European competitions. It will be a close match, and individual brilliance might affect the result come the full-time whistle. FootTheBall predicts Manchester United 2-1 Real Sociedad.