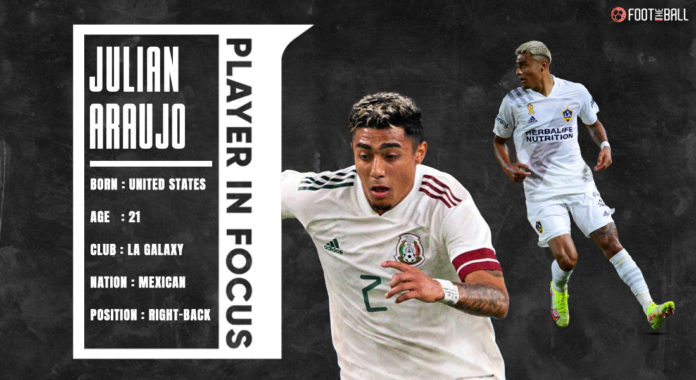 There was a time when Major League Soccer (MLS) was considered a league where players well past their time would go to earn their final big paycheck. While many players still do it today, in recent years, the league has become one of the best in developing players.

Christian Pulisic is one such example: goalkeeper Matt Turner, who is Arsenal’s second-choice shot-stopper, is another. Then there is Ricardo Pepi and Auston Trusty. There is no talent shortage in the league, and Julian Araujo is the latest to come out.

The 21-year-old is one of the best right-backs in the league. Julian Araujo was born in Lompoc, California, United States and started his footballing career at FC Barcelona’s official Residency Academy in Casa Grande, Arizona.

Araujo would move up the ranks quickly, and his talent would be noticed by one of the biggest teams in MLS. In 2018, LA Galaxy would snap him up. Then, they would send him to LA Galaxy II, their reserve team.

He would represent the reserve team for two seasons before being promoted to the first team. From there on, the youngster has become a mainstay in the team.

How good is Julian Araujo?

In his first season with LA Galaxy II, Araujo played 18 times, providing one assist. ‘His performance attracted the attention of first-team manager Guillermo Barros Schelotto. As a result, the Argentine would promote the youngster to the first team. In his first season, he scored one goal and provided two assists. This was an impressive return for a then 19-year-old in his first senior season.

I’ll be going deeper into the profile & style of Julian Araújo tomorrow, but, what I can tell is this.

Never understood how hasn’t he been acquired by a European club. Promising.

Next season he would become an integral part of the LA Galaxy team. In that season, he would provide two assists. He was one of the few positives in a disastrous season for the team where they finished 10th. Next season would be Araujo’s finest, where he would make 32 appearances. The right-back would provide six assists and averages 1.1 key passes per 90 minutes.

In the current season, he has already racked up three assists this season. Araujo is a typical modern-day fullback. He is swift and brilliant at dribbling, crossing, and overlapping. However, what separates him from the rest is his brilliant defending be it in the air or ground. Due to his pace, Araujo rarely gets caught during opposition’s counter-attacks.

It is why clubs such as Porto and Barcelona were interested in him.

Orkun Kokcu: A special midfielder with a bright future

Julain Araujo burst on the scene at MLS in 2019. However, it was only in 2021 that he would become one of the best in the league. According to fbref, the Mexican completes 49.31 passes per 90 minutes, ranking him in the top 13 percentile of fullbacks. Out of those, he makes 22.45 medium passes per 90 minutes, which is a huge bonus considering his position.

Araujo is also good at creating chances, especially from live balls. The right-back’s impeccable crossing comes helpful in these situations. According to fbref, he is responsible for 1.98 shots per 90 minutes. If he had a more efficient teammate as a striker, his assists number would’ve been even better.

He also has decent pressure numbers at 15.39 (top 19 percentile). Moreover, his pressure numbers in the attacking third are even better, which will be useful for top teams who give pressing in high areas utmost importance in their playing style.

Julian Araujo is a gifted right-back and has already proved himself in MLS. He also represents the evolution of league. Unlike a few years back, the MLS is now an established league producing many young players. The league’s quality has also increased, so players are now attracting interest from across the Atlantic.

Despite LA Galaxy’s underperformance in the league, the team plays an attacking system. This system stresses the need for pressing and attacking fullbacks, which suits Araujo’s game. The MLS already looks like a league he has already mastered. Now is the time for a new challenge where he can improve.

Araujo is also among the few fullbacks who is as adept in attack as he is in defence. This makes him a preferred target for several clubs. Araujo is also not shy of throwing tackles, for his team can be a no-nonsense defender.

He is also 21 years old and can improve a lot. The youngster is also in contention for being a part of Gerardo Martino’s World Cup squad showing his high ceiling.

With the performances he has had, Julian Araujo was bound to attract attention. One of the first clubs to express interest was the Portuguese club, FC Porto. However, the club backed off at the last minute as coach Sergio Conceicao deemed him surplus to requirements. However, even clubs such as FC Barcelona were interested. The Catalan club sent right-back Sergio Dest on loan to AC Milan. However, in the end, they signed former academy player Hector Bellerin to fill the void.

Barcelona wanted to sign Julián Araujo as he's highly rated, impressive talent – one for the future. There was no agreement with LA Galaxy but Barça will monitor Araujo also in the next months. 🇺🇸 #FCB

LA Galaxy were also in talks with Club America, who wanted to buy Araujo. However, the player was against the move as he thought it would not help his World Cup prospects. While any move failed to materialise, it is only a matter of time before he makes it.

For now, Araujo must work hard in MLS and hope it may be enough to get his name on Mexico’s plane to Qatar.