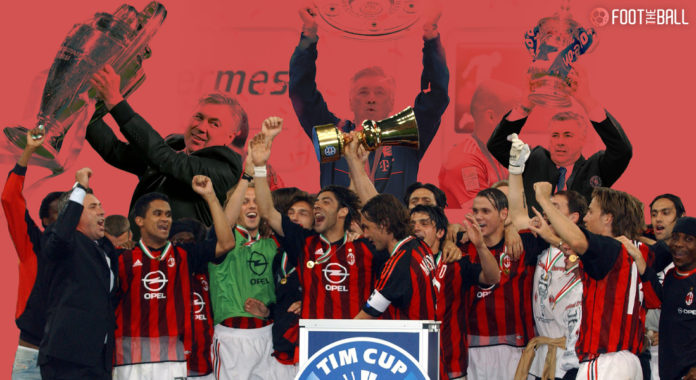 Carlo Ancelotti is one of the most decorated managers in football history having won trophies across Europe. He is the only coach to have won the league in all five of the continent’s big five leagues and one of three managers to have won the Champions League thrice.

As Ancelotti’s Real Madrid side gears up to take on Liverpool in the Champions League final in Paris, let’s take a look at his record in finals of major cup competitions throughout his career.

After making a name for himself at Reggiana and Parma, Ancelotti took over at Juventus from Marcelo Lippi and immediately won a trophy in his first season. Juventus were one of the three winners of the Intertoto Cup, beating Rennes 4-2 on aggregate.

The first leg, played at Cesena, was won 2-0 with Pippo Inzaghi scoring both goals – a precursor to the partnership with Ancelotti that would bring the pair a lot of success later on. Rennes took the lead early on in the return fixture in France but unlikely goalscorers Antonio Conte and Gianluca Zambrotta secured the tie despite a late equaliser on the night.

After being sacked by Juventus, Ancelotti moved back to Milan, where he spent most of his playing career. A quiet first season was followed by an impressive second season in 2002-03 where Milan bagged the Champions League and the Coppa Italia while finishing third in the league.

The highlight though was the victory over his old side Juventus in the Champions League final in Manchester. A cagey match with few opportunities was decided on penalties after Dida, who was backed by Ancelotti amidst criticism in the previous season, saved three kicks in the shootout. Milan became champions of Europe for the first time since 1994.

Just three days after their continental triumph, Milan bagged their second trophy of the season thanks to a 2-2 draw in the second leg at the San Siro against Roma. Ancelotti’s side had gotten most of the work done in the first leg, scoring four second half goals to grab a 4-1 away win in the capital.

Serginho scored a brace in the first leg along with goals from Shevchenko and Ambrosini while Rivaldo and Inzaghi got on the scoresheet in the return. A certain Francesco Totti got all three goals for Roma.

The predecessor to the FIFA Club World Cup was the site of Carlo Ancelotti’s first defeat in a final. Played in Japan, Ancelotti’s side lost to Carlos Bianchi’s Boca Juniors on penalties in the decider.

Tomasson gave Milan an early lead but Donnet equalised for Boca soon after. The penalties from Milan were very poor with Pirlo, Seedorf and Costacurta all failing to score, allowing Boca to take home the trophy.

Ancelotti suffered his second defeat in a final in that infamous night in Istanbul. Having led 3-0 in the first half through a Crespo brace and a first minute Maldini strike, Milan collapsed in the second, conceding three goals in six minutes to send the match to extra time.

🔥Undoubtedly one of the greatest #UCLfinal of all time.

🏆Liverpool went on win 3-2 on penalties after extra time.#LFC|#Liverpool|#UCL pic.twitter.com/84PeaAOxdA

Two years on from the penalty success against Juve, the tables turned on Ancelotti’s side as Liverpool goalkeeper Jerzy Dudek saved two and Serginho shot over to give the English side the most unlikely of victories.

The Rossoneri got revenge for their defeat in Istanbul two years later they beat the Reds in Athens to win their seventh Champions League title. Just like in Ancelotti’s first final, it was a brace from Pippo Inzaghi that got the job done.

ON THIS DAY: In 2007, AC Milan won their 7th Champions League trophy after beating Liverpool 2-1 in Athens.

It was a professional and efficient performance under pressure, something that has since become synonymous with an Ancelotti side.

Few months on from their Champions League success, Milan completed another revenge taking victory by beating Boca Juniors for the FIFA Club World Cup title four years after the Argentinian side denied them the title.

Inzaghi and Palacio traded first half strikes but three goals in twenty minutes in the second half ensured the Italian side’s victory despite a late consolation from Ledesma.

After spending 14 years as a manager in Italy, Ancelotti moved to the nouveau riche Chelsea at the beginning of the 2009-10 season and brought his winning touch with him. The Pensioners won a Premier League-FA Cup double in the Italian’s first season in-charge at Stamford Bridge.

A solitary goal from Mr. Wembley himself, Didier Drogba, was enough to see Chelsea win the oldest competition in world football. They edged out Portsmouth who became the first side since 1997 to reach the cup final and get relegated from the Premier League in the same season.

Ancelotti took over from Jose Mourinho at the Santiago Bernabeu at the beginning of the 2013-14 season, and like in his previous appointments, it did not take long for success to follow. Madrid beat their eternal rivals Barcelona in a dramatic final at the Mestalla to win just their second Copa del Rey in 20 years, and their last win in the domestic cup to date.

ON THIS DAY: In 2014, Gareth Bale produced *that* iconic run off the pitch and around Marc Bartra to score the winning goal in the Copa del Rey Clásico final.

The first of his 13 trophies at Real Madrid. 💨 pic.twitter.com/utLiTUMQX0

Angel di Maria gave Los Blancos an early lead before Marc Bartara equalised for Barcelona in the second half. Five minutes from time, Gareth Bale turned on the after-burners to run from just inside the attacking half and finish past Jose Pinto for an iconic winner.

Real Madrid broke their La Decima curse thanks to Ancelotti when they beat local rivals Atletico in the Champions League final in 2014 in Lisbon. Diego Godin’s first half goal looked like it would give Atletico their first ever European Cup but a late comeback broke Los Colchoneros’ hearts.

Sergio Ramos equalised in the 94th minute to send the game to extra time before three goals in the last ten minutes of the 120 mins from Bale, Marcelo and Ronaldo handed the trophy to Madrid.

Carlo Ancelotti’s side became the champions of the world when they beat Argentinian side San Lorenzo in Marrakesh. It was a routine win with the heroes of the Champions League final from a few months earlier, Ramos and Bale, getting the goals to secure the trophy.

It was Ancelotti’s last major final as his time at Madrid followed somewhat underwhelming spells at Bayern Munich, Napoli and Everton. However, a twist awaited

And the latest feather in the cap of the old guard! A goal by Viniciu Jr., combined with a sterling goalkeeping performance by Thibaut Courtois saw Real Madrid successfully topple a more fancied Liverpool side in the final of UCL 2022. With this victory, Ancelotti became the first manager in football history to win the Champions League four times!