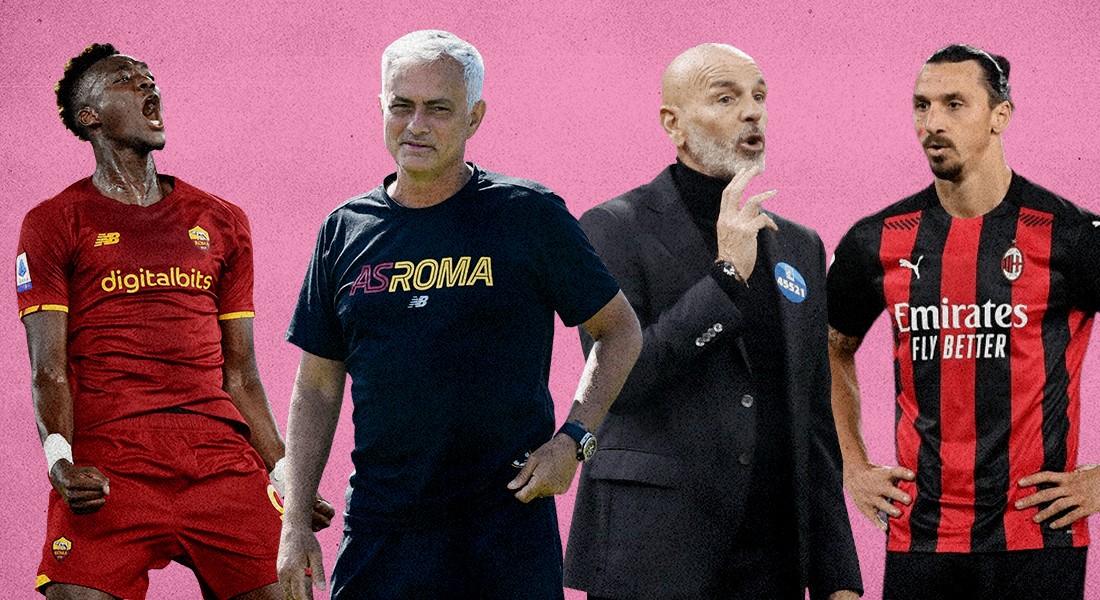 SERIE A MATCH PREVIEW: AC MILAN VS ROMA, PIOLI'S SIDE CHALLENGING FOR THE TITLE AS MOURINHO LOOKS TO BUILD

AC Milan will be looking to bolster their bid for a first Serie A title in a decade when they take on AS Roma at the San Siro on Sunday night. The Rossoneri are currently level on points at the top of the table with Napoli and are in second place just on goal difference.

Stefano Pioli’s men have won five matches on the trot in the Serie A, their latest scalp being Torino in midweek thanks to a solitary goal by Olivier Giroud. Milan are unbeaten in the league after 10 matches and have already faced Lazio, Juventus and Atalanta.

Their opponents Roma too recorded a win in midweek over Cagliari with goals from Lorenzo Pellegrini and Ibanez. The result snapped a three game winless streak which included losses to Juventus and Bodo/Glimt and a goalless draw last weekend against Milan’s title rivals Napoli.

Jose Mourinho’s side need the three points to continue occupying the last Champions League spot with their lead over Atalanta in fifth being just one point. It is a clash of titans in Italy and the result could define the season to come for either side.

AC Milan have a mini-injury crisis on their hands with several senior players ruled out. Goalkeepers Mike Maignan and Alessandro Plizzari are long-term absentees along with right-back Alessandro Florenzi who is on loan at Milan from Roma.

Antonio Mirante signs his contract until June 2022 as new AC Milan goalkeeper. He’ll be in competition with Tatarusanu after Mike Maignan injury – French GK will be out until last week of December, official statement confirms. 🔴 #ACMilan #transfers

Pioli will also be without attacking players Ante Rebic and Samu Castillejo and squad players Fode Ballo-Toure and Junior Messias.

Jose Mourinho has a near full-strength squad to choose from with Leonardo Spinazzola being the only player ruled out. Centre-back Chris Smalling could make his return after missing the last month or so due to a thigh injury.

#Roma’s Chris #Smalling out with right hamstring strain. Looked to be cramping in last match.
Bit of conflicting timeframe in article. “Up to 3 weeks” suggests Gr 1; “at least 3 wks” could = Gr 2.
Will need to see how this develops #SerieA https://t.co/hisTtwopgJ

Rafael Leao has improved in leaps and bounds over the past couple of seasons and has been integral to AC Milan’s title challenge. The winger’s energy and running is central to making the attack work with the focal point being around Zlatan Ibrahimovic.

AS Roma’s fullbacks are arguably their weakest point and Leao’s performance will be key to getting Milan the three points. The Portuguese winger has five goals and two assists to his name and will be looking to add to his tally on Sunday.

Jose Mourinho’s side have had a bad run of form but the results are perhaps a harsh representation of their performances. Their midfield partnership of Bryan Cristante and Jordan Veretout has been working well in particular and they will have to be at their best up against Frank Kessie and Ismael Bennacer.

The duo provide Roma the impetus attackingly and give the defense adequate cover. The pairing will be key if Mourinho’s side are to give Milan a tough fight.

The match is likely to be a cagey one, with Mourinho’s side looking to protect their clean sheet first. AC Milan too prefer playing more on the break and chances will be few and far between at the beginning. Milan though have extra quality and should get the three points with Roma very much a work in progress. FootTheBall predicts AC Milan 1-0 Roma.