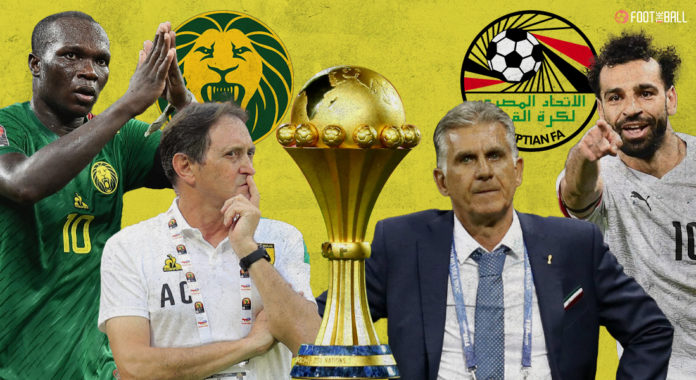 The second semi-final of the AFCON pits two favourites in the tournament in a mouthwatering clash.

Hosts and leading contenders Cameroon picked up seven points in the group-stage led by Vincent Aboubakar in fine form. They had a bit of a stutter against the shorthanded Comoros, before brushing The Gambia aside last time out.

Aboubakar (six goals, one assist) and Karl Toko Ekambi (five goals) have been the most dominant strikeforce in the tournament in search of the nation’s sixth AFCON triumph. Along with the pair of them, there is Andre-Frank Zambo Anguissa, Martin Hongla, Collins Fai and others who have really made this team a complete unit across all departments of the pitch.

Karl Toko Ekambi led Cameroon past Gambia (2:0) and into the #AFCON2021 semifinal with this standout display:

However, they have been shown to be fallible, especially in the round-of-16, and that is something their opponents will definitely keep in mind.

Egypt have not been a flashy or entertaining side so far, but they have been getting the job done expertly. After a disappointing loss to Nigeria in their opening group game, they picked up two consecutive wins to progress.

The round-of-16 tie against Ivory Coast needed penalties to separate the two sides, while Morocco took the Pharaohs to extra-time before an expertly worked goal won the tie. Egypt have only scored four goals so far in the tournament, with three of them coming in the 90 minutes. Mo Salah has been a shining light with two goals and an assist, but another period of extra-time or even penalty shootout could be on the cards.

Carlos Queiroz is aiming to take the record-winners of AFCON to an eighth continental title and this will present their sternest test yet.

Antonio Conceicao has a fully fit squad to choose from, and given the fact that there has been a good period of resting, should stick with the same lineup.

Egypt can make a few changes, notably including game winner Trezeguet from the start. Who plays in goal could be another interesting watch.

Aboubakar will be looking to continue his scoring form in the semi-final, and the captain is a formidable force. His vast wealth of experience at this level is certainly a bonus but Aboubakar looks hungrier than ever this time around. He is putting almost half of all his shots on target (48  %) along with a passing accuracy of 89%.

These two have been on fire for #TeamCameroon #AFCON2021 pic.twitter.com/nHmhdNPmdl

Though Aboubakar is not the quickest attacker around, he does get the job done as a very willing runner as shown in the recent games. He has great support around him which further makes his job easier, but Aboubakar is no slouch in linking up play himself. He can hold the ball up against defenders, as well as take shots from distance which will no doubt worry Egypt.

Vincent Aboubakar has been in fine form at #AFCON2021:

Player of the tournament? 🤔 pic.twitter.com/s7InzywSxj

Though they have the stingiest defence at the tournament with just one goal conceded in normal time so far, Aboubakar is the perfect pick to unlock schemes.

Like Cameroon, their opponents will also look to their captain for inspiration. It is no surprise that Salah is leading the light for his national team after such a hot start to the season with Liverpool.

62% – Mohamed Salah has been involved in 62% of Egypt's goals at the Africa Cup of Nations since his competition debut in 2017 (8/13), the highest ratio by a player for any nation to score at least five goals at the tournament in this time. Guide. #AFCON2021 #EGYMAR pic.twitter.com/yXhmcvLEZJ

The right-sided attacker was in superb fashion against Morocco, setting up the with a beautiful assist. Egypt always look to funnel their attacks through their right, which might make them a bit predictable but the fact that Salah can beat any defender on his day makes him such an unstoppable force. He will be looking to get in behind defenders as often as possible, taking on shots with increasing regularity.

One goal. ⚽️
One assist. 👟
One semi-final ticket punched. 🎟️

If his teammates can get some good passes into him, there is a very real chance of him scoring and with that Egypt winning.

Both teams have had a good tournament, and are vastly experienced when it comes to winning the AFCON. Cameroon have been the entertainers, exciting watch while Egypt have grinded out gritty results with time. FootTheBall predicts a 2-1 win for the hosts Cameroon.