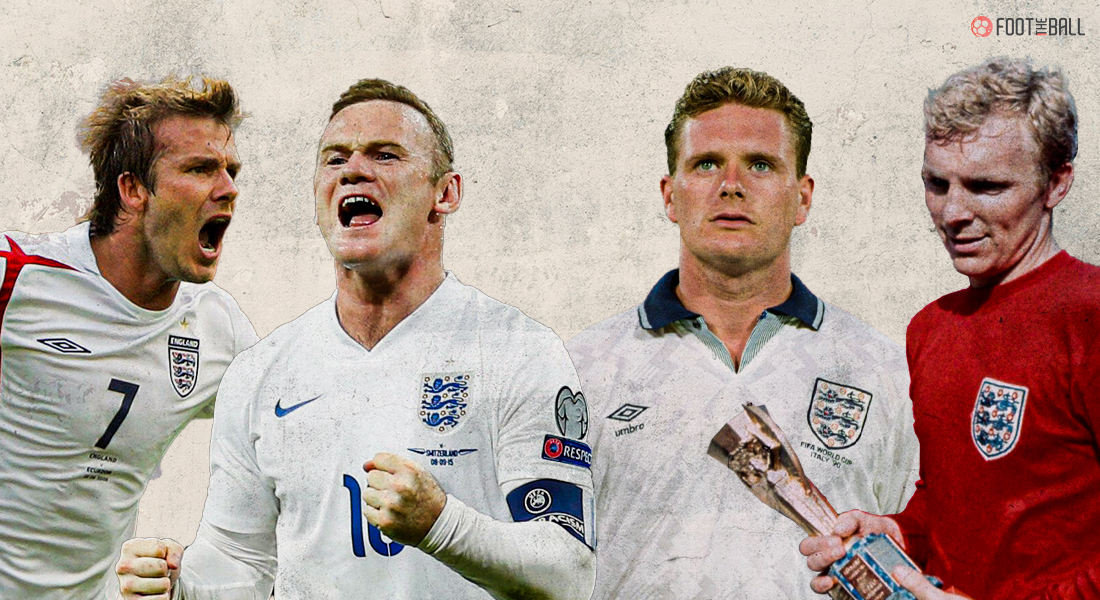 England has long been a factory for producing some of the most talented and world-class players that have graced the game. Their association with football has been for very long which made choosing this all-time XI a humongous task by all measures. FootTheBall presents the greatest England team to be assembled.

PETER SHILTON- From the era of Nottingham Forest in Europe, Shilton is renowned for his longevity at the top level which saw him earn 125 caps for his country. Physically imposing, agile reflexes and superb at handling, he would become the first choice for the Three Lions for almost 20 years.

He kept ten clean sheets at the #WorldCup – a joint-record 🧤

Having played at two European Championships and three World Cups, the last of which came when he was 40-years-old, he holds the record for most clean sheets at the finals (10). However, his most famous outing still remains being witness to Diego Maradona’s two goals at the 1986 World Cup, including the infamous “Hand of God.”

BOBBY MOORE- West Ham’s greatest ever player, and the captain of the 1966 World Cup-winning squad, Moore was one of the most feared defenders in the game. Renowned for his reading of the play and efficient distribution of the ball, Moore led the team with distinction to their only international triumph so far.

On this day in 1973 @England captain Bobby Moore won a then record 108th and final cap for the #ThreeLions.

The defender took the armband in 1964, at just 23 and he enjoyed 11 years representing #England. His greatest moment was lifting the Jules Rimet in 1966 🏴󠁧󠁢󠁥󠁮󠁧󠁿 pic.twitter.com/7EvYuzgHGr

He was made captain at just 23-years-of-age, and the defence did not concede a goal till the semi-final stage at the 1966 showpiece event. Having made more than 100 appearances with the Three Lions, Moore has been cited by Pele as the greatest defender he ever faced.

GARY NEVILLE- England’s most capped right-back (85) and a legend at Manchester United, Neville was a serial winner with the Red Devils. Being a part of the ‘Class of ’92,’ his connection with his wingers, especially national colleague David Beckham, in front made for a scintillating watch along with his tremendous work rate and leadership skills.

Our first defender is @GNev2!

The right-back won 85 caps for the #ThreeLions between 1995 and 2007, featuring at five major tournaments. pic.twitter.com/xeusTipAMO

He was part of the Three Lions setup for more than a decade, participating in three European Championships and two World Cups. Neville’s vocal presence and attention to the task at hand made him a top asset for both club and country.

JOHN TERRY- Despite his international career ending in controversial circumstances, Terry had been one of the most solid defenders for England during his time. His partnership with Sol Campbell, and later Rio Ferdinand made the team a fearsome unit at the back.

An emotional moment for soccer fans as former England and Chelsea captain John Terry announces his retirement from football. Farewell and all the best! pic.twitter.com/9dM839qf69

The former captain was Chelsea’s long-time leader, leading them to success in the league as well as in Europe. Terry’s aerial presence made him a dual threat in both the penalty boxes, while he was highly regarded for his impeccable tackling instincts too.

JACK CHARLTON- The older of the Charlton brothers, Jack was the calm and composed head in the backline for Alf Ramsey’s champions. The Leeds hero of the ‘60s and ‘70s, the defender is the club’s record appearances holder. Charlton was also a key figurehead in 1968 as England finished third at the European Championships.

🎂 Happy 85th birthday to Jack Charlton – a man beloved in two countries and respected across the world 🌍 pic.twitter.com/oyTrRvvind

Though he might have had a short career when compared to the other luminaries on the list, it is no doubt that without his partnership with Bobby Moore, the World Cup win might not have been possible for the Three Lions.

DAVID BECKHAM- Partner of Neville from 1992 and a true global superstar in his own right, Beckham made an entire generation drool over the art of free kicks. His mastery over set pieces and outstanding crossing ability made him an invaluable asset for the national team, as evidenced by his 115 caps. Furthermore, he was one of the most skilful players around and had made the right-wing his home, from where he wreaked havoc.

Starting our midfield… who else but David Beckham? 🙌

A #ThreeLions icon, he won 117 caps and was the second-most popular selection from fans in the #EnglandDreamTeam.pic.twitter.com/qSvflHuiHN

The former skipper’s controversial sending off at the 1998 World Cup began a journey of personal redemption leading to his finest hour. With qualification for the 2002 World Cup on the line against Greece, Beckham scored one of the finest free-kicks ever witnessed to book the Three Lions’ passage and reaffirm him in the good books of the country.

FRANK  LAMPARD- The highest scoring midfielder in the Premier League and for England, Lampard was another member of the ‘Golden Generation’ since the turn of the millennium. Having played 106 matches internationally, Lampard was one of the most creative talents in the squad. He was highly regarded for his visionary passing, setting up goals for his teammates and positioning in the opponents’ penalty box.

Like Beckham, he was also supremely adept from dead-ball situations. Lampard played in three World Cups, but his “no-goal” against Germany in 2010 will hurt still. His shot cannoned off the crossbar and over the line, but with neither of the linesmen seeing it, the goal was not given. That goal would have made it 2-2 and made England favourites for the win.

PAUL GASCOIGNE- One of England’s most loved superstars from the 1990s, “Gazza” was the epitome of the ‘all-round player.’ He was technically sound, had a great passing range, scored a bunch of goals, and assisted several others as well. His most famous performances came at the 1990 World Cup and the 1996 European Championships. In the former, England made it all the way to the semi-finals behind Gazza’s assists.

His reaction to picking up a yellow card in the match had become the enduring image of the finals, but the Three Lions fell to the Germans in a penalty shootout. In 1996, he scored the most famous goal of his career, which was followed by the iconic “dentist’s chair” celebration. He finished his international career with 57 caps and 10 goals.

SIR BOBBY CHARLTON- The most beloved English player of all time, Sir Bobby has been a legend for both Manchester United and England.  One of the leaders of the “Busby Babes”, the 1966 Ballon D’Or winner was the most instrumental figure as England won the World Cup. His playmaking abilities mixed with exemplary passing and shooting had seen him become both the record appearances holder and goal scorer for club and country at different points in his career.

🗓 #OnThisDay in #WorldCup history…@SirBobby Charlton scored two goals and Eusébio one as England beat Portugal 2-1 @wembleystadium in the semi-final of the 1966 FIFA World Cup. pic.twitter.com/dp2tUL01Ob

In the World Cup finals, Charlton’s brace in the semi-final knocked out Portuguese great Eusebio. During the final, it was his man-marking of German captain Franz Beckenbauer that led to England asserting themselves in the game, which they would win in extra-time.

GARY LINEKER- England’s third-highest goal scorer, the lifelong Leicester City fan was one of the most predatory and lethal finishers in the game. Winner of three Golden Boots in the old First Division, Lineker was an even more potent force when it came to the international scene.

#OnThisDay in 1992, @GaryLineker scored against CIS in a 2-2 friendly draw ⚽️

His 48th goal for 🏴󠁧󠁢󠁥󠁮󠁧󠁿@England would prove to be the 1986 #WorldCup Golden Boot winner's last for his country 😢 pic.twitter.com/wnmEgqloJS

His 48 goals from just 80 appearances is one of the best goal-scoring ratios in modern-day football and holds the record for the most goals at World Cups by an Englishman. He won the World Cup Golden Boot in 1986 with six strikes before again playing a crucial part in the Three Lions’ run to the semi-final four years later.

WAYNE ROONEY- The prodigious teenager who made his debut at 17-years-old. Since then, his career has been nothing short of brilliant winning everything on offer with Manchester United. The current Derby County boss is the Three Lions’ all-time top scorer with 53 goals amassed over 120 caps, and was yet another fixture of the aforementioned ‘Golden Generation.’

Bursting onto the scene at Euro 2004, his four goals at the tournament made him an instant hit. He was known for his versatility across the frontline, along with his stamina and determination to make things happen always on the pitch. “Wazza” appeared in three World Cups over his storied career.