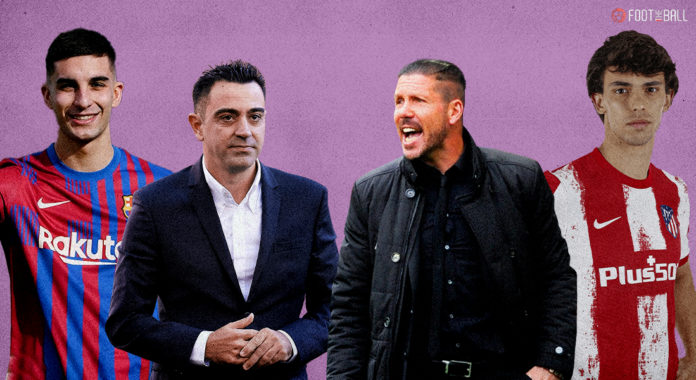 One-time championship rivals, Barcelona and Atletico Madrid are set to meet at Camp Nou on Sunday. In an anti-climactic backdrop, the game will be a fight to gain an upper hand in deciding who gets the fourth and final UCL spot. This sums up how the mighty have fallen this season. Regardless, games between these two sides are always nervy and cagey affairs. With so much on the line in this one, expect more of the same.

The fixtures resume after a two-week break, which means that the form book goes out of the window. However, Barcelona will come into this one on the back of a good transfer window. The Catalans completed the signing of the likes of Adama Traore and Aubameyang, adding much-needed firepower to a dull attack before.

Atletico won their last game in La Liga 3-2 against Valencia, but their form this season has been concerning. Usual defensive stalwarts have conceded 26 goals in 21 games.

With Barcelona hot on Atletico’s heels, just one point behind in 5th, the winner of this match could go a long way to deciding who gets the final, financially lucrative, UCL spot.

Xavi hasn’t had good luck with injuries during his tenure so far which looks like a trend that will continue. Long-term absentees include industrious midfielder Sergi Roberto, wonderkid Ansu Fati and Samuel Umtiti. They’ll be joined on the sidelines by Eric Garcia, Memphis Depay and Clement Lenglet, who suffered a hamstring injury recently.

Test conducted on Clément Lenglet this morning has revealed an injury to the femoral biceps in his left hamstring, meaning that he is unavailable until the injury clears. pic.twitter.com/1a7UxiP1VQ

Relief comes in the form of new signings. Adama Traore and Aubameyang are both expected to make their debuts. The adrenaline of debuts should make this contest an interesting watch.

Atletico Madrid are expected to hand a debut of their own. Multi-positional player Daniel Wass was poached from Valencia in the winter transfer window. He could be in line for his first appearance for the club.

On the injury front, there is a lack of clarity on the availability of various players. Luis Suarez looks unlikely to be involved against his former club after his excursions with Uruguay. Key players like Griezmann, Kondogbia and Llorente all face questions marks and would be expected to be on the bench in the best-case scenario.

Electric winger Adama Traore completed his homecoming in the bygone transfer window and is expected to make his debut this game. Los Cules have not had a player as unique as Adama has become in a long time. His ability to do the unexpected and turn something from nothing adds a unique dimension to Barcelona’s attack, especially in the absence of Fati and Dembele.

Combining the above facts with Atletico Madrid’s uncertainty at the LB position, which no player has been able to make his own, Adama could be set for an encouraging homecoming game.

Atletico Madrid will look towards the most expensive signing in their club’s history for inspiration. Joao Felix has struggled to take the step to superstardom since completing his $142 million move to the club three years ago. Having shown his tantalizing potential in bits and pieces, Atletico need him now to ascend another level. In the absence of Luis Suarez, he’s expected to lead the line with Angel Correa.

Felix’s movement and trickery will be crucial to bypassing the defensive triumvirate of Pique, Araujo and Busquets, as Barcelona’s fullbacks have the license to get forward in Xavi’s progressive system.

While both teams have had stuttering campaigns so far, the inherent quality of both, plus the excitement of multiple debuts has given this game an exciting feel.

These two teams are evenly matched on paper and encounters between them are almost never goal fests. Expect more of the same, especially with UCL qualifications hanging delicately in between. Expect Barcelona to make their home advantage count and kickstart Xavi’s tenure with a narrow win against the team from Madrid. FootTheBall predicts Barcelona 2-1 Atletico Madrid