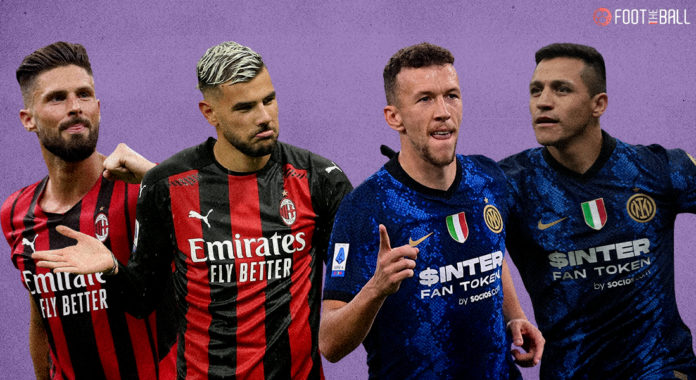 An Olivier Giroud double gave Stefano Pioli’s AC Milan the win against fierce rivals Inter as they closed the gap at the top of the Serie A to just one point. Simone Inzaghi’s Inter took the lead through Ivan Perisic but a strong second half from Milan saw them grab the three points.

The match got off to a tentative start with both sides jockeying for possession and position with Milan coming out of the blocks slightly quicker. It was Inter who had the ball in the net  after 10 minutes although their joy was short lived as the flag went up after Denzel Dumfries headed in a great Perisic cross at the back post.

The Nerazzurri nearly went ahead again when Marcelo Brozovic’s shot deflected off Pierre Kalulu but Mike Maignan reacted well to get a hand to it. Milan played well in midfield but their lack of physicality left them exposed repeatedly.

Maignan was again on hand to keep the scores level with Dumfries again threatening from the right wing-back position. Lautaro Martinez played the Dutch full back in smartly whose volley was smothered well by the goalkeeper.

⏱️ 28'
What. A. Save! @mmseize produces another absolutely stunning stop to deny Dumfries! 🚧#InterMilan 0-0 #SempreMilan

Pioli’s men responded, calling Samir Handanovic into action as Rafael Leao set up a Sandro Tonali shot from distance but the Inter keeper tipped it away from the top corner. The rebound from Leao was deflected wide.

Inter jolted into action and took the lead, the other wing-back Perisic getting on the end of a Hakan Calhanoglu corner in what could be his last Milan derby. Perisic and Dumfries were causing problems to the Milan backline and it was fitting that one of them opened the scoring.

⏱️ The Nerazzurri are ahead in the #DerbyMilano at the break! 💪#InterMilan 1⃣-0⃣
39 – ⚽️ #Perisic

The Rossoneri tried to build pressure but were unable to create anything of note and Inter went into the break a goal up.

The second half was much more open with Milan pushing for the equaliser and Inter looking to extend their lead on the counter attack. Pioli sent on Junior Messias to turn the tide around and the youngster looked bright during his time on the field.

Tonali tested Handanovic again but it looked for a while that the two sides will cancel each other out. Inzaghi sent on Alexis Sanchez to provide some experience but the Chilean was the culprit 15 minutes from time, giving away the ball in midfield which allowed Milan to grab the equaliser.

Giroud dispossessed Sanchez and the ball was picked up by Tonali who played in Brahim Diaz. The former Man City youngster’s shot was deflected but fell into the path of Giroud who slid the ball in at the back post.

And the Frenchman was not done there. Davide Calabria slid a pass into the box to the striker who had Stefan de Vrij tight on him. Giroud though produced a moment of brilliance, flicking and turning sharply to leave the Inter defender clueless before curling a low shot that Handanovic got a hand to but could not keep out.

Milan then showed more maturity than their counterparts to hold on to the lead despite a very late red card shown to Theo Hernandez for a cynical foul. A breathless derby ended with the red and black half of Milan celebrating. Here are our key takeaways from the match –

Inter have looked imperious in recent weeks but this derby and next weekend’s match at Napoli were key in the battle for the Serie A. The loss meant that Inter only have one point over Milan albeit with a game in hand.

Napoli could leapfrog Milan on goal difference if they win at Venezia tomorrow which would set up a very tasty clash at the Diego Maradona Stadium in Naples. After the processionally title win of last season, it looks like the Italian league will go down to the wire.

Olivier Giroud has made a career of being the facilitatory forward who does not have a thirst for the spotlight but Saturday evening was his time to shine. He had a quiet first half and was barely involved in the second but for the five minutes that decided the game.

For the first goal he showed his predatory instincts and for the second he showed his sheer technical quality and decided the game near single-handedly. Giroud’s time at San Siro has been mixed so far but this performance will no doubt endear him to the Milan faithful.

THE GOALKEEPERS DECIDE THE GAME

The nature of goalkeeping means that it is not usually a position where you can win a match from, but you can definitely lose it. And that is what happened in the derby with the difference in goalkeeping on the night proving to be the difference.

📸 – Dumfries with a HUGE chance but Maignan with another great save! pic.twitter.com/SZkkBb1nV2

Mike Maignan was outstanding, keeping Milan in the game with several good stops before commanding his box with exceptional authority as they defended their lead. Samir Handanovic on the other hand must be ruing the winner, a shot that he would routinely save in practice.

In a low-scoring game like football, the minor things decide matches. In this case, they may just decide the title.