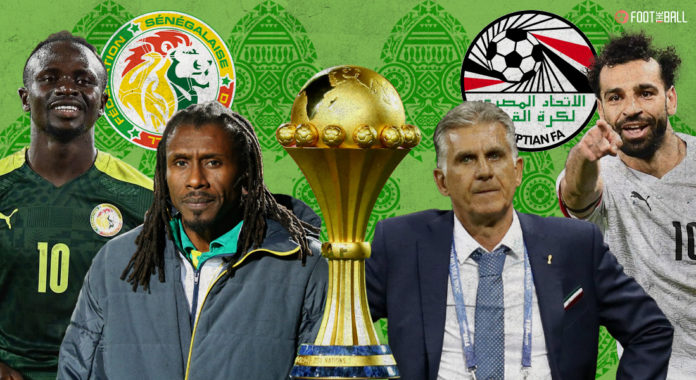 The prestigious AFCON 2022 tournament is drawing to a close as Senegal take on Egypt in a much awaited final. This match will see Liverpool teammates Sadio Mane and Mohammed Salah battle it out for the crown of Africa.

Senegal have been unbeaten in the tournament so far. They won one game and drew two in the group stages, since then they have looked like the strongest team at the tournament. They have scored 8 and conceded 2 in knockout stages enroute to the final.

Aliou Cisse’s team looks formidable and he will know all about the obvious threat of Mo Salah that Egypt possesses. Senegal would be desperate for a win in the final to boost their confidence ahead of the Qatar World Cup 2022. The Senegal national football team plays on the front foot.

They also arguably have the most complete team at the tournament, with stars from a lot of top 5 European leagues such as Idrissa Gueye, Kalidou Koulibaly, Namplys Mendy and Ismaila Sarr to name a few. Sadio Mane led Senegal are the favourites to lift  the AFCON cup going to the final something a Salah led Egypt would be vary of.

Egypt have been unspectacular throughout the tournament. They qualified 2nd in their group. They won two and lost one during the group stages. Their road to the final has been somewhat rocky. Except for the quarter final win against Morocco, Egypt have struggled to finish off games during the 90 minutes.

Carlos Queiroz would be hoping his team can forget about their inconsistent performances throughout the tournament and overcome the star studded Senegal side in the final.

Despite having the likes of Salah in their team the Pharaohs have been a threat mainly on set pieces.  Egypt would also hope Queiroz’s defensive tactics payout and they are able to not concede in normal time specially against a lethal Senegal attack.

Both Senegal and Egypt have been very lucky with injuries throughout the AFCON 2022. Aliou Cisse and Carlos Queiroz do not have to make major alterations to their tactics or team shape for the final.

With none of the first team options missing for either of the teams, expect both managers to deploy their strongest elevens.

The game changers for the AFCON final have got to be partners in crime at Liverpool, Sadio Mane and Mo Salah. Mane has enjoyed an exceptional tournament, scoring thrice and assisting twice in six games. He was decisive in the semi-final against Burkina Faso and will be looking to continue his good form against Egypt.

Mo Salah has been much quieter with just two goals and one assist to his name in the competition. He remains one of the best players in the world and his sheer technical quality and ruthless finishing is definitely something Senegal need to watch out for.

The two wide forwards have been messrs-in-chief for years at Anfield and it will be an intense encounter seeing them go head to head at one of the biggest stages in the world.

Egypt have the most AFCON competitions to their name with seven triumphs and are definitely used to being on the big stage. However, their last win came in 2010 and they have only managed one runners up spot in 2017 since. Senegal have never won the tournament and this is one of their best chances at it. FootTheBall predicts the latter will win out with the game ending Senegal 2-1 Egypt, after extra time.