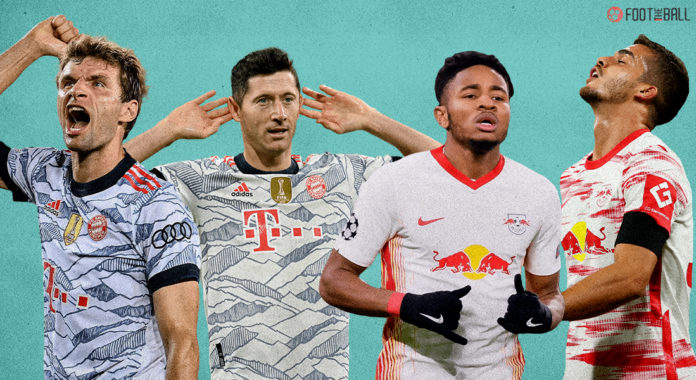 Bayern Munich went nine points clear in Bundesliga as they defeated RB Leipzig 3-2 at the Allianz Arena. Thomas Muller Robert Lewandowski were on strike for Bayern with an own goal from Josko Gvardiol adding to their tally. For the visitors, it was Andre Silva and Christopher Nkunku who were on the scoresheet.

Leipzig, who are still to win a game at the Allianz Arena, fought bravely, but in the end, Bayern did just enough to eke out all the three points.

A frantic first half

It was Bayern who opened the scoring through Muller in the 12th minute. Josko Gvardiol lost possession of the ball which ultimately found it way to Lewandowski whose shot was parried away by Peter Gulacsi to an unmarked Muller who happily slotted the ball into the back of the net.

The goal jolted the visitor into life as Nkunku tested Manuel Neuer who produced two good saves to keep his team in the lead.

The visitors were eventually rewarded with a goal of their own. Corentin Tolisso, who was not having the best of games, lost possession much like Gvardiol did for the opener. Newuer rushed out to meet the challenge but Konrad Laimer chipped the ball which was going wide before Andre Silva slotted in between two Bayern defenders to score.

If the first goal had jolted Leipzig into life, the equaliser did the same for Bayern as they stepped up the pressure to look for the second goal. Muller drew a save from Gulacsi, and Coman was highly unlucky to hit the post. Muller then had the Bavarians in the lead before VAR chalked off the goal for a foul.

It didn’t deter Bayern, who ultimately got back into the lead through Lewandowski.

Leipzig’s defence gave free space to Coman on the left win, who launched a pinpoint cross into the box, headed past the Polish striker’s goalkeeper.

Bayern see it out in the second half

The second half saw a recharged Leipzig who began pressuring Bayern’s midfield and defence high up on the pitch, And it paid off as Laimer conjured a brilliant pass between Niklas Sule and Benjamin Pavard which was latched onto by Nkunku who put the ball past Neuer’s legs.

The trend of the conceding team playing immediately better continued as Bayern restored their lead within minutes.

Coman found Serge Ganbry on the far right side. The German’s cross into the box deflected off Gvardiol and went past a hapless Gulasci.

Whipped up something special ♨️

With less than half an hour to play, Tadesco sent in Emil Forsberg and Amadou Haidara.

The latter stages saw both temas get chances to add further goals to their tally. Gnabry and Lewadnowski came close while Forsberg had two chznces in a single minutes but the goal never seemed to come and Bayern saw out the rest of the match.