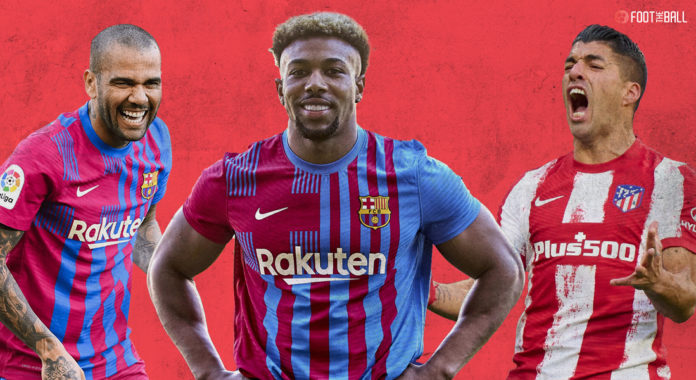 Two age old rivals clash at the Camp Nou. Barcelona trail Atletico by a position and a point on the league table, meaning three points will be crucial for either side.

Los Rojiblancos started the brighter of the two, taking the lead within 10 minutes. A fast move through the middle released Luis Suarez down the right whose first time cross was dispatched clinically by Yannick Carrasco.

The response came immediately from Barcelona. Dani Alves’ lofted cross from the right side was met superbly by Jordi Alba on the volley to level brilliantly from the edge of the box. Then it was the Blaugrana who took the lead. Adama Traore, already causing problems on the right, zipped past Mario Hermoso before standing a cross up for Gavi to head home. Atletico were rocked, trying to muster a response but Joao Felix’s scuffed volley was easily stopped.

Just before halftime, the Blaugrana doubled the lead. Alves’ free-kick was headed on to the crossbar by Gerard Pique. The rebound fell to Ferran Torres who slipped but following up was Ronald Araujo who made no mistake and finished past Jan Oblak at his near post. Diego Simeone really needed to rally his troops at the break if the visitors were to take points from this match.

Barcelona picked up from where they left off, scoring withing minutes of the restart. A simple cross from the left by Gavi was allowed to run all across the box as everyone missed it. Alves came running on it and placed his effort past the outstretched Oblak to give a commanding three goal lead. Simeone reacted by making a triple change, adding to the one he had already made at halftime as the game neared the hour mark, which seemed to stir something.

A corner from the right was headed up by Jose Gimenez which found an unmarked Suarez to score against his former club. There were some clamours for an offside but Ferran Torres had played the Uruguayan onside as the lead was cut to two goals. With Atletico gaining a stronger foothold, Alves’ afternoon took a turn for the worse. The Brazilian caught the calf of Carrasco in a dangerous studs-up challenge from behind, leading the referee to consult the pitchside monitor and show him a straight red card.

Things on the sidelines were heating up too, with Xavi’s assistant seeing the second red card of the match as the game entered the final 10 minutes. That was followed by a yellow for the manager himself as every decision of the referee on the pitch was under the spotlight. The match dwindled down without too much action happening at the fag end as Barcelona held on for an important three points.

It has been an up and down season so far for the Catalans and indeed their past frailties showed up instantly as they conceded early. However, from then on, it was a rampage with three goals on the trot in the first half itself. They cut through the Atletico defence at will, from setpieces and crosses. It got even better at the start of the second half, with their fourth goal of the afternoon.

Nevertheless, they started to take their foot off the gas a little bit, allowing Suarez to sneak in a goal. Alves’ sending off complicated matters immensely as they rarely had long spells of possession after that. Their defence held firm and managed to see the win through.

It was the dream start but soon turned into a nightmare. Carrasco’s goal was a smart snap finish, bu the backline rarely looked assured. It has been a major problem for Simeone this season, the frequency of goals they have been conceding. Three goals in 35 minutes would hardly help with some drastic changes needed.

3 – Atlético de Madrid have conceded 3+ goals in the first half for the first time since January 2015, precisely against @FCBarcelona in the Spanish Copa del Rey (2-3 win at Vicente Calderón). Roller. pic.twitter.com/MD5NeJPQoP

Before those can be made, however, Barcelona extended their advantage further in the second half. Having a man more than their opponents in the closing stages of the game certainly helped them see a lot more of the ball but Barcelona’s defence held firm.

Catalans into the top-4

They have finally done it. 22 games into the season, Barcelona have managed to break into the Champions League qualification places. No doubt they will need to do a lot more to keep their place come the end of the season but the additions in the transfer window have certainly helped matters.