Two favourites against each other! 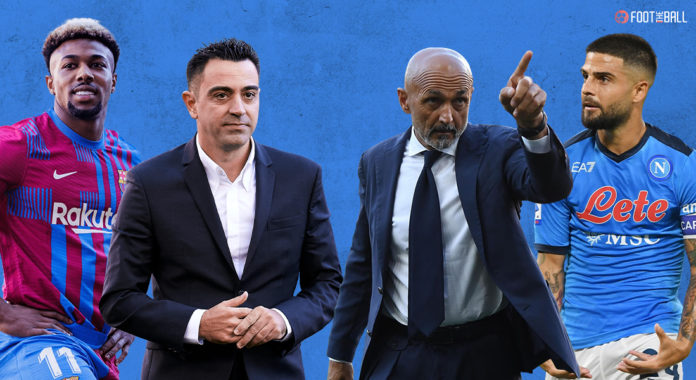 European nights are back with one of the more important ties coming in the Europa League round-of-32 between a fallen giant and rising power.

It has been almost two decades since Barcelona were last in this competition at this stage. Three losses and a draw saw them crash out of the UEFA Champions League, but results have picked up since under new management. An exhilarating 4-2 win over Atletico Madrid helped propel them back into the top four. However, their most recent match, a 2-2 draw against Espanyol, had some familiar failings which need addressing in Europe.

Adama Traore has hit the ground running while Ferran Torres and Pierre-Emerick Aubameyang look to be solid additions. The youngsters have continued performing beyond their age and Luuk de Jong is finally living up to his job as a goal scorer. All of these things hold the side in good stead, if the defence can hold firm.

Napoli are right in the mix of the Serie A title race, sitting just two points behind league leaders AC Milan. They are undefeated in their last four matches, securing a valuable point against defending champions Inter this past weekend. Their defence is the most stringent in Italy, while their frontline netted 15 times in the Europa League group stages.

Victor Osimhen and Lorenzo Insigne are two of the deadliest strikers and will have more than able support from a hardworking yet supremely talented midfield. Having topped their group, the Partenopei will look to add another big scalp this season as they are one of the favourites to go all the way in the competition this time.

Xavi will be sweating on the fitness of his best defender Ronald Araujo and it will take a late call to decide on his participation. Memphis Depay is likely to completely miss out through injury.

Hirving Lozano, Matteo Politano and Stanislav Lobotka are the absentees for the visitors, depriving Luciano Spalletti of some major width power.

Given how well Napoli defend, it should be no surprise that a creative playmaker can be the difference for the Catalans. Pedri has slowly been getting back to his best form and will have a big task of unlocking his opponents on the night. He averages 6.41 progressive carries and 26.93 pressures per 90, which highlights his importance in the attacking side of things.

Pedri is not a regular goal scorer of course, but the way he links up play and threads the difficult passes can be key to breaking the defensive lines of Napoli. Furthermore, he can also find the net as he showed by scoring twice in his last games.

Having missed the AFCON due to a face injury, Osimhen will be keen to finish the second half of the season on a high. Six goals this season in the league may not be his best yet but his performances have been getting back on track in recent times. He has been involved in 3.15 shot-creating actions P90 with 6.78 touches P90 in the opponent’s penalty area, which just goes to show how involved he is in attacks.

Osimhen’s towering presence in the box is also a threat through crosses as Napoli have Lorenzo Insigne and Dries Mertens. He can definitely get the better of Eric Garcia if he plays and Osimhen’s quickness can be the difference on the ground. If he can set up transitions and hold the ball up, Napoli can have a good few shooting chances.

This is one of the more tougher fixtures to call this week, with both of them being contenders for the eventual crown. FootTheBall predicts a 1-1 draw between the two sides on Thursday.