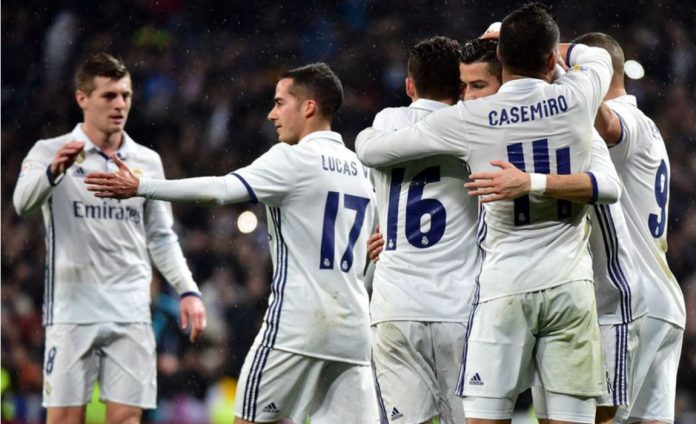 Barcelona and Real Madrid maintained their head-to head at the top of the Liga Santander on Saturday with both sides claiming important wins, all be it in different style.

Barcelona had to endure a tough first 45 minutes in their local derby away to Espanyol, but took the lead five minutes after the break when Luis Suarez latched onto a loose backpass to score his first goal in 6 games.

Ivan Rakitic doubled Barca’s lead after great work from Leo Messi in the 76th minute and Suarez’s second of the game, which came three minutes from time, sealed the win that keeps Barca top of the table all be it with one game more than their title rivals.

In contrast to Barca, Real Madrid made hard work of Valencia in a rainy Santiago Bernabeu Stadium, but ran out 2-1 winners after Dani Parejo had given them a late scare.

A 27th minute Cristiano Ronaldo header put Madrid ahead and he should have sealed the win with a 54th minute penalty, which was well saved by penalty stopped supreme, Dani Alves.

However when Parejo scored a direct free kick with eight minutes remaining, it looked as if Madrid could drop two vital points in the title race, only for Marcelo to produce a low right foot shot three minutes later to ensure the points stayed at home.

Atletico Madrid got off to the perfect start away to Las Palmas as two Kevin Gameiro goals and a powerful header from Saul Niguez put them 3-0 ahead after just 18 minutes.

Things got worse for Las Palmas when Kevin Prince Boeteng on the hour to leave them with 10 men and further goals from Thomas Partey and Fernando Torres sealed the 5-0 rout in the closing minutes.

Elsewhere Real Sociedad maintained their hopes of playing in Europe thanks to goals from Carlos Vela and Juanmi, which gave them a 2-1 win at home to Granada. The result means Granada join Osasuna in being relegated to the second division for next season and they look likely to be joined by Sporting Gijon, who were beaten 3-1 in Villarreal on Friday.