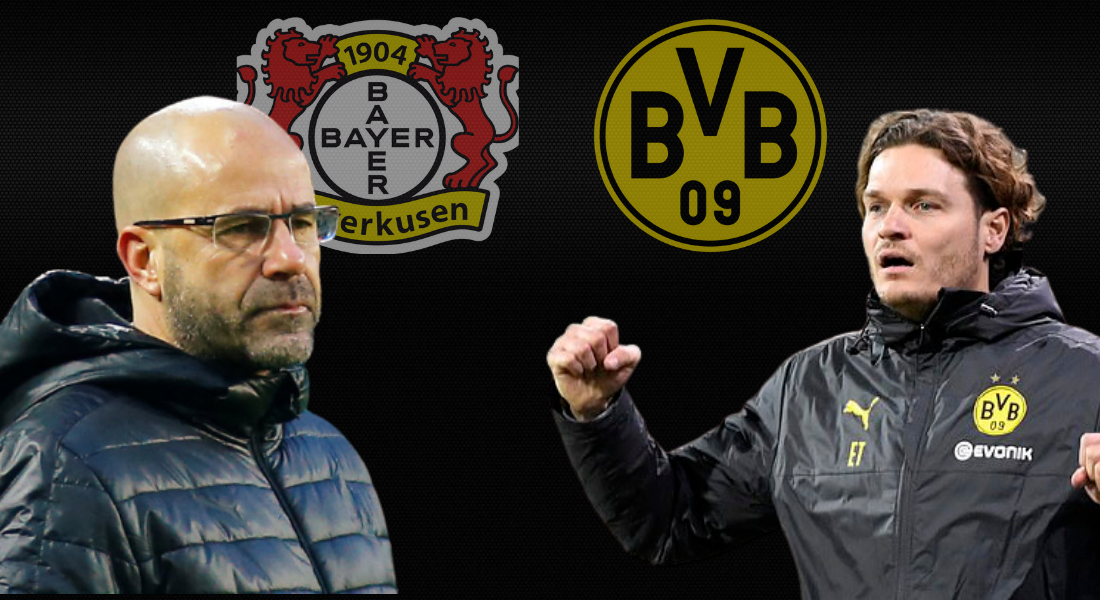 Bayer Leverkusen and Dortmund sit on 3rd and 4th place respectively , with Leverkusen only ahead on goal difference with both teams sitting on 29 points each.

Bayern Munich sit at the top of the table and despite a few stumbles recently, most notably against Borussia Monchengladbach, still look formidable. Historically, in the latter half of the season Bayern more than usually do go on a run, and this time they will be looking to extend the gap between them and the chasing pack. Thus the clash between Leverkusen and Dortmund late on Tuseday  might prove decisive , as to who secures the champions league spots in the Bundesliga.

Here's where things stand as we head into our first 'Englische Woche' of the year 📸#BLMatchday pic.twitter.com/8cW7qVbA9j

Leverkusen under Peter Bosz, just missed out on a champions league spot last season, and his team did seem eager to remedy at the start of this season as they won the first 12 games of the domestic season on the trott. Leverkusen’s form although has taken a massive dip over five previous game weeks, where they have won two; lost three and drawn one game. One of the losses was the most recent fixture where they lost 1-0 to Union Berlin. Leverkusen will be looking to put a stop to their abysmal form , where they have only picked up a singular point from their last three games. Another important factor of this form has been the inclusion of Patrik Schick,in place of their top goalscorer Lucas Alario. Schick has not been productive at all for Leverkusen this season and he surely would not play a major role in this game.Bosz will also be wary of the attacking talent that is this disposal of his former club.

🗣️ Peter Bosz: "I am satisfied. In the early stages you could see that the confidence wasn't there, but I must give the team a big compliment for turning the game around and showing that we wanted to win."#B04SGE | 4-1 | #DFBPokal pic.twitter.com/jvLRnwCgI8

Borussia Dortmund on the flipside have dropped points throughout the season against weaker opposition in the league. The pressure of this inconsistent form, culminated in Lucien Favre being sacked after his Dortmund side was thrashed by newly promoted Stuttgart 5-1 at home. His assistant Edin Terzic stepped in as interim head coach after Favre got  the sack and his team’s form has not drastically improved as in their last five matches they have three wins; two losses and one draw which was in the previous game against Mainz who sit bottom of the league currently. But that has been Terzic’s only loss since taking over and he will be looking to rely on the likes of Sancho and Haaland, to make sure his stock rises even further . Under the new boss Sancho seems to be approaching his best. Terzic , who’s got him producing some of the world class performances he was showcasing last season, should be very pleased with the effect he’s having on his star man’s performances.

Leverkusen have had their injury woes this season, with the likes of Karim Bellarabi, Mitchell Weiser, Sven Bender, Ezequiel Palácios,Santiago Arias and Paulinho all out with major injuries and their return dates have not been confirmed. Florian Wirtz , who has been a shining light since Havertz’z departure is also doubtful for the clash against Dortmund. New Signing Timothy Fosu-Mensah, has also pulled out of the game due to some personal reasons. Due to this Leverkusen are really depleted in the wide areas and could face some major obstacles as Dortmund have mercurial wide men. Leverkusen will look to line up in a 4-3-3 or a 4-2-3-1, with a slightly less dynamic midfield than usual. Leverkusen’s most probable line up will be- Hardecky,L. Bender,Tah,Tapsoba,Sinkgraven,Amiri, Baumgartlinger,Demirbay,Diaby,Alario and Bailey.

Dortmund do have a few missing due to injury such as Witsel, Thorgan Hazard and Shemelzer,  luckily out of which only Witsel is a guaranteed starter ,and they have the versatile Can, who  would fit seamlessly into his role in midfield. Terzic will most likely look to deploy a 4-2-3-1. BVB’s most probable line up for the game against leverkusen will be- Burki, Meunier,Akanji, Hummels,Guerreiro, Can, Delaney, Sancho, Reus,Reyna and Haaland.

Leverkusen will surely miss Florian Wirtz if he does not play, as he has been a force to be reckoned with in this team. The front three of Leverkusen, might prove decisive against Dortmund.  Lucas Alario has been the main man for Leverkusen this season. Alario has scored 8 times in 13 matches , and Leverkusen will look to him to put his chances away and lead from the front. Thomas Meunier, who has struggled defensively this season , is in for a torrid time against the extremely pacey and trickey Diaby and Bailey who will look to cause havoc in the attacking third flanking the lethal Alario on either side.

Haaland will surely have a lot of eyes on him as always, but other Dortmund stars specially Sancho will surely look to continue the uptick in his performances. Sancho’s performances have taken a massive lead forward after Terzic got appointed, it seemed like the England international was having a hard time concentrating under Favre this season. Favre himself was not completely confident about the conviction Sancho was showing throughout the season often dropping him for other players, but under Terzic after an extended run in the first team ,Sancho is seemingly back to his best and has scored twice in the last three games. In defence BVB have some star performers too, Hummels who has been nothing short of exceptional this season and  Raphaël Guerreiro, who has arguably been one of the best full backs in Europe over the last two seasons.

The tackle, the passing, the dribble, the cross, the finish 👏

This goal was a work of art 🎨 pic.twitter.com/2Gc0LPKuAB

This is bound to be an exciting match with both teams possessing frightening pace on the wings and in transition. Although Leverkusen and Dortmund will set up in a very similar fashion , current form suggests that Dortmund will have the edge over Leverkusen in this game which is set to take place at the BayArena. Fans of the German top flight can surely be excited to see this tactical battle take place and see which coach’s tweaks work better.

We at FootTheBall predict a close game with not a lot of goals but a lot of shots, and will most likely end 2-1, in Dortmund’s favour. Let’s see which German team can give a better account of themselves and cement their position in the Champions league spots.