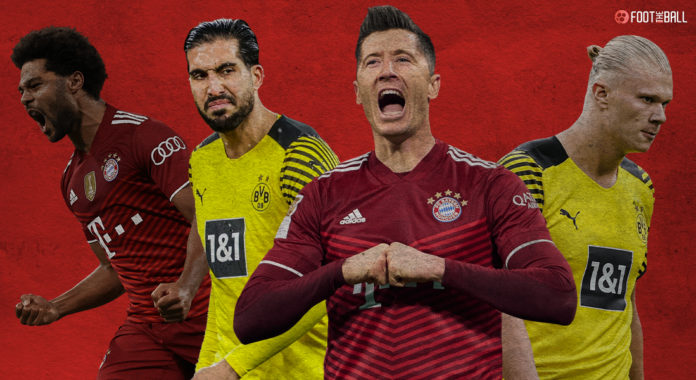 Bayern Munich won their 10th consecutive Bundesliga title with a commanding 3-1 win over Borussia Dortmund on Saturday evening. Julian Nagelsmann’s side blew Dortmund away in the first half before a professional display in the second saw them put the title beyond their opponents’ reach mathematically.

It took the home side very little time to settle into their rhythm as they dominated the match straight from kickoff. Joshua Kimmich and Leon Goretzka took control of the midfield and Bayern looked to carve open a flimsy Dortmund defence.

They did not have to wait long with Serge Gnabry getting the opener in the 15th minute with a stunning strike. Goretzka headed down Kimmich’s corner to the winger at the edge of the box. Gnabry took one touch with his thigh before volleying the ball through the crowd into the back of the net.

There was a distinct sense of unease about Dortmund who struggled to cope with Bayern’s high press. Gnabry and Kingsley Coman made good runs and played in some dangerous crosses but the end product was a little bit poor. At the other end, Erling Haaland did not get a sniff until the 27th minute when he snapped a shot wide under pressure.

Gnabry had the ball in the net again soon after but the goal was ruled out for a tight offside on Coman in the buildup. Dortmund were let off at that instance but they did not make good use of their second chance. Five minutes later, Dan-Axel Zagadou gave the ball away in a dangerous position, allowing Thomas Muller to play in Robert Lewandowski. The Pole made no mistake, finishing through Marvin Hitz’s legs for 2-0.

Frustration seemed to be getting the better of Dortmund as Emre Can and manager Marco Rose received yellows after a little spat in the 40th minute. Goretzka and Lewandowski had half chances but were unable to trouble the score further by half time.

Dortmund came out in the second half with a much more positive outlook and they had their reward within five minutes. Kimmich clumsily slid in on Marco Reus and the referee had no hesitation in pointing to the spot. Despite more esteemed attackers in the away side’s ranks it was Can who stepped up and scored to get Dortmund back into the game.

The Black and Yellow nearly equalised a couple of minutes later. Muller gave the ball away to Haaland who played in Reus. The Dortmund captain though was denied by his counterpart in Manuel Neuer from a narrow angle. The same combination again worked and Reus lined up a shot to equalise but Lucas Hernandez slid in to make a crucial last-ditch block.

Bayern were suddenly under pressure but they responded well with Lewandowski firing wide after some decent buildup play. The away side remained in the ascendancy and Jude Bellingham had a penalty shout turned down after turning Benjamin Paavard inside out. Replays showed that the Frenchman got just enough of the ball.

The game opened up completely as Bayern had a penalty shout of their own turned down. Coman then played in Lewandowski but the Pole opted to pass rather than shoot but the Dortmund defence was active enough to clear it away. Nagelsmann’s side retook control with Muller growing in influence.

Hitz made a crucial save in the 70th minute after Muller’s shot was deflected into the path of Lewandowski to keep Dortmund in the game. And Dortmund did manage to create some chances in the next few minutes. Haaland had two decent chances but both his attempts went narrowly wide.

Bayern would not be nine-time consecutive champions if not for their ruthlessness and they showed it once again after Haaland’s misses. There was chaos in the Dortmund box and the ball pinballed to substitute Jamal Musiala. The youngster took a touch and before volleying in emphatically to secure the win and title for Bayern Munich.

Robert Lewandowski has arguably been the most lethal player in world football over the last three seasons and he showed his class again on Saturday. The striker got one goal and showcased his overall play as Bayern gave Dortmund a lesson in attacking.

There have been rumours of a move to Barcelona for Lewandowski and if he does decide to leave, he goes as the top scorer once more. His legacy in the Bundesliga will be right up there with that of Gerd Muller.

Bayern’s disappointments in the cup and Europe this season have exposed that they need to improve to come back into Europe’s absolute elite but the game against Dortmund gave hope to Nagelsmann. Coman and Gnabry were excellent while Kimmich and Goretzka is one of the best midfield pairings in Europe.

Lucas Hernandez showed that his best position is at the heart of defence alongside Upamecano. Bayern’s next step is to effectively replace their core of Neuer, Lewandowski & Muller to bring in their next great team.

It was a season of transition for Bayern Munich as they welcomed a new manager to the dugout and their performance level was much lower than their usual standard. They gave the challengers many opportunities to mount a title charge but Dortmund and co. missed a big chance in breaking Bayern’s hot streak of titles.

Dortmund’s performance on the night was representative of their season – key players missing due to injuries, inconsistently brilliant, and not taking advantage of openings. As Nagelsmann inculcates his ideas into this Bayern side, one can only expect them to get better. Combined with the expected departure of Erling Haalandand, there is no end in sight to their dominance in Germany.