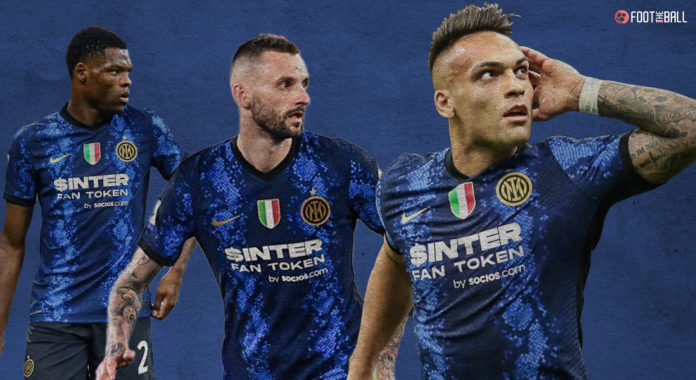 While the Liverpool-Man City title race may be hogging the limelight, the Serie A Scudetto fight got intense on Saturday. Defending champions Inter produced a scintillating performance to defeat AS Roma 3-1 at the San Siro. This win moved them one point above AC Milan, who have a game in hand.

Denzel Dumfries, Marcelo Brozović, and Lautaro Martinez were on target for the hosts, while Henrikh Mkhitaryan scored for the visitors.

For Inter, it was their champion mentality that was on display. After an insipid opening 15 minutes, the game suddenly sprang to life with Hakan Calhanoglu testing the goalkeeper from range. In reply, Henrikh Mkhitaryan just fired past the post. And the visitors could have had the lead in the 29th minute. Roma won a free kick on the right edge of the penalty area. Lorenzo Pellegrini swung a beautiful freekick which was somehow headed over by Gianluca Mancini.

And it was on the next attack that Inter found the goal. Hakan Calhanoglu’s brilliant through ball was latched onto by Denzel Dumfries, who conjured up a clever finish past a hapless Rui Patrício.

The goal seemed to have shot Inter with confidence as they began to dominate Roma. Mancini earned a yellow as Roma struggled to keep up with the pace.

And after a corner and a couple of chances, Inter doubled their lead in some style.

Marcelo Brozovic started and finished the attack as he struck the ball into the top right corner that is surely will be among the contenders for the goals of the season.

Dumfries could have had one more goal but failed to properly connect his head to a Federico Dimarco cross.

Roma’s chance of recovering from the first-half onslaught were laid to rest within minutes of the second half.

Roma’s entire defence went to sleep from a corner as an unmarked Lautaro Martinez headed the ball into the net.

The second half was more about game management as Inter produced some chances but failed to take them.

And it was only in the 85th minute, that Mkhitaryan scored a brilliant goal to set up a final few nervy minutes for the Nerazzurri.

But the defending champions saw the match out to go top of the league.

The title race is on

This season, Serie A fans have a nail-biting title race to witness as Inter go one point ahead of rivals AC Milan, who have a game in hand.

Both sides have been slogging it out for the top spot throughout the season. However, this season has been the first time in a very long time that both these sides have risen to prominence simultaneously.

While AC Milan are looking for their first Scudetto since 2010-11, Simon Inzaghi’s men are chasing back-to-back titles to cement a legacy of their own.

AC Milan play their next match against a formidable Lazio side with the Serie A top scorer Ciro Immobile in their rank. And Inter would want the I Biancocelesti to do them a favour.

🇦🇷 Lautaro Martinez has been involved in nine goals in his last eight games for Inter in all competitions.

Jose Mourinho’s team has played three matches against his former team this season. And the aggregate score after those three games stands at 8-1. Yes, 8-1. The team from the Italian capital has only managed to find the back of Samir Handanovic’s net once.

While Mourinho has seen some great performances this season, against Inter, they have struggled and certainly looked by far the second-best team in all those three matches.

Inter fans had ignored Mourinho before and during the game vs Roma as today is too important on the scudetto path.

Then at 73’, with Inter 3-0, San Siro erupts for José, and he can’t ignore…#InterRoma pic.twitter.com/fFxpAADZBl

This shows that Roma are a step down in class compared to the league’s big boys.

Whether Roma choose to keep him beyond the summer or not remains to be seen. However, the performances will have to get better and more consistent for them to be a title contender.

Roma’s Champions League charge all but over

With this loss, Roma are now five points behind fourth-place Juventus, who have a game in hand. And with Juventus’ next three games against 10th place Sassuolo, 20th place Venezia, and 19th place Genoa, it is safe to assume that Juventus are unlikely to release their grip on the last Champions League spot.

While Roma face Bologna and a Fiorentina side, who are two points behind them with two games in hand now. This all comes amid the two legs against Leicester City in the UEFA Conference League semi-final. And for Roma, it may be the biggest trophy they could see at the Stadio Olimpico.