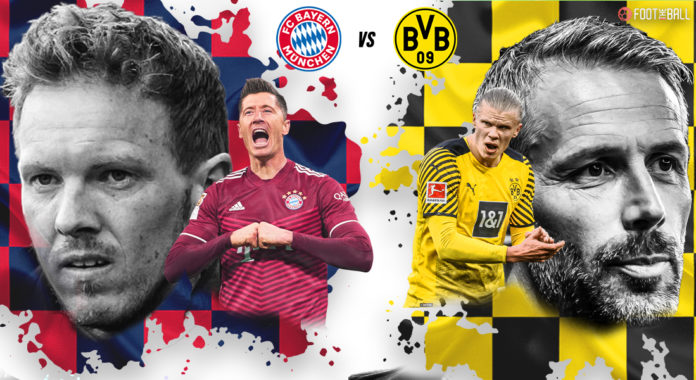 Spain has El Clasico, Italy has Derby di Milano, England has North-west derby, and Germany has Der Klassiker. Bayern Munich will look to win their 10th consecutive Bundesliga title when they take on rivals Borussia Dortmund at the Allianz Arena on Saturday (April 23). Ironically, Bayern Munich can win the title by defeating a team that was the last team other than the Bavarians to win the league.

The team from Munich were on the end of an upset as they crashed as they lost out to Unai Emery’s Villareal. And thus, they would look towards another league title that may mitigate the pain of the loss.

Meanwhile, Dortmund’s main aim would be to delay Bayern’s crowning as champions. Marco Rose’s men have taken ten points from their last five games. However, it includes the 4-1 loss to Domenico Tedesco’s RB Leipzig at home. Thus, a win against Bayern would serve as a perfect boost of confidence for the next season.

The managerial CV Julian Nagelsmann has, fans would have hoped for a better first season, but a league win will at least ensure his job safety for the next season.

With both sides having an underwhelming season, the result will not significantly impact their respective campaigns.

Bayern Munich could be without five players, with Lucas Hernandez, Kingsley Coman, Niklas Sule, Corentin Tolisso, and Bouna Sarr on the treatment table.

In the absence of both Sule and Hernandez, Bayern could line up in a four-man defence.

Youngster Jamal Musiala is now a full-fledged first-team member and could again start in the midfield. Elsewhere, Thomas Muller will become the first player in Bundesliga history to win 11 titles if Bayern take all three points on Saturday.

Meanwhile, Borussia Dortmund would be in high spirits after demolishing Wolfsburg 6-1. Manchester City-bound Erling Haaland scored a brace and would want to end his final days in Germany with a spectacular performance against the Bavarians.

Robert Lewandowski is ageing like fine wine and shows no signs of slowing down. With 32 goals to his name, he is a whooping 12 ahead of second-placed Patric Schick. He was also the only scorer for Bayern against Villareal.

He is on course to become the league’s top scorer for the fifth consecutive season. In addition, if Bayern win, he will win his 10th Bundesliga title, the most wins for a non-German player.

It is finally happening. After months of speculation, it is now confirmed that the Norwegian will join Pep Guardiola’s Manchester City. The 21-year-old is the third-highest goalscorer in the league despite missing a large chunk of the season due to injuries.

He has also been the most accurate finisher in the league. According to data from Soccerment, Halaand has scored 18 goals from 32 shots on target, a success rate of 56.25 per cent.

And if he manages to win the game for Dortmund, it would be a perfect parting gift for Dortmund fans.

Both teams come into the match with wins in their previous games and an underwhelming season. And thus, both teams would desperately want a win to mitigate the disappointment of the current campaign.

Check this out: Jamie Bynoe-Gittens, the next Jadon Sancho

While Bayern Munich would want to wrap up the title in front of the fans, Borussia Dortmund would not want to be the team against whom Bayern won their 10th straight  title.

However, the Bavarians have dominated the Der Klassiker in recent seasons.

FootTheBall predicts a 3-1 win for Bayern with both Lewandowski and Haaland to score.