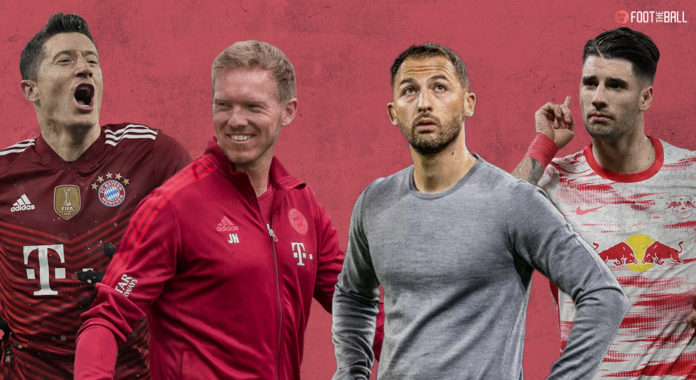 The Bavarians have a healthy six-point gap to second-placed Borussia Dortmund with 14 matches left to play. They have scored eight goals and conceded only once in their last two games, so it is no surprise that they are the top goalscorers in the league by some distance. 23 of their 65 goals have been scored by FIFA Player of the Year Robert Lewandowski who has been breaking records once again.

The veteran Thomas Muller is also showing that age is just a number, having racked up six goals and 16 assists. Bayern are gunning for their 10th Bundesliga title in a row and with numbers like these, it is looking a tall order for their opponents already especially in front of the home fans.

Leipzig have experienced a mini revival under new boss Domenico Tedesco since he arrived in December. He has overseen five wins in the seven games since across all competitions, including a run of three consecutive victories coming into this match. Christopher Nkunku is having a career season with nine goals and seven assists already, leading both those charts for his club.

Joško is getting ready for Saturday 🛡️

They have a young squad that has failed to live up to its full potential this season due to an uncharacteristically slow start in the early games. However, the best time to face Bayern, if any, is now for Leipzig given how a run of good form has strengthened their belief of getting back into the top four.

Julian Nagelsmann confirmed in his press conference that Alphonso Davies and Leon Goretzka are both out for the near future. Lucas Hernandez is back in training and should at least be on the bench.

🗣️ @J__Nagelsmann on @AlphonsoDavies: "Phonzy is doing well, and I spoke with him last week. Of course he's been a bit bored. Once the four-week period has passed, then we will do further tests. We'll see what the medical imaging reveals then." pic.twitter.com/lVtfq9J902

There are no fresh injuries to report for the away side with Tyler Adams and Marcel Halstenberg the only absentees.

There are no better number nines in the world than “Lewan-goal-ski” right now. After 41 league goals last season, he is on pace to get close to that mark once again. His predatory nature sees him score from all different angles and from distance too. Lewandowski’s varied skill set makes him a danger from crosses especially, and Bayern have some of the best passers in football. Leipzig have not been too reliable at the back, being cut open far too easily during transitions and the midfield has been porous.

If Muller or Leroy Sane or even Joshua Kimmich can switch the ball from defence to attack quickly, Lewandowski will be business and few can stop him when in this mood. Moreover, he is also a deft passer of the ball and can set up chances for his teammates too.

Nkunku’s brilliant season could mark yet another fascinating chapter tomorrow if he can be instrumental in upsetting the applecart. The French attacking midfielder has been playing as a second striker at times, having honed his finishing and shooting abilities immensely. Bayern have shown that they are susceptible to quick attacks as Borussia Monchengladbach exposed so ruthlessly, and Tedescu will be looking for something like that.

Furthermore, he is a wily player off the ball as well, able to take up free spaces and coordinate attacks. If he gets able support, Nkunku can be a real danger with his quick feet and deadly shooting. Andre Silva’s poor form has necessitated Nkunku needing to play well and he has shown up.

It is hard to see how Leipzig can stop Bayern at home but no doubt it will be an entertaining clash. FootTheBall predicts a 3-0 win for the Bavarians.