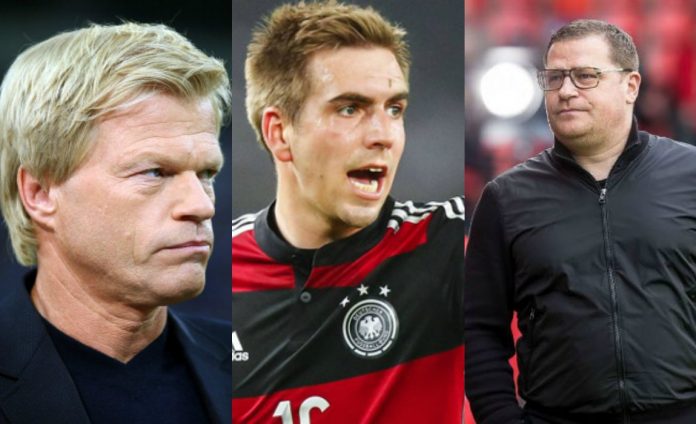 The 2017 German champions Bayern Munich are encountering more trouble than expected in their search for a new director of sports.

Hoeness announced the club will present the new incumbent within the next six weeks. The club’s executive management seems to be in a hurry as the new season is about to start and both fear another year without a major international success.

The “Sueddeutsche Zeitung”, the Munich-based daily newspaper, believes the Bayern management is on red alert.

Despite the good reputation of the 2017 German champions, not many people seem to regard the position as their dream-job as Hoeness and Rummenigge make all the important decisions.

Despite the post only having minor influence, Bayern leaders regard it as being vitally important. They however disagreed in whom they should appoint – Rummenigge’s first choice was Lahm while Hoeness wanted Eberl. In the end, both candidates lost interest because it took too long to come to a decision.

The new man will have the remit to keep an eye on the team and coach in their daily work and work as a go-between. Additionally, the club leaders expect additional inspiration for the team as they do not only want to rely on coach Carlo Ancelotti.

After Lahm and Xabi Alonso’s retirements, the team needs to be restructured in order to be competitive enough to challenge top international opponents.

The upcoming season is regarded as being Ancelotti’s last chance to deliver a better performance on the international stage. Last season’s loss as in the Champions League quarterfinals against Real Madrid caused huge disappointment within the club.

It will be a part of the new man’s job profile to report any troubles within the team to the club’s top management.

In his time in the job, Sammer was present at every single training session and always had the closest contact to the team alongside the coaching staff.

But Lahm, Kahn or Eberl demanded more influence in the form of a seat on the club’s board and were not willing to only accept a secondary role in the shadow of Hoeness and Rummenigge.

The new direstor of football is seen by some pundits as an interim solution before Lahm takes over in possibly 2018 or 2019 when Hoeness or Rummenigge may resign or allow a third executive manager in a transition period.

Lahm, for instance, mentioned Hoeness’ desire to stay in control as one of the reasons for him not to accept the offer.

Klose and Van Bommel cannot rely on managerial experience and therefore are expected to accept what Bayern currently has to offer.

Linke recently worked as a managing director at FC Ingolstadt who were relegated last season and would be the candidate with the most experience.

All three candidates are former Bayern professionals which seems to be important as Rummenigge and Hoeness want someone with internal knowledge about the club’s structure and requirements to address all needs.

According to the Bild tabloid, Klose seems to have the best chances as the former striker is currently on the China and Asia tour with the Bavarian club. His role is to attend marketing and customer relations events, as the club told German media in an official statement.

Klose, who played 98 games (24 goals) for Bayern between 2007 and 2011, will not be involved in scouting or squad planning matters as this is responsibility of technical director Michael Reschke. Kathleen Krueger on the other hand takes care of travel planning and team accommodation.

Former German international Lothar Matthaeus warned about Bayern Munich’s future. The club leaders have to solve the problems in advance of the Bundesliga season, said the former Bayern and Germany captain.

And the team will have to deliver good results right from the beginning of the season. Otherwise the club will find itself in the midst of a crisis.