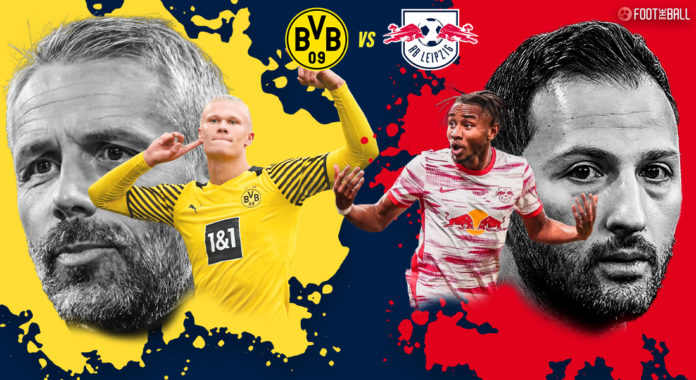 Borussia Dortmund will be looking to keep pace with leaders Bayern Munich, while RB Leipzig will aim to solidify their presence in the top four when the two teams meet at the Signal Iduna Park on Saturday, April 2. It’s a high stakes game for both teams that will also have consequences for the other clubs.

The host Dortmund have taken 11 points from their last five games, the same as Bayern.

Ideally, Marco Rose’s men want to win their next three matches before facing Bayern at the Allianz Arena.

Meanwhile, Leipzig have failed to match the highs of their previous campaign.

This season, Domenico Tedesco’s men have been unlucky, and the stats prove it.

According to Soccerment, Leipzig expected goals (xG) tally for this season was 55.76, while they scored 57 goals. On the other hand, Dortmund had an xG score of 52.24 but have managed to find the back of the net 67 times.

Some huge #Bundesliga matchups on the way next month. 🙌 pic.twitter.com/96qztJwg4K

Marco Reus was back in training for Dortmund after missing the previous four games due to illness. If fit, he can significantly improve the team’s offense. BVB have taken eight points in the four games that Reus has missed. If Reus does come back, it will be one of Thorgan Hazard and Marius Wolf who drop to the bench. Julian Brandt could also be in the mix for one of the attacking positions.

Excited to play your first match in front of a full stadium in Dortmund, @BellinghamJude? 👀

Meanwhile, Leipzig has a fully fit squad to call upon except centre back Lukas Klosterman. Simakan, Orban, and Gvardiol will be the back three for the team in his absence. Benjamin Henrichs and Angelino will be attacking wing-backs, and Emil Forsberg playing just behind Christopher Nkunku and Andre Silva.

For most of the season, Borussia Dortmund have drawn matches that they really should have won. And their defence is still the fifth-best in the league with 38 goals conceded, the same as second-last placed Arminia Bielefeld.

But it is Erling Haaland who is the ultimate game-changer. The Norwegian is the this-highest goal scorer in Bundesliga despite missing more than two-and-a-half months of action. He has failed to reach the heights of previous seasons due to injuries, but Haaland can be more than a match for any defence on his day.

Die Roten Bullen have had a frustrating season to contend with as they are in the middle of an intense battle for the last two Champions League spot. And one of the reasons that they are still in the top four race is Christopher Nkunku.

This season, the Frenchman has genuinely burst onto the scene with 15 goals and nine assists to his name.And he will be the key for Leipzig if they are to come out with something from the Westfalenstadion

Both Dortmund and Leipzig come into the match after taking 11 points from their last five games. And on paper, it looks like quite an even match. However, Dortmund have the home advantage, and the atmosphere at Signal Iduna Park can be pretty inspiring. Leipzig also have only the seventh-best team in away games.

Foottheball predicts a 3-1 win for Bourssia Dortmund with Erling Haaland scoring a brace.