Reds get the job done 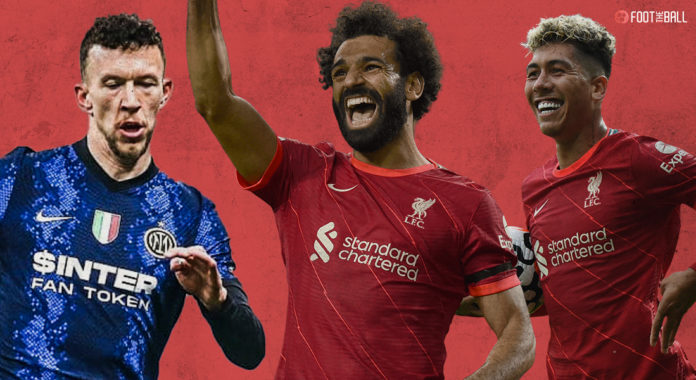 Liverpool beat Inter Milan 2-0 at San Siro in the first-round of the Round of 16 Champions League tie thanks to goals from Roberto Firmino and Mo Salah in the second half after an even contest.

Taking a victory back to Anfield in the #UCL last-16 👊 pic.twitter.com/QkOwWROD6V

Inter Milan came into the match on the back foot after suffering back-to-back blows in their title defence to AC Milan and Napoli. And their start signified a sense of unsurety, with Liverpool finding it easy to enter the attacking third in the opening exchanges.

The Nerazzurri grew into the game with Lautaro Martinez firing a shot just wide in the sixth minute. Liverpool were lacking a bit of bite in the final third but looked dangerous from set-pieces. Fabinho, who already has five goals in 2022, got on the end of a Trent Alexander-Arnold corner but was deterred by Skriniar and Thiago’s volley glided over the top on the rebound.

8' – The hosts give the ball away and Mane plays it in to Salah, whose shot deflects off de Vrij out for a corner. Trent's delivery almost falls kindly for Fabinho but it's blocked.

Their next chance also came from a set-piece, this time from an Andy Robertson free kick. The Scotsman found Mane free at the far post but the forward was unable to test Samir Handanovic in the Inter goal.

That seemed to wake the home side up as they looked to strike back. The wing-backs – Ivan Perisic and Denzel Dumfries- looked like their most plausible attacking outlet and it was the former who created their first big chance of the match. The Croatian made inroads down the left and crossed low for Hakan Calhanoglu. The attacking midfielder’s shot beat Alisson but cannoned off the crossbar.

The Reds best chances continued to come from dead balls. First Mane fired a bicycle kick into the side netting after Konate’s header from a Robertson corner. This was followed by a dangerous free-kick from Alexander-Arnold which was just wide of the post.

Diogo Jota, quiet so far, sparked into action, needing an important block from Stefan de Vrij. Liverpool increased the tempo but still were unable to fashion a shot on target in the entire half. The same went for Inter who looked to break on the counter and nearly scored from a set-piece of their own with Skriniar heading wide from a Calhanoglu corner.

Inter started the second half much sharper with Perisic looking exceptionally bright. Alexander-Arnold was caught out multiple times defensively and Liverpool were lucky none of Perisic’s four dangerous crosses soon after the restart were converted.

Jurgen Klopp threw on Luis Diaz, Jordan Henderson and Naby Keita to turn the tide but Inter continued to find acres of space in the attacking half.Edin Dzeko did have the ball in the back of the net on the hour mark after being played through by Dumfries but the flag went up soon after, as most people in the stadium expected.

Substitute Diaz was on the end of Liverpool’s first good chance of the second period but his shot was well blocked by Skriniar. Inter continued to dominate and Dumfries had a good chance from another corner but his header was not well-directed enough.

It was from a corner at the other end that the breakthrough finally came in the 76th minute. Half-time Roberto Firmino got on the end of a Robertson delivery and placed his header perfectly past the outstretched Handanovic to giver Liverpool the lead.

The home side continued to attack, with more conviction in search of an equaliser. Perisic hit a half-cleared lose ball but his attempt curled just over. Inter were made to pay for their profligacy when Liverpool doubled their lead in the 83rd minute.

Alexander-Arnold pumped in a high ball into the box towards Virgil van Dijk. The Dutchman knocked the ball down backwards towards Mo Salah who hit it first time. The connection was not the purest but the shot was deflected in for 2-0.

LIVERPOOL GET THE JOB DONE

Liverpool are unbeaten since late December in all competitions but there remains an air of underperformance about the side. They were far from their fluent best in the absence of Mane and Salah and their return has not changed things much.

Klopp though has instilled a certain ruthlessness and the Reds showed that side of theirs on Wednesday, especially in the second half. The two goals were the side’s only shots on target throughout the ninety minutes. Klopp will be pleased with the result but his side needs to step their game up if they are to go deep in the tournament.

The coming summer transfer window is an intriguing one given the large number of high profile players finishing or entering the last year of their contracts. Among them, somewhat hidden, is Ivan Perisic who turned in an exceptional performance on the night and was unlucky to be on the losing side.

The wing-back was full of energy, repeatedly getting in behind Alexander-Arnold. His crosses were dangerous and his build up play precise. Inter lacked a bit of synergy in the final third to make the difference but Perisic did himself well and any suitors watching will leave San Siro impressed.

Inter were arguably the better side over the ninety minutes but a two-goal deficit is hard to overturn. It is even harder to overturn it away from home, and perhaps the hardest to do so at Anfield. Liverpool have made the stadium a fortress under Klopp and it is difficult to see a comeback materialising, especially given the removal of the away goals rule.

Football is a weird game though and stranger things have happened in the sport. If you are a betting man though, you would not bet against Liverpool to reach the quarterfinals.