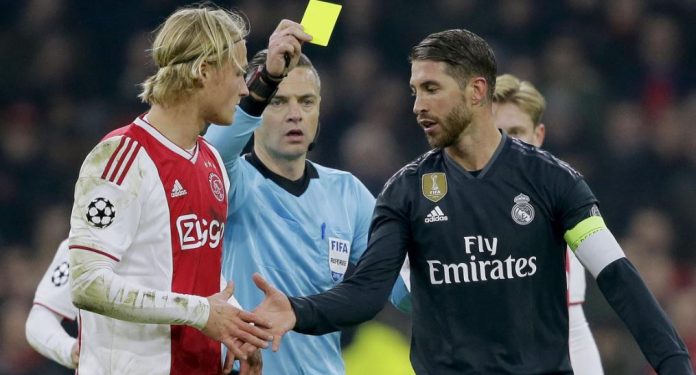 Real Madrid captain and defender Sergio Ramos is in the news again for all the wrong reason…again!

The latest debacle occured when Los Blancos faced Ajax in their first leg of the Round-16 Champions League match where Ramos was given a yellow card at the 89th minute of the game. It was later alleged that the Spaniard deliberately got himself booked when speaking to media post-match.

Speaking on TV directly after the final whistle, Ramos strongly implied that he had deliberately taken a yellow card, saying: “there are times in football when you have to take complicated decisions and that is what I did.”

Those words mean he now faces a two-game ban under Article 15c of UEFA’s disciplinary rules and although the player later took to social media to deny any intent, his post-game declaration appeared to indicate otherwise.

UEFA confirmed it would investigate whether he deliberately picked up a booking.

No está bien @sergioramos ! WHAT SHOULD BE THE PENALTY?

The booking Ramos saw for a foul in the middle of the pitch means he is set to miss next week’s return leg in the Santiago Bernabeu, which Madrid are clear favorites to win, but would also mean he would be clear of bookings for the closing rounds on the tournament.