Gunners give Chelsea the blues 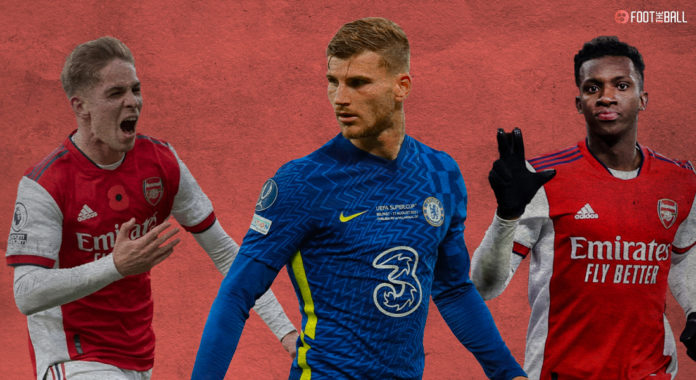 Two familiar rivals each needing points for their purpose. Chelsea looking to cement the third spot while Arsenal are in an almighty scrap for fourth.

The Blues held the edge over the opening 10 minutes but it was Arsenal who took the lead. Andreas Christensen’s underhit backpass to Edouard Mendy set Eddie Nketiah free. The striker made no mistake one-on-one with a deft finish. However, he would become the villain less than five minutes later.

🙌 One-nil to THE ARSENAL

Nketiah gave the ball away near the Arsenal penalty box. Timo Werner received it and aimed a speculative shot that took a wicked deflection of Granit Xhaka to wrongfoot Aaron Ramsdale. All square with less than 20 minutes on the clock. The game took another turn in less than eight minutes.

A brilliant counterattack from the visitors started by Xhaka near his own box found Bukayo Saka. The winger fed it into Martin Odegaard whose layoff was passed into the net by an onrushing Emile Smith Rowe. Arsenal back in front but just like last time, Chelsea would come roaring back soon.

Concerted pressure down the left saw Mason Mount supplying a cross. Cesar Azpilicueta charged into the box past Nuno Tavares to poke an effort past Ramsdale. 2-2 and this game was not looking anywhere close to being done. There were no goals till halftime with both managers needing to calm their defences down.

The fifth goal arrived just after 10 minutes into the second half. Azpilicueta gave the ball away in a dangerous position before it made it into the box. Thiago Silva and Malang Sarr were harried by Nketiah with the ball bobbling around. Finally, it was the striker who scored to restore Arsenal’s lead.

Chelsea were dominating possession as the game entered the final 20 minutes. Arsenal were sitting deeper and deeper to defend the slender lead. The game was getting very stretched towards the end. Both teams were running forward at every opportunity. The home side still saw much of the ball. Then another mistake popped up. Azpilicueta wrestled Saka to the floor inside the penalty box. A penalty was conceded and Sake made no mistake from the spot to seal a solid away win.

🎯 Saka puts the penalty away!

It was always going to be a different evening for the backline. Without Antonio Rudiger and Thiago Silva rested, Thomas Tuchel decided to bring in Romelu Lukaku. Neither of the three decisions worked. The defence was all at sea for most of the game. Christensen was hooked at halftime after a horror show.

Mason Mount's form since getting his haircut:

The Chelsea fans were right. 💈 pic.twitter.com/EGKfuTu4AN

Lukaku lasted an hour with minimal impact. Werner was the most brilliant player, constantly getting on the ball and looking to make things happen. Azpilicueta conceding the penalty was the icing on a poor day. The overall display was very poor and it is no surprise that Arsenal were able to win at the end.

The Gunners themselves were no great teachers of defence. Fortunately for them, Nketiah was on fire and more. Their excellent attacking players were the difference along with some help from Chelsea of course. Nketiah’s brace and a smart finish from Smith Rowe were enough for the points before Saka smashed home a penalty.

10 – Emile Smith Rowe is only the second @Arsenal player aged 21 or younger to score 10+ Premier League goals in a season, after Nicolas Anelka in 1998-99 (17). Special. pic.twitter.com/YFNooWrBIB

Xhaka was excellent on both ends of the pitch. However, some persisting problems remain. Nuno Tavares did not have the greatest games. The absence of Thomas Partey in midfield. They need to get their defensive act together if Mikel Arteta hopes of getting back into the Champions League.

Back to top four

Arsenal are back into the top four conversation, level on points with Spurs. The North London Derby is still to come and can act as the decider. For Chelsea, the gap to Gunners is cut to just five points. Their season is in danger of going off the rails.