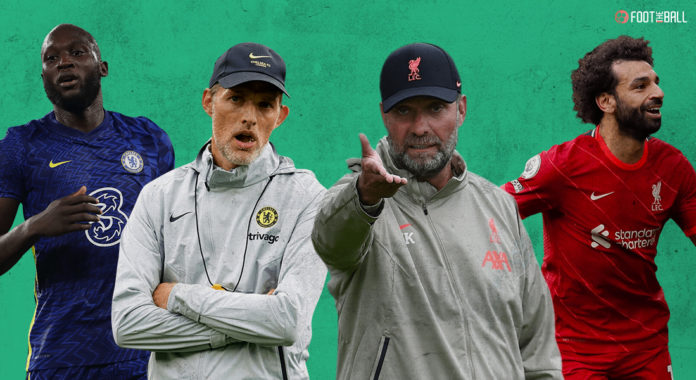 A Sunday night blockbuster in the Premier League as a limping Chelsea side host a bruised Liverpool outfit, both in desperate need of points.

The Blues have been in an indifferent run of form, problems compounded by injuries and covid issues. They have drawn their last four home games, winning just twice in the past five matches.

"A clear penalty… not even checked. Everything against us”

Thomas Tuchel has tried a variety of attacking combinations in recent times, with Romelu Lukaku’s return being a welcome boost as he has scored in both his games. However, their defensive woes got worse against Brighton with Reece James and Andreas Christensen having to be replaced due to a hamstring and back issue respectively.

Chelsea have won just ONE Premier League game at home since October 😳 pic.twitter.com/eJvWjbBukW

Chelsea are eight points behind Manchester City, with the gap potentially being 11 before they kickoff. Though he has already conceded the title race, no doubt a win here will bring back some belief in the camp.

Liverpool, meanwhile, suffered a major jolt to their own title dreams in a shock loss to Leicester City. That came on the back of a 2-2 draw against Spurs, dropping the Reds down to third though with a game in hand.

Jurgen Klopp has been moaning quite a bit regarding the fixture congestion which leads to little rest in-between games but has found little sympathy. Roberto Firmino has returned from injury to strengthen the lineup and they have almost all of their starters available constantly.

The more pressing issue could be that this could be the last match for Mo Salah and Sadio Mane with AFCON starting next week. They will be looking to have a goal-filled sendoff and help Liverpool climb above their opponents.

Alongside James and Christensen, a number of first-choice players including Timo Werner, Thiago Silva, and long-term absentee Ben Chilwell will continue to miss out.

Not a good sight for the sore eyes of Thomas Tuchel…

…Reece James down and substituted with an injury. 😩 pic.twitter.com/xKGal1y0ol

Andrew Robertson is suspended having been sent off against Spurs. Thiago is also likely to remain on the sidelines.

Romelu Lukaku coming back straight amongst the goals is the one positive for Chelsea currently. The big Belgian is essential to Chelsea’s remaining title hopes and the first big test starts on Sunday. Lukaku’s physicality is well known and that has to come to the fore against the two central defensive behemoths of Liverpool.

If he can hold the ball up for his teammates and win the aerial duels, Chelsea will be having strong chances of scoring. Their attack has been a bit disjointed due to the chopping and changing but Mason Mount is an able support in behind him. Furthermore, Lukaku can also cover large swathes of ground quickly with the ball and draw fouls so set-pieces should be another way through for the Blues.

Both of Liverpool’s centre-backs tend to push forward with the ball at times so if Chelsea can counter quickly, Lukaku is the perfect candidate to apply the finishing touches.

For Liverpool, it is hard to look past Salah as their go-to man nowadays. The history making Egyptian has been firing on a different level since the start of this season. It has not only been about the frequency of his goals (22 in all competitions) but the sheer genius behind some of them.

Mohamed Salah has been directly involved in more goals than any other player in Europe's top five leagues this season:

Granted he missed a penalty and the rebound against the Foxes but even the best falter at times. He will be up against Marcus Alonso, who is not the quickest and had a torrid time against Brighton. Moreover, he loves getting forward, which means there will be spaces in behind.

#Chelsea's Mason Mount on his best Premier League player of 2021:

It is given that if Salah makes his way inside the penalty box, the chances of scoring increase manifold. Furthermore, his sharp eye for passing means that he can assist goals (nine so far) from the deep too which will worry the entire backline.

The two sides shared two goals evenly the last time they met back in August and another draw could well be the most likely outcome. FootTheBall predicts a 1-1 draw at Stamford Bridge, not out of line with Chelsea’s recent luck.