Blue against Red at Wembley! 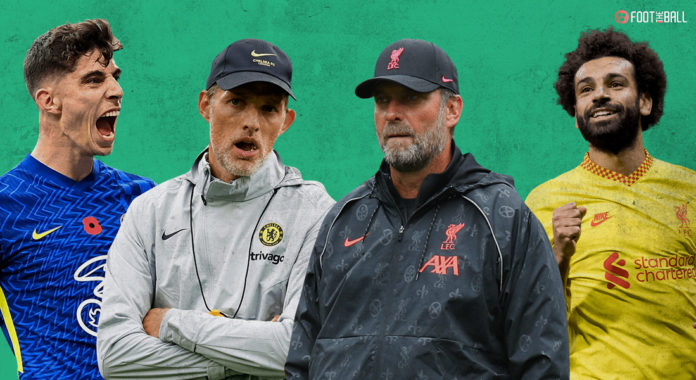 The first final of the English footballing season is upon us and it pits two giants competing for an unfamiliar trophy. Wembley plays host to Chelsea and Liverpool in the Carabao Cup final.

Chelsea are winning trophies left and right so there is no doubt that Thomas Tuchel will be looking to further add to his collection. The Blues have won their last six matches across all competitions and despite the stories surrounding Romelu Lukaku in recent times, they have not let their focus shift.

Chelsea’s greatest strength lies in their defence with just two goals conceded during this period while their scorers have been varied.

Granted they have not been tested much in recent times but Tuchel’s intense practice sessions have always made sure that Chelsea remain in peak condition. Kai Havertz and Christian Pulisic have always performed the task when called upon while N’Golo Kante was a key difference maker against Lille. They will once again be called upon in this crunch clash.

Liverpool are back to their mean best with Mo Salah and Sadio Mane in the team. They have nine straight games across all competitions and smacked Leeds United for six in their most recent outing.

The African duo have combined for seven goals and an assist since returning from AFCON duty while Diogo Jota remains another key threat. Luis Diaz has settled in nicely and offers a solid punch to the Reds’ multi-pronged attack.

“You face a lot of challenges on the way and then when you make it to the final, then it’s big and I know the people are buzzing as well." ❤️

If we can overcome Chelsea and lift the Carabao Cup this weekend, Jürgen Klopp would consider it a triumph produced by the whole club 👇

The centre-back duo of Joel Matip and Virgil van Dijk are playing some of their best football currently and Chelsea will have a tough time competing against them. Jurgen Klopp knows that this is the best chance to win the League Cup which should provide further impetus to keep the chase for the league title going solidly.

Hakim Ziyech and Mateo Kovavic went off injured in their Champions League match putting their participation in doubt. Mason Mount should be back on the bench.

Diogo Jota looks to be back on the bench after an ankle injury but Roberto Firmino will miss the tie.

Given the ferocious nature of Liverpool’s frontline, it makes sense to highlight a defender as being the most important player for Chelsea. Thiago Silva has been ageing like a fine wine with one vintage performance after another.

His sense of timing and ability to get to the ball before the final pass is played. Silva’s tackling and prowess inside his own area make attackers hurry to make a decision. Salah and Mane are experts in confusing defenders with their quick switch in directions but Silva knows that he cannot be fooled.

12 – Chelsea's 37-year-old centre-back Thiago Silva won possession 12 times tonight against Lille, the most he's ever done so in a Champions League match, with tonight his 94th appearance in the competition. Rock. pic.twitter.com/UhLL840KzP

If he can keep the attackers outside of the penalty box and force them to shoot from distance, which can result in winning possession more often. Alongside Silva will be the ever dependable Antonio Rudiger who always loves a good challenge. Though Silva may not be the quickest defender around, his leadership skills and cool head will be key in organizing the backline in an orderly manner.

It is no surprise that Salah is leading the attack once again after such a hot start to the season with Liverpool. The right-sided attacker scored a brace against Leeds, and caused trouble for the brittle defence all evening long.

Strong numbers from the Reds 👏🔢 pic.twitter.com/ROKz2im850

The Reds look to funnel their attacks through their right, which might make them a bit predictable but the fact that Salah can beat any defender on his day makes him such an unstoppable force.

He will be looking to get in behind defenders as often as possible, taking on shots with increasing regularity. Marcos Alonso will have a tough time dealing, given his lack of pace so it will add to the workload of the central defenders in trying to come wide. That might leave spaces through the middle for the other strikers to take their chances.

With Manchester City not in the fray for the first time in four years, this final will be more unpredictable than most years. Both the participants are heavyweights in their own regard which makes this an extremely tough match to call. FootTheBall predicts a 2-1 win for Liverpool.