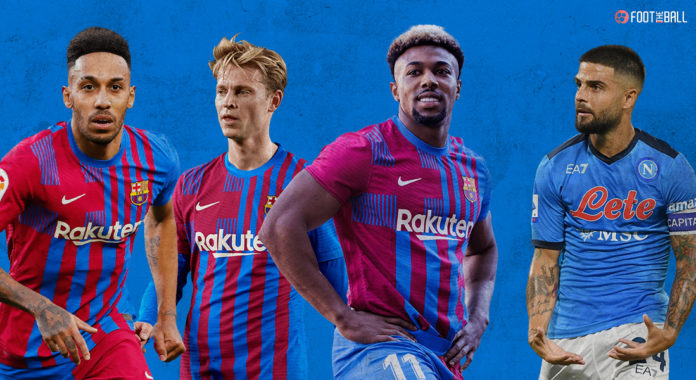 Barcelona produced perhaps their best display under Xavi as they crushed Napoli 4-2 in the Maradona derby to qualify for the Round of 16 in the Europa League. Pierre-Emerick-Aubameyang, Jordi Alba, Gerard Pique and Frenkie de Jong scored for Barcelona while Lorenzo Insigne and Matteo Politano scored for Napoli.

In the first leg, the teams had played a 1-1 draw with Piotr Zielinski and Ferran Torres scoring for their sides.

And it was the visitors who took the lead in the eight-minute. Napoli won a corner but Insigne’s tame effort led to a Barcelona counter-attack which ended with Jordi Alba scoring the opening goal of the match.

Their lead doubled just five minutes later after some sloppy play from Napoli. Ferran Torres won the ball in the midfield before passing it to Frenkie de Jong who took a couple of touches before unleashing a powerful curling effort past the hapless Alex Meret.

Xavi’s team had two quick chances to extend their lead but failed to do so. And then Napoli got one goal back.

Victor Osimhen sneaked behind Barcelona’s defence but was fouled by Marc Andre-ter-Stegen in the penalty area. Lorenzo Insigne took the responsibility and slotted the penalty into the bottom left corner. The goal uplifted the mood of home fans at the Diego Maradona arena.

However, Barcelona continued to dominate with their immaculate style of pressuring the opponents in their half. Napoli’s defence made several mistakes as they stick to their philosophy of building up play from the back.

Barcelona had two chances within minutes but both de Jong and Aubameyang failed to capitalise on them. Their persistence however paid off as they scored their third of the night.

Napoli conceded a corner which they failed to clear. The ball eventually found its way to Alba whose deflected cross was latched on and turned in goal by Gerard Pique to restore the two-goal cushion just before half-time.

Piqué makes it 3-1 on the night for Barcelona 👏#UEL https://t.co/7MW5b9Qnt0 pic.twitter.com/V6zkLJzZDw

Luciano Spalletti responded to his side’s under-par first-half display by bringing on Politano.

However, it was all over in the 59th minute as Pierre Emerick Aubameyang scored his side’s fourth goal. It started with Traore who worked his magic on the right before putting the ball into the box which was blasted into the goal by the former Arsenal captain.

Napoli did get back a goal after some sloppy defending from Barcelona but the Catalans saw out the match ensuring that they didn’t end up on the receiving end of another comeback.

Despite an all-around performance in all departments, it was the front three that were the star for the Spanish side. Adama Traore, Ferran Torres and Pierre-Emerick-Aubameyang. The trio’s created all sorts of problems for Napoli’s defence.

While Aubameyang scored a goal Torres got one and two assists respectively.

The team has struggled when it comes to winning matches by a big margin but this performance shows that at their best they are a dangerous team to face.

Napoli’s defence just didn’t show up for the match. It was a collective display of awful passing, positioning and defending from the Italian club’s backline. Especially on the right-hand side they always lost the ball in dangerous areas as they tried to play out from the back.

Even their most trusted defensive stalwart Kalidou Koulibaly was far from perfect, and it was only Barcelona’s underwhelming finishing that kept them in the match for some time.

Barcelona are the favourites now

This win has to definitely put them as the favourites to win the Europa League. It was a complete performance and the other teams in the competition will have a tough stop stopping the Catalans’ juggernaut.

Also with Barcelona trailing Real Madrid by 15 points (with a game in hand), the Europa League trophy remains the most achievable target. It could also provide a boost to them as they look to regain their former glory.