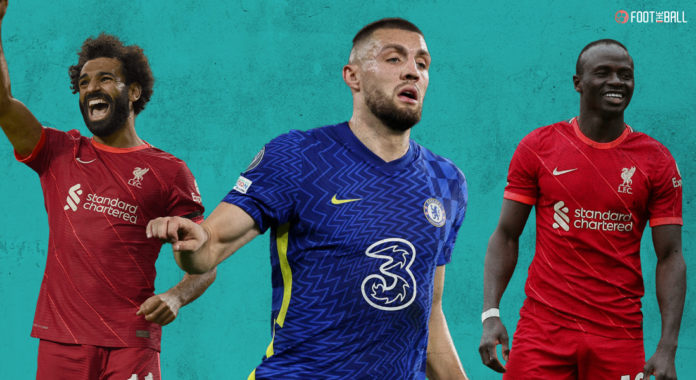 Sunday’s blockbuster clash pitted second vs third. Chelsea, trying to get past the whole Romelu Lukaku situation who was left out entirely, hosting a Jurgen Klopp-less Liverpool. The Reds were further hampered by Alisson, Joel Matip and Roberto Firmino all missing due to suspected COVID-positive tests.

It was an end-to-end beginning over the first 10 minutes punctuated with a goal. Sadio Mane, booked within 15 seconds for elbowing Cesar Azpilicueta’s face, took advantage of a mistake from Trevoh Chalobah. He took the ball around Edouard Mendy and finished expertly.

9' – Chalobah tries to stoop to head Jota's through ball away from danger, Mane pounces on it before rounding Mendy to finish.

The goal came on the back of a great chance for Christian Pulisic, who failed to score from six yards out with Caomin Kelleher nicking the ball off his feet. Mo Salah had also tested Mendy before that but it was the Blues who were seeing a lot more of the ball. But they conceded once again.

Trent Alexander-Arnold’s clever pass over the defence set Salah free, who shimmied past Marcos Alonso before beating Mendy from a very tight angle at his near post. Liverpool were in firm control now, enjoying decent spells of possession.

Chelsea got one back just before halftime thanks to an absolute belter from Mateo Kovacic. A free-kick from Kai Havertz was punched by Kelleher as far as the Croatian just beyond the edge of the box who smashed a first time volley off the post and into the net, all while backpedaling as well.

One became two very quickly, with Pulisic atoning for his earlier poor play. He ran onto a pass from N’Golo Kante and found himself one-on-one with Kelleher, before rifling the ball past him with his left foot. The game was certainly living up to the billing, with one feeling there might be more goals to come surely.

The second half got off to a brisk start, Mane testing Mendy from a tight angle within 30 seconds. The high tempo affair had showed no signs of slowing down yet, with both teams knowing how crucial a win will be tonight. Salah found a yard of space from 30 yards out and before anyone could touch him, tried to dink Mendy. The goalkeeper pedaled back swiftly to produce a superb save as the score remained level.

Minutes later, Mane produced yet another excellent save from Mendy, pushing the shot away with strong hands. Kelleher, not be denied, stopped Pulisic’s shot from four yards out wonderfully well. The game lost a little bit of its frenetic pace as it reached the final minutes, though it was Chelsea who remained on top due to controlling more possession.

66' – Salah finds Tsimikas after a corner. His low shot drifts wide of the Chelsea goal.

Here are the three key takeaways from this epic match:

Of course Thomas Tuchel would have preferred the win but given the circumstances the club finds itself in, a draw would be almost as sweet. They were in much more control of the match than Liverpool for large periods and were unjustly two goals behind in less than 30 minutes.

What a way to achieve your personal best! 🚀#CHELIV pic.twitter.com/nZfdw0WQnF

However, they responded superbly inside two minutes, with Kovacic’s strike being the pick of the lot. Mendy was in supreme form in the second half, singlehandedly responsible for keeping the score level. Pulisic had a good chance to score again but the draw was a fitting result surely.

Two goals but still settling for a point? Jurgen Klopp will not be too enthusiastic. Kelleher put in a top performance, but Ibrahima Konate struggled mightily due to a lack of pace. Despite that, they had a bucketload of chances to win but Mendy remained the brick wall he is.

The goals, one courtesy of a mistake and the other a sublime piece of play from Salah, would have been enough to win most matches but their defence was too open for most of the match. They could have lost it as well towards the end but held firm enough to pick up a draw.

A real possibility given the results over the last two weeks. City won consecutive matches while Chelsea and Liverpool picked up two and one point respectively. The lack of defending tonight provided fans with a thrilling match but the draw left things as they were. It is definitely City’s to lose now, despite Pep Guardiola asking for calm just yet.