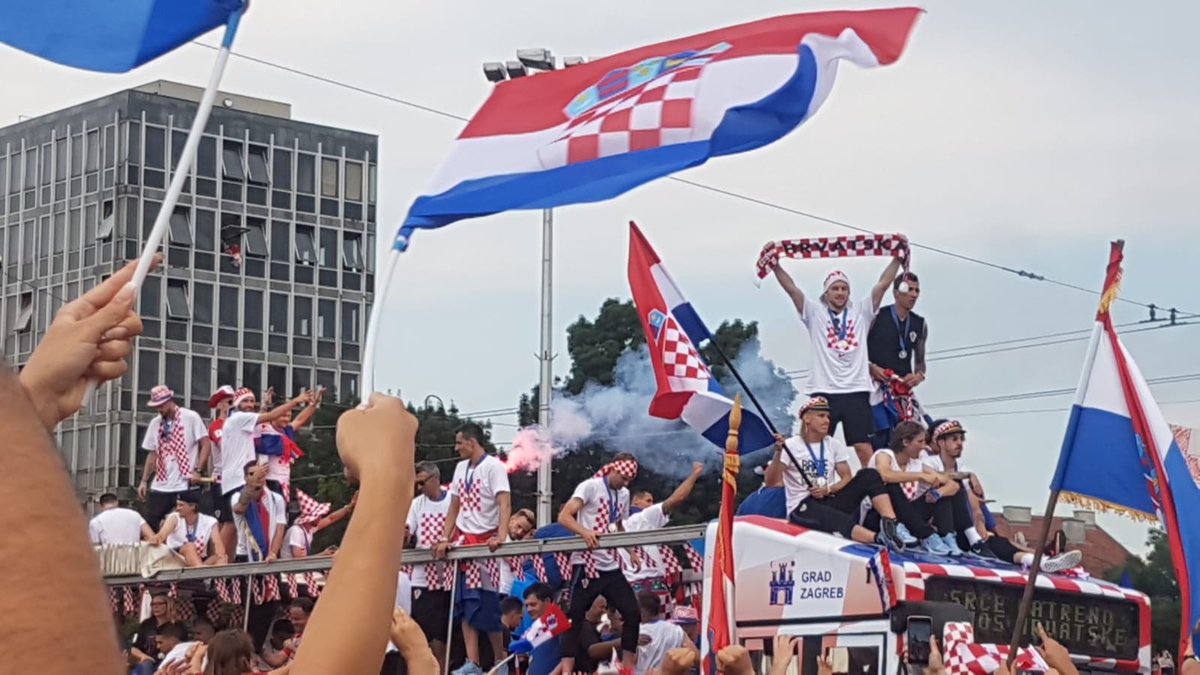 More than 400,000 people filled the streets and squares of the Croatian capital Zagreb on Monday afternoon to stage an unseen welcome-back party for the national football team.

Croatia lost their World Cup final against France but won the hearts of their nation. The Croatian team, led by the Golden Ball winner Luka Modric, landed at Zagreb Airport at 3:22PM local time.

Ten minutes later they got on the open-roof bus and started the journey none of them could even dream of having. The final destination was the main city square, some 20 kilometres away.

According to organisers, the planned time for that journey was 60 to 90 minutes. Just as they needed extra time in three matches to reach the final of the World Cup, more than any other team in the history of the tournament, the Croatian team set another record.

It took them more than five hours to get through the streams of people that flooded the planned route. There wasn’t a single act of violence, not from the fans and not from the policemen that were helping the bus through the river of pure joy.

There is no doubt that losing to France filled the hearts of Croatian players with sadness because for the some parts of the final they were the better team, but France had more luck and was more clinical in front of goal.

“It is impossible to describe how you’ve made us feel and thank you for that,” said Ivan Perisic, one of the two Croatian goal scorers in the final.

This country has seen some wild celebrations throughout the years, the first one being in 1998, when the “Golden Generation” won the bronze medal at Croatia’s first World Cup experience.

Goran Ivanisevic’s unprecedented wild-card Wimbledon triumph in 2001 sparked his hometown Split to throw him the most deserved welcoming party. At the main square in Zagreb, Croatian fans celebrated with Janica and Ivica Kostelic when they won Olympic medals and World Cups in alpine skiing.

“Thank you Croatia, thank you Zagreb. This is a dream come true,” were the words from Croatian skipper Luka Modric, the best player at the World Cup in Russia.

“When we see this, we know that we were all together in Russia. We will fight to make you proud and happy in the future,” Ivan Rakitic said, sparking loud cheers from the fans.

Croatian people know how to show love for their sporting heroes but what happened in Zagreb on Monday was something that was beyond every expectation and something that all the members of the Croatian team will never forget.

“What you’ve done during the last 45 days is something that no one ever did for us,” said Vedran Corluka, one of the longest serving members of the team.

For most of the planned route the bus drove at walking speed so fans could throw jerseys, flags, hats to get an autograph or take pictures with the heroes in the background. When the bus finally reached the main square, one by one, players took the big stage where they were greeted by more than 100,000 fans.

Cheers were getting louder and louder and reached their peak when coach Zlatko Dalic was the last one to get the microphone.

“These players wore the national jersey with pride and you’ve recognised that they’ve left their hearts on the field. You were the best fans in the world,” the new national hero said and sparked chants of “champions, champions” from the crowd who had spent over 10 hours under the sun during the day and a few rainy hours in the evening.

Live TV coverage from national TV stations lasted even longer. The journey turned into the biggest party this country has ever staged and took so long that even the Croatian President Kolinda Grabar-Kitarovic had to reschedule her planned reception for the members of the team that will receive medals for their exceptional result and service.

This journey will forever live in the hearts and minds of the players. They were showing the silver medals that they received on rainy Sunday night in Moscow. However, 24 hours later, on a sunny day under a blue Croatian sky, one could easily mistake them for gold.