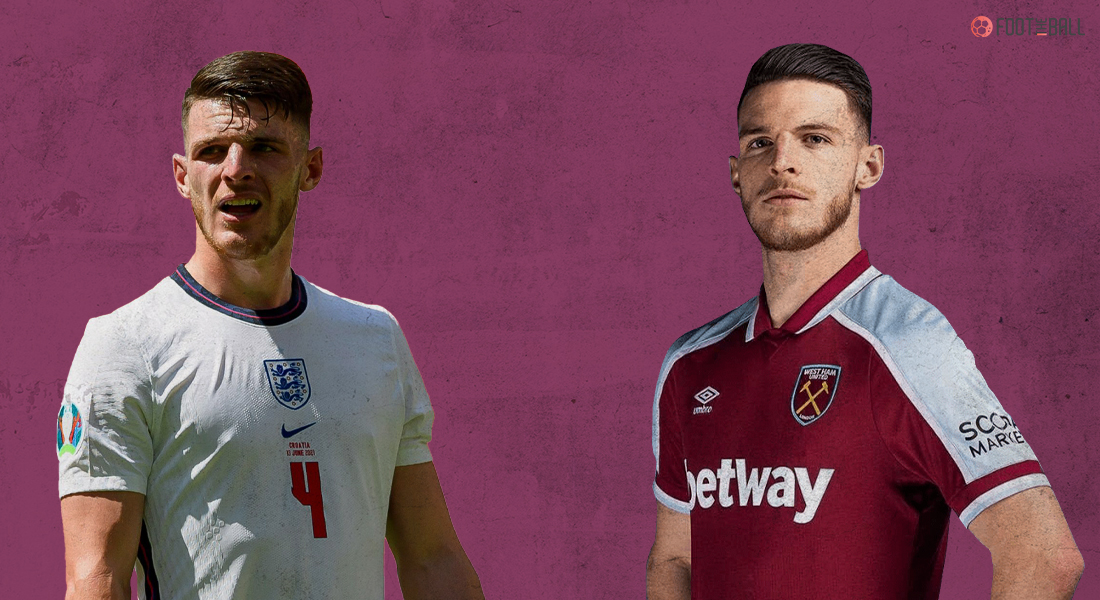 West Ham United have been on an upward trajectory of late as they finished 6th last season to make it to the UEFA Europa League on the final day. One of the main reasons behind this has been the continued solid performances delivered by vice-captain Declan Rice.

The 22-year-old has been an ever-present with the Hammers since his breakout campaign in 2017-18. Furthermore, he has also established himself as a regular for the England team and starred at Euro 2020.

What a player this man has become 👏

Declan Rice is midway through a six-year contract and next summer could prove to be a decisive year for his future, whether it is with West Ham or a rival team remains to be seen.

The 2019-20 West Ham Player of the Year has come leaps and bounds over the past two seasons.

He has a passing accuracy of 86% which increases to over 90% over short and medium distances. Such stats and figures come in handy when you’ve got your eyes set on gaining rewards, and sports betting on unibet helps you figure out stuff exactly like those.

Playing as a defensive midfielder who is an expert in breaking up opposition’s attacks, with 2.06 interceptions P90 in 2020-21. That put him in the top 92 percentile of players in his position across Europe. Furthermore, his tackling success has gone up tremendously with the Hammers winning possession on more than 70% of the time.

Declan Rice has also been helped by being paired with a manager who has brought extensive experience along with an insatiable desire to win. David Moyes’ tenure at West Ham has seen a marked improvement in player performances with the Hammers playing fast and fluid football on both sides of the pitch.

An absolute MASTERCLASS from Declan Rice…

Not only is Rice an exceptionally important part of the puzzle (playing 67 times since 2019), his calm demeanor and immense likeability in the dressing room has made him an ideal figure to have. England’s run to the final at the Euros saw his star shining brighter than ever which would no doubt have excited Moyes and the club.

He had a pass completion rate of 92.7%, 14 interceptions and 12 tackles. The latter two were the highest among all the Three Lions as his partnership with Kalvin Philips blossomed tremendously and gave renewed hope to an underachieving nation for the upcoming years.

His ambition is infectious and with European football this season, there is no saying how high his ceiling truly goes. Needless to say that he has started the 2020-21 season in the same fashion, being the best passer in the team, involved in 3.33 shot-creating actions P90 and has even scored already.

There is little doubt that if he continues playing like this, it will be very hard for West Ham to ward off even greater interest in their star player. The Hammers have strengthened in preparation for that, including getting Alex Kral on loan who might become his successor in the future.

Like all top footballers, Rice’s ultimate goal is to win trophies. He has already said as much, stressing on its importance and how he wants to “aim” for them sooner than later.

Now this is one area that might prove to be the biggest cause for the player leaving West Ham next year along with facing the best players on a daily basis as well. According to The Guardian, Rice has already turned down two offers of renewal and may seek an exit as early as 2022.

Declan Rice takes the crown for the West Ham Fans' Footballer of the Year 👑 pic.twitter.com/Pp4NgwX9AW

Though he is not likely to force a move against the club’s wishes, there has been a significant amount of interest around the Premier League. Former club Chelsea, where Rice spent a large portion of his youth, have been consistently linked with a move but the Blues already have one of the world’s best in that position in N’Golo Kante.

Would Declan Rice find enough minutes in a midfield that also boasts Jorginho and Mateo Kovacic? Looks unlikely and even if he does, he will not be the star player in his area alone. Manchester United have been in need of a defensive midfielder since forever, and the current Hammer would slot in perfectly.

Both of these options represent a much improved chance of getting silverware, but Rice knows that he cannot act too rashly. Moreover, his manager is also dead set against him leaving anytime soon and considers Rice’s value, arguing that he is worth “far, far more than” £100 million.

However, will the owners think the same? They might be tempted to sell instead of waiting around as the volatility of the transfer market ensures that there is no shortage of alternatives. Nevertheless, a lot will depend on how West Ham go about their business this season and especially in the Europa League where both parties will look to impress.

If Rice feels the team is getting competitive, combined with another top-6 finish, might be enough to make him stick around longer.

GOING TO THE TOP

No matter what happens next year, the assuredness and attitude with which he approaches the game has been appreciated by all. In England’s 4-0 win over Hungary a couple of days ago, Rice earned adulation from fans and pundits back home due to the way he approached the racist and confrontational fans.

Choosing to let his game do the talking as he made five recoveries, won five duels and scored the last goal. Rice has all the tools to succeed for years to come with the only question remaining, for whose badge will that come for?