Time for the second chapter!🔥 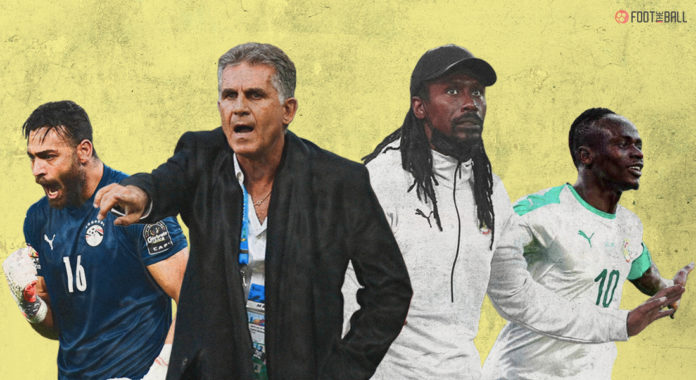 The World Cup qualifiers are back and its the return of two African heavyweights. Egypt and Senegal meet for the first time since the grueling AFCON final in February. Only one of them can go through in this two-legged affair to reach Qatar.

In a final, there has to be a losing side always. That unlucky fate befell on Egypt last month. The Pharaohs fell short of winning their eighth AFCON title and there was some controversy at the end. Carlos Queiroz watching from the stands, Mo Salah not taking a penalty kick, and the overall defensive football.

Mo Salah is training with Egypt ahead of Friday’s World Cup qualifier against Senegal in Cairo. #WCQ #EGYSEN
📸@ThePharaohs_ pic.twitter.com/384S6ky9n7

Nevertheless, the quest for the Liverpool hero to add a national team trophy will have to wait. Mohamed Abou Gabal distinguished himself as one of the stars while Trezeguet is the perfect partner for Salah. No doubt their style of play will also rely on a lot of defensive work this time. The one-headed attack will need to pull their weight in order to vanquish the foe and take revenge.

Senegal were in top form during the AFCON. The Lions of Teranga had a flawless campaign without losing any match. Though there were no goals in the final, Senegal’s superlative spot kicks saw them win the trophy for the first time. Sadio Mane was in top form throughout the competition and he had help with him too.

They have a bevvy of European and continental stars including Ismaila Sarr, Edouard Mendy and Kalidou Koulibaly. Indeed Senegal have gone from strength to strength under Aliou Cisse. They reached the group-stage in Russia which was their first appearance since 2002. The nation will be hoping that consecutive World Cup appearances are on the horizon this time.

The biggest concern for Egypt is surrounding their superstar Mo Salah. The attacker only played for half an hour against Arsenal while dealing with a foot problem. It will likely to be a last day call in whether to play him from the start or bring him off the bench.

The Sengalese have no such injury worries and can field a full strength team.

Sadio Mane is the undisputed star for Senegal and the most effective impact player in the team. He has 14 goals and two assists in all competitions so far for Liverpool. Though he has seen competition increase at the Reds, Mane will be heavily relied upon by Senegal. He was a menace at the AFCON with three goals and two assists. Mane is a very clever operator who can run quick with the ball.

This is one of his favourite fixtures. 🍿 pic.twitter.com/LzYyAL3n9W

That will be key against Egypt given how strong their defenders are physically. Cisse will try to use Mane’s pace and trickery to bamboozle the backline in order to create shooting chances. Though he might not win too many aerial duels, Mane knows that if he can charge often, his teammates will be in business.

Given Salah’s iffy status, the attacking load will increase on his attacking partners. In this regard, Trezeguet is the likeliest to have a major impact. Having seen his opportunities dry up with Aston Villa, the attacker made the move to Istanbul Basaksehir on loan in January. Trezeguet has made a hot start to life in Turkey, scoring four times and assisting once since February.

Another goal for Trezeguet over the weekend. That's 3 goals and 1 assist from his 3 games on loan at Istanbul Basaksehir FK. 🇪🇬 #avfc pic.twitter.com/Zj1IV2LUz7

He mostly operates down the left flank but can also move in centrally depending upon the situation. Trezeguet is also adept at carrying the ball fast and his scoring nous will come in handy. Egypt know that they cannot funnel everything through Salah so he will need all the help he can get.

Chapter two of the rivalry is all set for action. The stakes are high as always and a lead from the first-leg will be half the job done. FootTheBall predicts a 1-0 win for Senegal.