THE EUROPEAN SUPER WHAT??😂 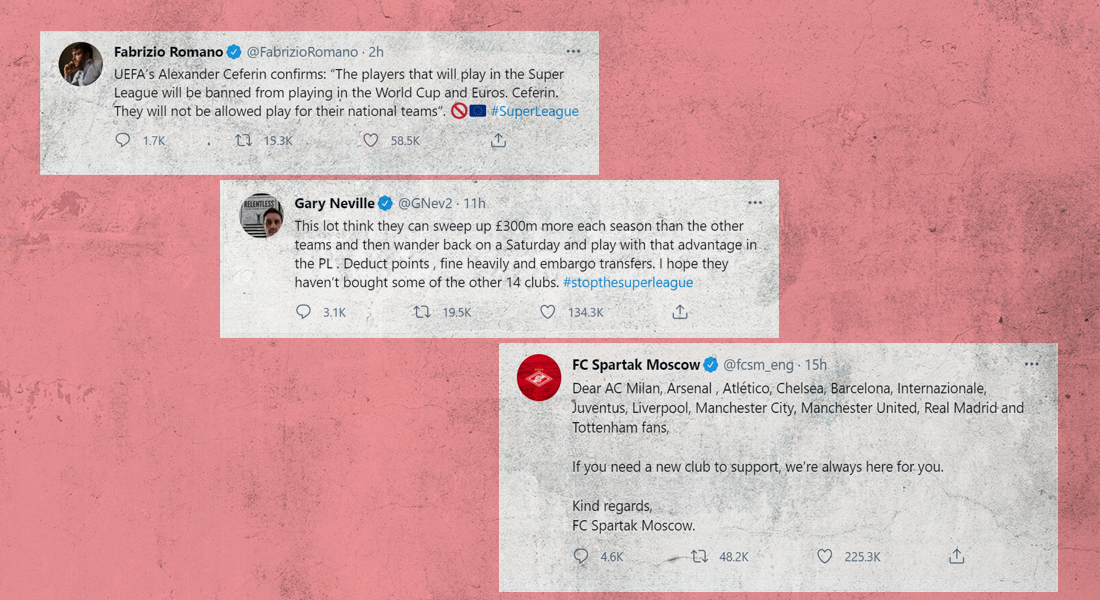 The announcement of the European Super League absolutely shocked the football world. The developments in the last 24 hours tend to shake the foundations built over 100 years ago. A breakaway league with 12 founding members, the Super league threatens the game as we know it. If it comes to fruition, it may sound danger bells to domestic leagues and cups and also European tournaments like the Champions League.

Super league is backed by almost all of the European powerhouses. Big clubs are looking for financial relief from somewhere to cover for the huge losses suffered due to the pandemic. Super League promises just that. Clubs are expected to pocket north of £300 million just by accepting the invitation to play. Nearly all the clubs have accepted the invitation offered. It’s only a matter of time before others accept too.

BREAKING: Together we will be stronger 🏆

This might sound good for the clubs, fans are absolutely hating the idea. Ex footballers have bashed the idea of Super League and have condemned the clubs joining it. Everyone had different opinions. As usual, Twitter was flooded with a multitude of tweets on the topic. Foot the ball brings you some

Football fans across the world have bashed the idea of the Super league. They feel that this decision is solely benefitting clubs and their financial benefits but not the fans and communities.

🎶 The day the football died 🎶

🗣 “Our job is to maximize our revenues. The wider good of the game is a secondary concern. The clubs don’t care about the backlash and opinions of the fans.

-A board member of one of the ‘big 6’ to Sky Sports pic.twitter.com/ALzH7ROOAD

The European Super League. The biggest display of greed since I ate 6 packets of pickled onion Monster Munch in one go.

German teams were lauded for rejecting the idea of super league

German football should be regarded as a wonderful thing. Bayern Munich and Borussia Dortmund not signed up. German clubs respect their fans.

PUNDITS AND BROADCASTERS CONDEMN IT

UEFA’s Alexander Ceferin confirms: “The players that will play in the Super League will be banned from playing in the World Cup and Euros. Ceferin. They will not be allowed play for their national teams”. 🚫🇪🇺 #SuperLeague

A furious Gary Neville has hit out at plans to launch a breakaway European Super League, labelling the English clubs involved a "disgrace" and calling for them to face sanctions from the Premier League.

Players like Ander Herrera and Mesut Ozil wanted to preserve the culture of football and not ruin it.

Few believe that, UEFA and FIFA deserve this as they had monopoly on the game. This move would dissolve that status.

UEFA only have themselves to blame, years of false promises about FFP when some of us planned for it, and respected it. They allowed teams to create loopholes and abuse it. Now they want to moan because clubs have had enough of their organisation, they are as culpable as anyone

The audacity of anyone associated with Sky Sports talking about GREED!!! Is it a ‘criminal act’ like the power grab the Premier League made 30 years ago!? Panicking over their monopoly being ended. Like you don’t have vested interests in the current structure being maintained..🙄 https://t.co/WtaHWl7Pq2

Then there was the usual banter.

The game as we know might change in the near future. Time will only tell whether the change’s good or bad for the game and the fans.