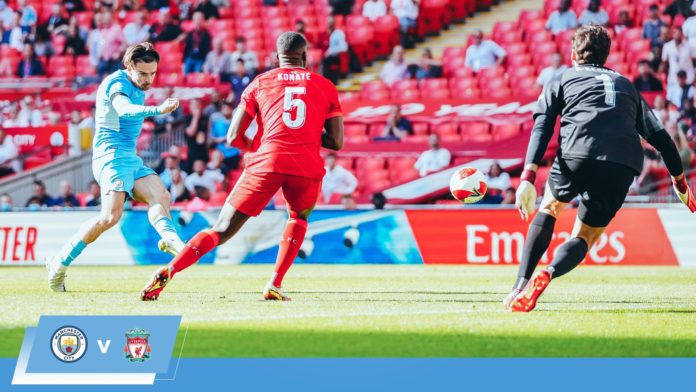 Liverpool booked their spot in the FA Cup final with a thrilling 3-2 win over Manchester City at Wembley on Saturday afternoon. Jurgen Klopp’s side blew away City with three first half goals and saw off a late surge to get the victory.

We'll be back again in May ✊🔴 pic.twitter.com/M7mlpZxaqI

The match started on a low note with both sides still looking exhausted from their European excursions in midweek. Man City’s game though was much more intense and they looked notable off the pace in the opening minutes and found themselves behind quickly.

Ibrahima Konate rose over the sky blues’ defence to nod in Andy Robertson’s corner in the ninth minute to get the ball rolling for Liverpool. The Reds continued to pressure City into mistakes and the pot bubbled over when Zak Steffen took too long to move the ball on and his pass cannoned back off Sadio Mane into the goal to make it 2-0.

Guardiola urged his team to regroup and City did manage to regain some composure and kept the ball better. Neither side was able to produce quality in the final third, leading to a lull in the game.

Liverpool turned the knob back on towards the end of the half and made it 3-0 right at the stroke of half-time. Some great inter-play between Trent Alexander-Arnold and Thiago allowed the Spaniard to chip a pass towards Mane. The Senegalese forward volleyed in an excellent first-time finish past Steffen at the near-post.

45' – Wow. It's beautifully worked between Thiago and Trent. The former then dinks the ball up to Mane who sends a volley with the outside of his right foot past Steffen.

City went into the break in desperate need of inspiration, and it worked immediately. Two minutes after the restart they had pulled one back, thanks to Jack Grealish. Fernandinho slid a pass into the right channel for Gabriel Jesus to run onto. The Brazilian got away from Fabinho and teed up Grealish to apply the finishing touch.

The goal opened up the match with spaces becoming available with increasing frequency. Mane scuffed a shot on the turn after good play from Salah. Van Dijk nearly got on the end of an Alexander-Arnold free kick. Jesus got in behind the Liverpool defence but the angle was against him and Alisson made the save.

Liverpool pinned City in their own half with an excellent coordinated press and they looked the more likely to get the next goal. Nathan Ake made an important last man tackle on Mo Salah to keep City’s ambitions of a comeback alive.

70' – Jesus is played in by Grealish, Alisson makes a superb save one-on-one.

City did have a huge opportunity to make it 3-2 when Bernardo Silva won the ball and Grealish played in Jesus. The Brazilian could not beat his compatriot in Alisson who made another outstanding 1v1 save. They were almost made to pay when Zinchenko tried to head a loose ball back to Steffen but gave it away to Salah. With narrowing space, Salah tried to chip it but the angle was too narrow and it went wide.

Liverpool took the sting out of the game as they controlled the tempo expertly. City were unable to fashion many chances but they did get a second in injury time. Substitute Riyad Mahrez beat Robertson down the left and tried to beat Alisson from a narrow angle. He was unsuccessful but the loose ball fell to Silva who smashed it in with three minutes left to play.

Guardiola’s men rallied and Fernandinho and Mahrez both had dangerous shots deflected over. It was a little too late for City and Liverpool nearly had a fourth with Steffen saving from Firmino.

It finished 3-2 as Manchester City said goodbye to their treble hopes and Liverpool booked their spot in the FA Cup final. Here are our key takeaways –

Ederson’s ice cool photo of remaining calm under immense pressure form Diogo Jota was plastered all over social media after last Sunday’s match. At Wembley though, he was benched and replaced by Zak Steffen. The young American had an evening to forget, gifting Liverpool their second and looking unsure on many other occasions.

At the other end, Alisson was as good as ever. His distribution was exceptional, he collected crosses with ease and his one versus one shot-stopping continues to be miles ahead of anyone we have ever seen. Trophies are decided by margins and today the margins were the goalkeepers.

Despite a dreadful first half and a timid performance overall, there were positives to take for Pep Guardiola form this match. The showings of Nathan Ake and Fernandinho, neither of whom are first-choice, were particularly impressive.

Ake made many important interventions and kept Salah and Diaz in check for most of the afternoon. Fernandinho was City’s most effective press-breaker. The defensive midfielder may be leaving this summer but he showed that he still has some resale value for City.

Liverpool booked their place in the final of the FA Cup next month, where they will face the winner of Chelsea and Crystal Palace. The Reds have already won the League Cup and are in the semifinals of the Champions League where they face Villarreal. The odds of them winning all three cup competitions will be very favourable right now.

They are still fighting in the league, with just one point separating them and Man City but maybe Jurgen Klopp may have to manage his resources and trade the Premier League trophy in for two other ones.