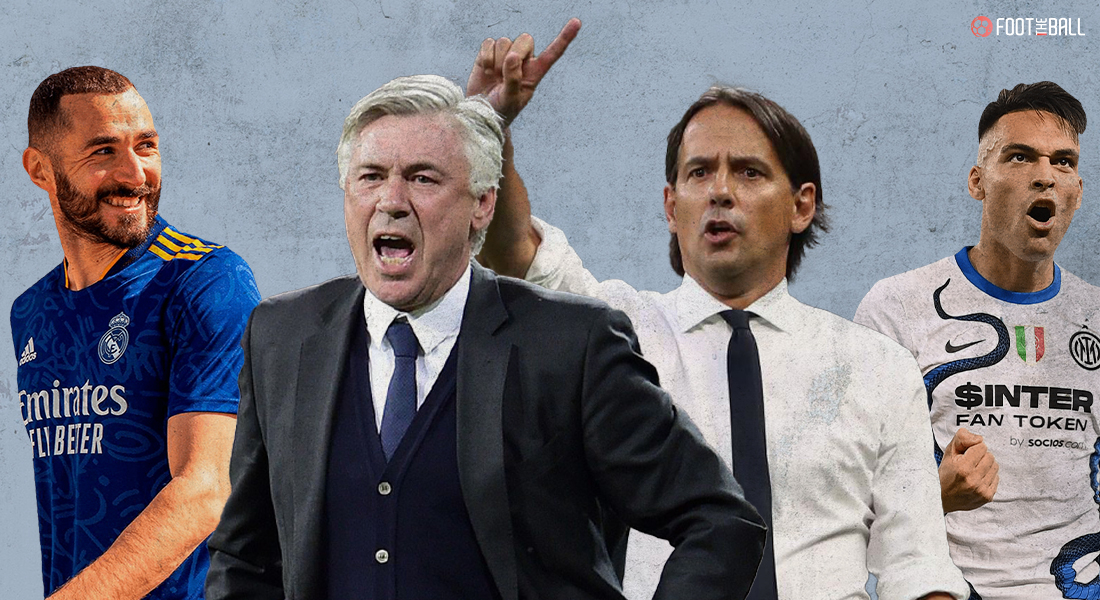 Carlo Ancelotti returns to his homeland with Real Madrid as he visits the San Siro where he used to manage Inter Milan’s fierce rivals and co-tenants of the iconic stadium AC Milan. Los Blancos are coming on the back of a spectacular come-from-behind win against Celta Vigo in La Liga.

On the other hand, Inter Milan drew their match in the Italian Serie A against Sampdoria as they slipped to 4th place in the league despite taking the lead on two occasions at the Luigi Ferraris Stadium.

Both sides play attacking football more often than not, and therefore this match will be a feisty one as they try to outscore each other in an attempt to start their respective Champions League campaigns in the ideal manner.

As the match between the two European giants draws ever closer, FootTheBall brings to you a scrupulous match preview of the same before kick-off in the fashion capital of Italy.

Simone Inzaghi doesn’t have a lot of headaches when it comes to selecting his starting line-up against the Spanish club in Milan on Tuesday night. Only Alessandro Bastoni, Christian Eriksen and Gabriel Brazao will be out of the running for the highly anticipated match.

On the other hand, Carlo Ancelotti will be without the services of David Alaba, Gareth Bale, Toni Kroos, Luka Jovic and Dani Ceballos when his side travel to Milan for the first matchday of the Champions League.

The Argentine will be the fulcrum of attack for the Nerazzurri after the departure of Romelu Lukaku to London to join Chelsea this season. Edin Dzeko will be utilised up front in place of the Belgian, but the primary onus will be on Martinez to cause trouble for Los Blancos’ defence in Italy.

The Argentine has already scored 2 goals in 2 appearances for Inter Milan in Serie A this season and will be hoping to add to his tally on Tuesday night in Lombardy’s capital as Inter begin their quest to start their Champions League campaign on a positive note and eventually finish top of the table in Group D of Europe’s most prestigious club competition.

The Frenchman has been the focal point of attack for the Spaniards in La Liga this season. The former Lyon player bagged a brace against Celta Vigo as Real Madrid came from behind to win their home match on matchday 3 of La Liga.

And it is no secret that he is in stellar form, having scored 5 goals and delivered 3 assists (8 goal involvements) in 4 matches. Therefore, Carlo Ancelotti will be counting on him to take the game by the scruff of its neck in Italy in midweek.

The Frenchman will be supported by some of the finest players in the world in the form of Luka Modric, Eden Hazard and Casemiro as Los Blancos will be aiming for nothing less than a win in Milan.

Real Madrid are flying high in La Liga despite losing key figures like Zinedine Zidane, Sergio Ramos and Raphael Varane as Ancelotti has managed the situation in Madrid like a virtuoso.

But, in stark contrast Inter Milan are apparently still smarting from the departures of Antonio Conte and Romelu Lukaku in the previous transfer window.

Inter can take a leaf out of Real Madrid’s book with regard to coping with the departure of significant personnel, but the quality that Real Madrid possess will be too much to deal with for Inter Milan in Italy during midweek.