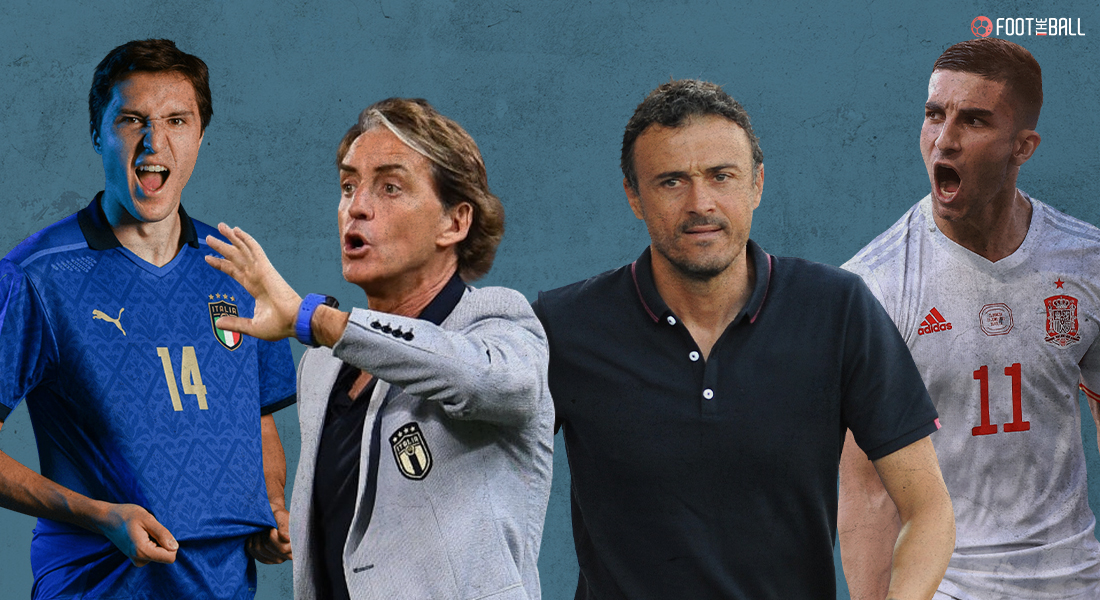 MATCH PREVIEW: ITALY VS SPAIN- THE SPANIARDS LOOKING FOR REVENGE AS THEY MEET AZZURRI IN THE NATIONS LEAGUE SEMIFINAL

The long-awaited Nations League semi-final is here as Spain and Italy clash horns in the semifinals of the Nation League during the international break. Spain lost to Italy in the penultimate stage of Euro 2020 and they would be hoping to change the narrative this time around whereas Italy would be confident to fend off the Spaniards considering the amazing form they have been.

Italy have avoided defeat for 38 games in a row and the number 39 is definitely on the cards. Their backline has been on top form for the past 3 years and their keeper Donnarumma has been on top of his game since last season and his performances over the summer won him the Man of the Tournament in the Euros.

Spain did come close to beating Italy as the game went onto penalties. It was an evenly contested game but Spain missed good scoring chances in the first half which came back to bite them in the aftermath. Both sides play a similar style of football as both managers have chosen to get out of their stereotypical systems and adapt to modern-day football. Form wise both sides are more or less equally matched at the moment which makes this affair tougher than usual.

Italy would have to cope without their prolific striker Ciro Immobile along with Matteo Pessini due to injuries. Spinazzola is still a long way from recovering through his Euros injury and is out of contention for both club and country.

Their star wonder kid Pedri is out due to an injury and Dani Olmo and Thiago Alcantara too are out of contention. Although Morata has been in good form recently, he will be dearly missed due to an injury he suffered in Italy. Marcos Llorente has also been ruled out of the team sheet and Bryan Gil has been added as a replacement.

Federico Chiesa was the man of the match the last 2 times these sides met in the Euro semi-finals and he might pull it off against this week as well. He has been on top of his game for Juventus over the past couple of weeks and will carry the momentum in the Nations League. Since he and Kean have already been playing well alongside each other at Juventus, their good chemistry and synergy will also come into play for the Azzurri.

With Alvaro Morata out, Ferran Torres will be played centrally and will be in charge of doing the damage in front of goal. He has been playing a central role in Pep Guardiola’s system this season and hasn’t disappointed too much. His performance in the Euros was commendable and the youngster has the complete faith of Luis Enrique. It is highly likely that his name will feature in the scoresheet at the end of the game.

Italy and Spain are 2 giants of football and have players more than capable of winning the tournament. It will be a cagy affair and the game can go to penalties this time as well. If it does Donnarumma’s record during spot kicks is too good to beat and Italy will outscore Spain. Italy also has the home advantage that factors in the result of the game. FootTheBall predicts Italy 2-1 Spain and the Azzurri will play the winner of the game between France and Belgium.