James Rodriguez is all set to sit down and have a word with manager Zinedine Zidane once the Colombian international returns to the Spanish capital.

Zidane had promised the 25-year old that he will make time for him and have a word about the flamboyant attackers future at the club. 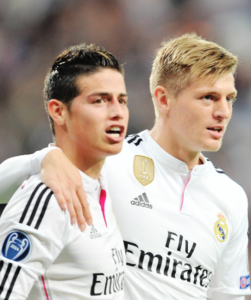 Rodriguez found his game time cut-short after Zidane took over in mid-season, as the Frenchmen preferred to Play Modric, Kroos and Casemiro ahead of the Colombian star.

Zidane has insisted that he is willing to give James a chance but that there are no guarantees of a regular first-team spot.

He added that the midfielder will have to work hard to earn his place and continue delivering good performances in order to be a regular in the first-team.

“James Rodriguez is a Real Madrid player. He will be back on July 26 with Sergio Ramos and Luka Modric. I will speak to him then, like I will with everybody,” he signalled in a press conference.

James has been attracting interest from across Europe, with Premier League clubs like Chelsea and Manchester City said to be interested in the winger’s services.