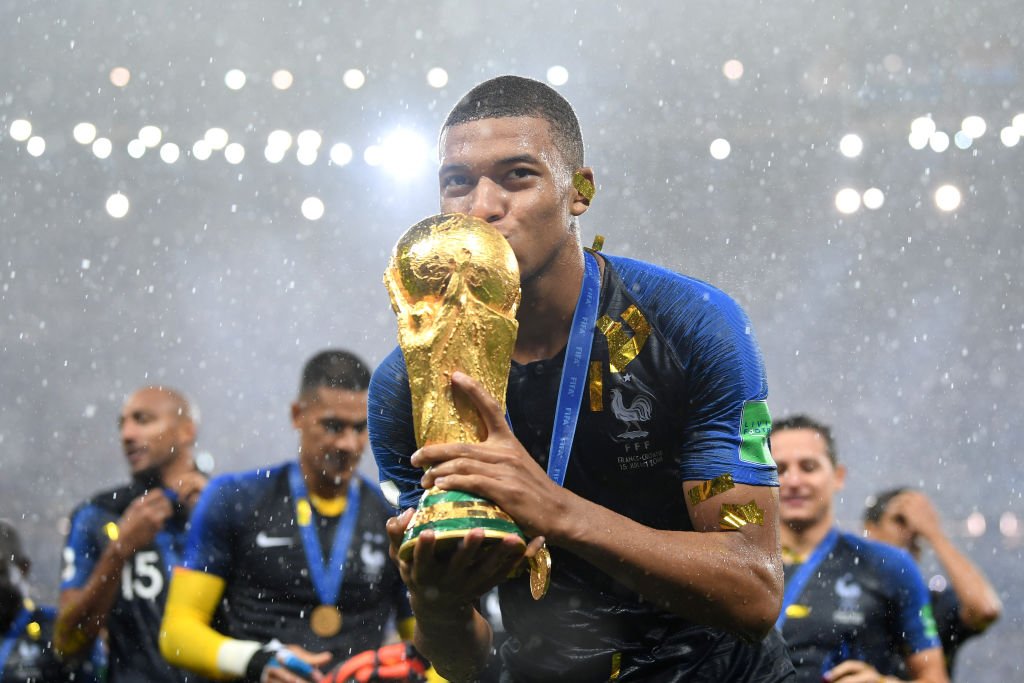 ‘King Will Always Remain King’, Mbappé Thanks Pelé For His World Cup Wish

Over the past month he has been widely acclaimed as a superstar in the making. On Sunday, Kylian Mbappe confirmed that he is already a giant of the game as France beat Croatia 4-2 in the World Cup final at Luzhniki Stadium.

The 19-year-old netted his fourth goal of the tournament and generally created havoc for Croatia’s defence with his clever runs into space and devastating speed.

His 65th-minute strike – a whistling 25-yard effort that flew into the bottom corner – made him the youngest player since Pele to score in a World Cup final. The Brazilian achieved the feat as a 17-year-old in 1958.

Mbappe’s dazzling performances at Russia 2018 also pose a tantalizing question: Is the Paris Saint-Germain forward ready to dethrone Lionel Messi and Cristiano Ronaldo as the best player on the planet?

Ronaldo scored four goals in this tournament but was unable to help his team advance beyond the round of 16. Messi was a shadow of his usual self, scoring just once in an erratic Argentina side that also bowed out in the first round of the knockout phase.

Sunday’s match – an often chaotic end-to-end battle sprinkled with moments of brilliance and some horrendous mistakes – was an entertaining climax to a tournament with no shortage of drama.

Even before the final, this was already a World Cup to remember.

FIFA President Gianni Infantino went as far as to say that it was the best of all-time and it is hard to argue. The tournament has been replete with sparkling individual performances, surprise results, dramatic finishes and brilliant goals.

The tone was set on the opening day when hosts Russia romped to a 5-0 victory over Saudi Arabia, fired by two superb goals from super-sub Denis Cheryshev.

Just 24 hour later, Cristiano Ronaldo netted a hat-trick – including a stunning late free-kick – to earn Portugal a 3-3 draw with Spain in a thriller in Sochi.

There were upsets and early exits aplenty. Defending champions Germany lost to Mexico in their first match and were sent packing before reaching the knockout phase after a 2-1 defeat to South Korea.

Other shocks included Croatia’s 3-0 defeat of Argentina and Russia’s penalty-shootout victory over Spain in the round of 16.

Football fans were also treated to a plethora of gripping finales. Among them was France’s 4-3 round of 16 victory over Argentina; Belgium’s tense 2-1 defeat of Brazil in the quarterfinals; and penalty shootout victories for England against Colombia, Russia against Spain, and Croatia against Denmark and Russia.

As far as individual performances go, it is hard to look beyond Mbappe’s explosive display for France against Argentina in Kazan. The 19-year-old tore the Albiceleste’s defence to shreds as he became the first teenager since Pele in 1958 to score twice in the same World Cup match.

Even the legend himself acknowledged Mbappe’s feat with a simple tweet:

Only the second teenager to have scored a goal in a #WorldCupFinal! Welcome to the club, @KMbappe – it's great to have some company! // O segundo adolescente a marcar um gol em uma final de #CopaDoMundo! Bem-vindo ao clube, Kylian – é ótimo ter a sua companhia! https://t.co/g8b2gLTy7B

The king will always remain king ?

Special mentions also go to Kevin De Bruyne for helping to unravel Brazil in Kazan, Luka Modric for his control and artistry – which included a brilliant long-range goal against Argentina – and Croatia’s Ivan Perisic for sinking England in their semifinal by scoring one goal and setting up another.

Then there have been the goals. Nacho’s volley against Portugal, Toni Kroos’s free-kick routine against Sweden, Cheryshev’s long-range bomb against Croatia, Benjamin Pavard’s strike with the outside of his boot against Argentina and Messi’s deft control and finish against Nigeria are just a few of the contenders for goal of the tournament.

In addition, Russia 2018 has been laced with stories of extraordinary battles against adversity. Several of Croatia’s players have spoken of their families’ difficulties just to survive during the country’s war of independence from 1991 to 1995.

Among those most deeply affected was Modric, whose grandfather was killed by Serbian forces near his home. Modric’s family was forced to live at a refugee hotel in Zadar and his parents scarcely had enough money to pay for his shin pads so that he could play in the local junior competition. Later Modric would face hurdles of another kind; he was rejected by Croatian giants Hajduk Split in his early teens due to his slight frame.

That didn’t stop him from striving to achieve his dream and he was subsequently given a chance by Dinamo Zagreb, where he launched the platform for a career that has taken him to Tottenham Hotspur and his current club Real Madrid.

The 32-year-old was immense in this tournament. Before the final he had run more kilometers than any other player at the World Cup while also being his team’s key creative weapon. He was a deserving winner of the Golden Ball, awarded to the World Cup’s best player.

But this was France’s tournament. Didier Deschamps’ men began in unconvincing fashion, grinding out a 2-1 victory over Australia. But they grew with every match and by the end of it they looked a supremely well-oiled machine that had struck a perfect balance between defensive discipline and unrivalled attacking flair.

They also showed that in Mbappe they have a player worthy of ending Ronaldo and Messi’s decade-long Ballon d’Or monopoly.