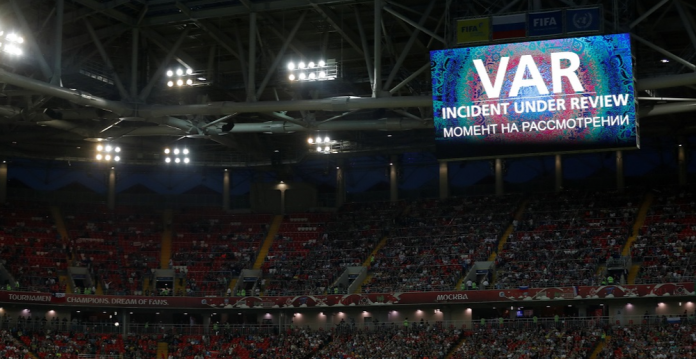 Whether or not you agree with referee Nestor Pitana’s decision to award France a penalty for handball after consulting with the Video Assistant Referee in the 37th minute of the World Cup final, probably depends on whether you are French or Croatian, but there is little doubt that when the Argentinean pointed to the penalty spot it meant that VAR is here to stay.

There is no doubt that Antoine Griezmann’s corner hit Ivan Perisic’s outstretched arm, but if it was intentional, or whether the Croatian was merely surprised by Balise Matudi failing to make contact with the ball is questionable.

Nevertheless Pitana looked at the video and probably made decision which allowed Griezmann to put France 2-1 ahead in the Luzhniki Stadium.

VAR has been a constant factor in the World Cup and it is the third time the French have benefited from its use; being awarded a penalty against Australia in their opening game and with Paul Pogba’s winning strike in the same match adjudged to have crossed the goal-line.

If VAR hadn’t existed, how different could the World Cup have been? Well perhaps France wouldn’t have won their group and would have faced Croatia, not in the final, but in the last 16 instead of Denmark, who would have taken on Argentina and Leo Messi and then perhaps Uruguay in the quarter-finals.

It could have been a very different World Cup, but with the VAR system in place, even though it will take time to get used to (for fans, player and officials), we can be more confident that the right result is reached.

Just don’t say that to Perisic.