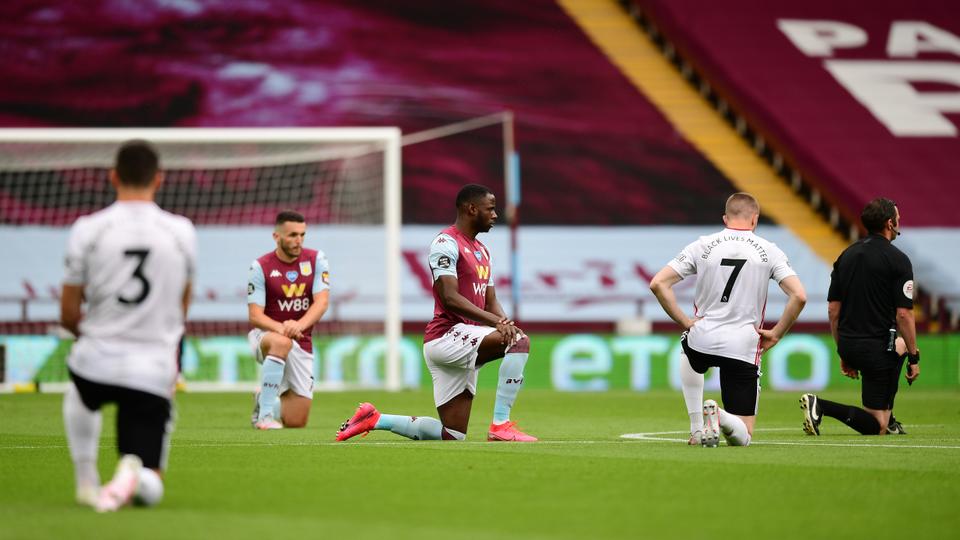 When Manchester City footballer Raheem Sterling challenged English football to do more when it came to tackling systemic racism in the wake of the Black Lives Matter movement, Chelsea manager Frank Lampard questioned his analysis of the problem. For Lampard, his success in coaching was simply down to hard graft. But my research shows that hard work and effort are not the determining factors when it comes to the lack of black managers in the top echelons of the game. In general, English football’s response to Black Lives Matter has been impressive. Professional footballers in England were allowed to demonstrate their support for the movement by taking a knee before matches. And the Premier League allowed its clubs to replace players’ names with “black lives matter” on match day shirts. But Sterling was right to say that that football’s governing bodies must now move beyond symbolic gestures. They need to implement meaningful change to tackle inequalities in the English game – especially in relation to black under-representation in coaching and managing. The fact is there are no black managers in the Premier League and they account for less than 1% of senior coaches – despite making up around 30% of players.

Sterling gave Stephen Gerrard and Frank Lampard as the latest examples in a long list of white ex-England players who started their managerial careers at the premier or championship level. He pointed out the contrast to similarly decorated black former England international, Sol Campbell, who started his managerial career at League Two’s Macclesfield Town – as did another black ex-England international, Paul Ince. Lampard subsequently accused Sterling of making a “very casual” comparison, adding:

I think he got it, from my point of view, slightly wrong … Those opportunities have to be equal for everybody, I think we all agree on that … But, within that, then there are the details of how hard you worked.

But Lampard is wrong. Research has shown that this kind of “double talk” – often by seemingly progressive white people – serves to show their support for the cause in a general way, while simultaneously and politely silencing and discrediting a person’s experience of racial injustice. Lampard’s point that his opportunity to manage was exclusively the result of his own hard work and effort indicates a lack of self-awareness. It reinforces the widely held but inaccurate belief that football is meritocratic. Most importantly, it dismisses the existence of structural and systematic processes of racial inequality within the game and infers that this situation is the result of a lack of effort on the part of black players. This chimes with wider stereotypes of black athletes as naturally talented but lazy. It also overlooks the role of social networks (not the Twitter or Facebook kind) within the process of securing management work.

My research on the post-career experiences of 16 black footballers examined the place of social networking in securing coaching and management work in English football. Social networks are the connections established with family and peers, coaches and managers. Put simply, it’s who you know. Social networks are arguably the most decisive aspect in securing work and trump qualifications and “effort”. Players with good networks get advance warning of new jobs and help securing important introductions. They provide coaching hopefuls with important referees who can vouch for, support and endorse their candidacy. If a player is not part of the right network, it’s unlikely that they will get an interview, let alone a job. My research also showed that while, in general, friendship groups in professional football were multi-racial, intimate friendships – upon which social networks were largely formed – mostly consisted of people who were from the same race or region. One of the participants in the research, ex-player, Simon (not his real name) explained that with very few black people in positions power, the “black” social networks players belong to are frequently unhelpful for securing coaching work.

Lampard’s route into management is a useful illustration. Lampard was born into a footballing family. His dad, Frank Snr, was assistant manager at West Ham, his cousin is Jamie Redknapp (another former England international) while his uncle is the hugely influential ex-manager Harry Redknapp. In fact, Redknapp once explained how he was instrumental in getting his nephew his first job in management:

… I rung Mel Morris (Derby County Chairman), he’s got a house up the road from me … He said Frank had no experience … I said he wants to be a manager, please meet him. The next day he met him in London, they had a meeting at 7 o’clock, half past eight he rung me and said he’d blown him away. I’ve given him the job. And that was it.

Once appointed, Lampard recruited his close friend, ex-Chelsea player Jody Morris, to be his assistant manager – Morris had no prior experience of coaching adults. The Rooney Rule (where a black, Asian or minority ethnic candidate must be included in job interviews) has been offered as a route to tackle black under-representation by the Football Association. But with little jurisdiction over internal recruitment processes within individual clubs, it is unlikely it will ever be implemented in any meaningful way, or even be enforceable. Professional football disagrees with racism in a general sense. But some within its white membership remain reluctant to fully acknowledge the existence of systematic racism and – in particular – how it has influenced their own careers. In response to Sterling, Lampard – clearly a talented manager – could have easily responded that football still does not work for all people in the same way. This would have been an impressive display of self-awareness and anti-racism. Without a genuine acknowledgement of this reality – from all in football – it is hard to see how systemic racial inequalities within the game can be addressed.

Paul Ian Campbell, Lecturer in Sociology (Race, Ethnicity and Leisure), University of Leicester This article is republished from The Conversation under a Creative Commons license. Read the original article.