Troubled Italian club Lazio’s problem don’t seem to be ending anytime soon as they faced a fresh blow, as they managed to sell just 11 season tickets on the first day of sales.

The Rome based club began selling tickets on Monday and according to reports in the Italian capital, could not even manage to sell a dozen tickets. 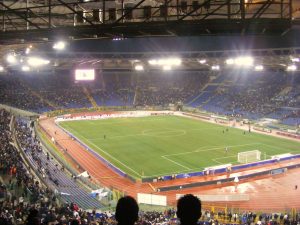 Lazio’s home ground the Stadio Olimpico can host over 70,000 people and yet the club could only manage to sell around 13,000 season tickets last season.

Lazio fans have turned against club president Claudio Lotito after a disappointing 2015-16 season, which saw the club avoid relegation, finishing 16th in Seria A.

The club hadn’t even recovered from that blow when newly appointed manager Marcelo Bielsa resigned from his post just 2 days after he was hired.

Bielsa’s resignation made headlines worldwide, denting the clubs image after which fans took to roads to protest against Lotito.

If the scandals weren’t reason enough, their star player Antonio Candreva is also on the verge of leaving as Chelsea and Inter Milan chase his signature.

Lazio have been shaken by recent scandals and it looks like the fans have had enough of the club president.