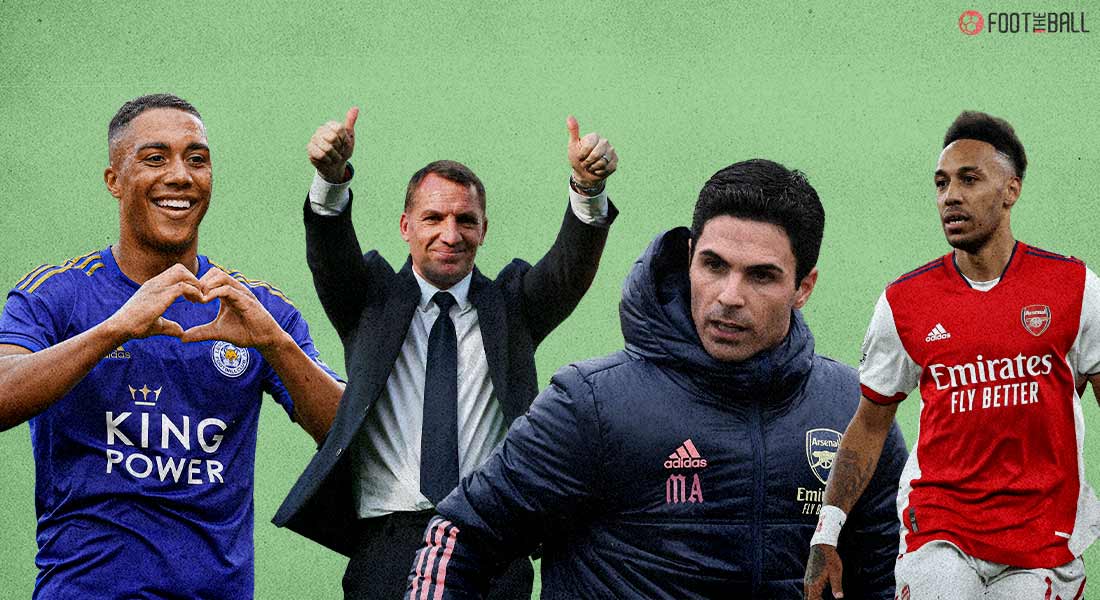 The battle of two resurgent sides in the Premier League with Leicester City playing hosts to Arsenal.

Brendan Rodgers’ side look to have overcome a shaky start to the season with four consecutive wins across all competitions. A dominant 4-2 victory over Manchester United was followed by a hard earned 2-1 success against Brentford which lifted the Foxes to 9th in the table. The addition of Patson Daka to the squad has been a revelation, to further complement the attack featuring Jamie Vardy and Kelechi Iheanacho.

The return of Jonny Evans is also a big boost to their sometimes-suspect defence, while Youri Tielemans is one of the most in-form midfielders in the league right now. Though they have been conceding goals (eight in those four matches), the fact that goal scoring is not a problem will no doubt uplift Rodgers. He knows he cannot allow his backline to be as porous against the Gunners, given their own mastery at scoring in recent times.

Arsenal have finally managed to break into the top half of the table, on the back of stirring results. They are undefeated in the eight games since the 5-0 drubbing to Manchester City, with four wins and two draws in the league. Mikel Arteta and co. have also shown their mettle in recent times, as evidenced by the 95th minute equalizer against Crystal Palace.

Working hard for the weekend 💪

In their last match against Aston Villa, the Gunners raced into a three-goal lead which they never looked like relinquishing. What has greatly aided their good form has been the continued development of the front three- Bukayo Saka, Emile Smith Rowe and Pierre-Emerick Aubameyang have all had positive impacts on the team while the ascension of Aaron Ramsdale in goal has also been a success story.

Granit Xhaka and Kieran remain on the injured list, while Martin Odegaard is likely to only make the substitutes’ bench.

Wilfred Ndidi missing out is a big blow for Leicester in midfield while Marc Albrighton and James Justin are also ruled out. Wesley Fofana remains a long-term absentee.

Though Vardy remains the spearhead of the team, the form of Tielemans behind him has enabled the whole team to attack more consistently. He has three goals and two assists so far, some absolute screamers amongst them. Against Brentford, he created the most chances (4) and the fact that he is getting more into forward positions could spell trouble for Arsenal.

This is because when facing midfielders who drive with the ball quickly and/or pass it ahead accurately, they have been caught on the backfoot. The match against Crystal Palace was the perfect example, as Conor Gallagher’s bustling energy proved too much for Thomas Partey and Albert Lokonga. The midfield duo were caught out for each of Palace’s goals and that is a trick which Tielemans will look to apply in coordination with Maddison.

Youri Tielemans has been directly involved in 5 Premier League goals this season [3⚽️ & 2🅰️]. Jamie Vardy is the only Leicester City player who has been involved in more [8].

Furthermore, the goal scoring touch will also ease the burden on the forwards. Given how masterfully Tielemans hits the ball, whether it be for passes or shots, Arsenal will do well to close him down quickly. The fact that Leicester attack in large numbers will also help the Belgian’s cause as he will have people to spread the ball to, depending on the type of closing down.

For Arsenal, they have their own attacking midfielder who has been amongst the goals. Smith-Rowe has two goals and two assists, but the most important thing has been the level of maturity he has shown already. The linkup play with Aubameyang has been fantastic while his bursting runs from deep has left defenders floundering.

That is bad news for a shaky Leicester defence without Ndidi as well, which has been prone to poor marking and allowing spaces in behind. Aubameyang has been an expert in drawing defenders out of position, which means that runners can go around the opponents. Smith-Rowe’s finishing has also taken a great leap, which comes with an assured nature of his game. The fact that he has not shied down from challenges has been key.

Emile Smith Rowe & Bukayo Saka have both been directly involved in 10 Premier League goals since the start of last season:

Moreover, the fullbacks for the Foxes play quite high which will enable Arsenal to break at fast speed which will be mostly led by Smith-Rowe who can expect to get himself into positions of scoring.

The recent form of the two teams makes calling for the winner a hard task. Both are looking to make headway into the top six soon and this will be an important contest in determining who takes the first step forward. FootTheBall predicts a 2-1 win for the Foxes on home soil.