EXHILARATING TILL THE END 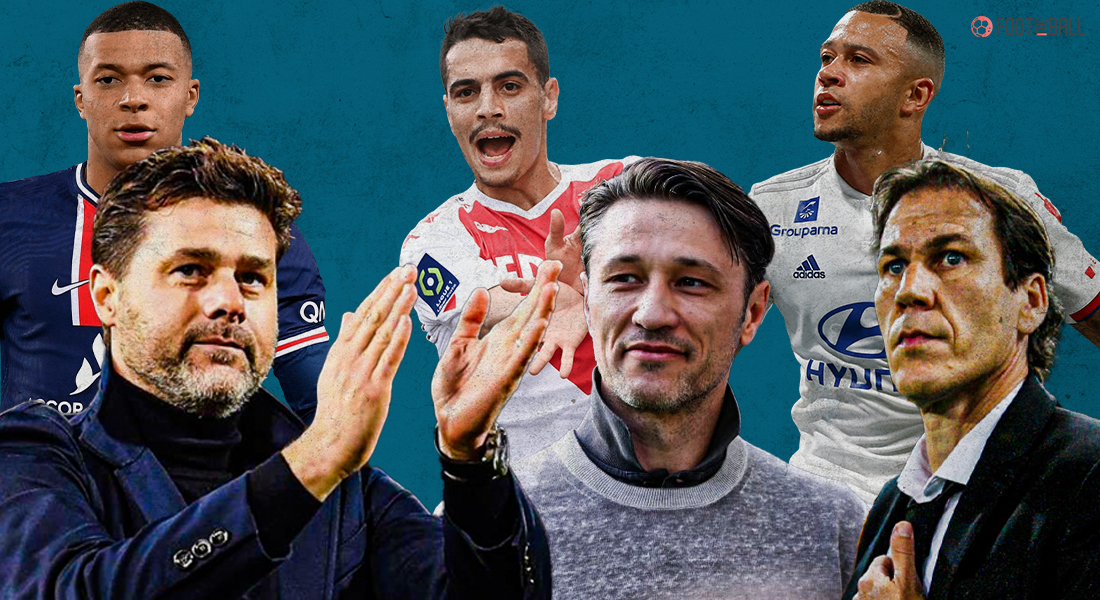 The conclusion of the 2020-21 Ligue 1 season was predicted by exactly nobody. Lille were the very surprising winners, having staved off a late charge by PSG. This title came exactly 10 years after their last one and was a refreshing change from the usual script. Fellow title challengers Monaco and Lyon also had solid seasons, with the top four being separated by just seven points.

What was your favorite moment? pic.twitter.com/ga39syjaWd

Though fans were not allowed, the teams gave a great account of themselves in what was one of the tightest fights for the crown. Suffice to say that were was a lot going on and Ligue 1 did not disappoint in delivering cracking games. FootTheBall presents the report card for the best clubs of France over the past year:

It was really a record-breaking season for Les Douges. Not only did they achieve their highest-ever points total in Ligue 1, they also only lost three games all season. Furthermore, they were undefeated against the top half of the table. Christophe Galtier’s squad really set the pace, as evidenced by their two significant stretches of runs: one loss in 2020 and two in 2021. Though they had the most draws (11) among the top four, it did not matter in the end as they won the title by a single point.

Lille’s star performers were across the pitch. Goalkeeper Mike Maignan kept a record 21 clean sheets enroute to winning the Golden Glove for the second time in his career. The defence was anchored by 37-year-old Jose Fonte and 21-year-old Sven Botman, which led to them conceding only 23 goals (fewest in the league).

🧤 Nothing like a pair of safe hands to help win the 🏆 pic.twitter.com/oMAqh2ji48

Burak Yilmaz proved a lot of his doubters wrong, having joined in free agency at the age of 35. The Turkish international scored 16 goals and had five assists and was ably supported by Canadian star Jonathan David. The 21-year-old racked up 13 goals and two assists himself and both of them scored in their final day win over Angers which confirmed their status as champions for the fourth time in history.

With Galtier set to leave for Nice and Maignan having agreed to sign for AC Milan, Lille are already downgraded in terms of defending their title. It is what their financial model dictates and as more player sales are expected, it is hard to see lightning strike twice for the club.

The loss of the league title will certainly be a failure in the eyes of the capital club. Having dominated France for a number of years, PSG were simply not up to their usual standards this season. With stalwarts Thiago Silva and Edinson Cavani leaving before the start of the season, the club struggled to get going early. They lost two of their opening three games and ended the campaign with a further five losses. That total of eight is the highest in a long time.

Mauricio Pochettino came in at the start of 2021 when the club were second in the standings. Though they would flirt with the top spot for some time, untimely losses coupled with Lille’s dominant run ensured that the former Spurs boss would fail to win the first league title of his managerial career. Neymar’s issues with injuries also did not help as the Brazilian struggled to find form, finishing with just nine goals and five assists from 18 matches.

Elsewhere, Keylor Navas was once again supreme in goal managing 14 clean sheets while the backline led by Marquinhos conceded only 28 goals. However, it was the attack and Kylian Mbappe that really took the fight till the last day. The French superstar’s league-high 27 goals along with seven assists was well complimented by Moise Kean netting 13 goals. PSG once again were the top scorers of the league (86) and won the Coup de France, defeating Monaco 2-0.

The next season promises to be another dominating one for the Parisians who will be out for revenge. With a healthy Neymar and some possible new faces, PSG have the tools necessary to push this aberration of a season aside quickly.

Niko Kovac’s side gave a very good account of themselves and were in the title race until the very end. They suffered the same number of losses as PSG (eight) but had two fewer wins. Only two of those losses came in 2021 as the principality club went undefeated through January and February.

On our way, @ChampionsLeague ✨#UCL pic.twitter.com/FZhOK3coOt

Goalkeeper Benjamin Lecomte finished third in the Golden Glove list with 13 clean sheets. New signings Youssouf Fofana and Aurelian Tchouameni were two of the finds of the season, with their assured performances in the midfield and keen eye for playmaking. 24-year-old Aleksandr Golovin who played only two games in 2020 made a stupendous return to the team following new year’s.

Their linkup play was a joy to behold as Kovac built up a strong team able to challenge in the upper echelons of the table much more consistently. With Champions League football to come and much of the squad most likely to be kept intact, Monaco will once again be a force to reckon with for next season.

A final day loss to Nice saw Rudi Garcia’s side miss out on Champions League football as they finished two points behind Monaco. Despite flirting in and around the top three, they only managed five wins from their final nine games which was simply not good enough. However, there is a lot of cause for optimism around the club. Lyon have been the great entertainers of the Ligue 1, scoring three or more 16 times over the past year.

🎙 @RudiGarcia: “We’re very disappointed tonight. It’s a nightmare scenario. It was my last game tonight and I would have liked to have left the club in the Champions League. The adventure ends here.”#OLOGCN pic.twitter.com/FuhgODG8QP

Antony Lopes had another fine season with 11 clean sheets to his name while their young midfield finally came to the fore this term. Houssem Aouar (seven goals, three assists) and Lucas Paqueta (nine goals, five assists) were the standout stars for Les Gones. Their fluid play was the driving force for Lyon ranking second in terms of big chances created in the top flight.

Memphis Depay had a remarkable season finishing with 20 goals and 12 assists. Alongside Karl Toko Ekambi (14 goals, six assists) and Tino Kadewere (10 goals, three assists), Garcia’s side was the only one in the top four sporting three attackers with double-digit strikes in the league. With Europa League football to come, Lyon fans have a lot to look forward to next season.

With Rudi Garcia leaving the club, another major blow likely to happen is the loss of star man Memphis, who has been feverishly linked with a move to Barcelona. If he does leave, the team will have to find a suitable replacement for him if they are to keep their status of a top contender secure.