BEST OF THE PACK 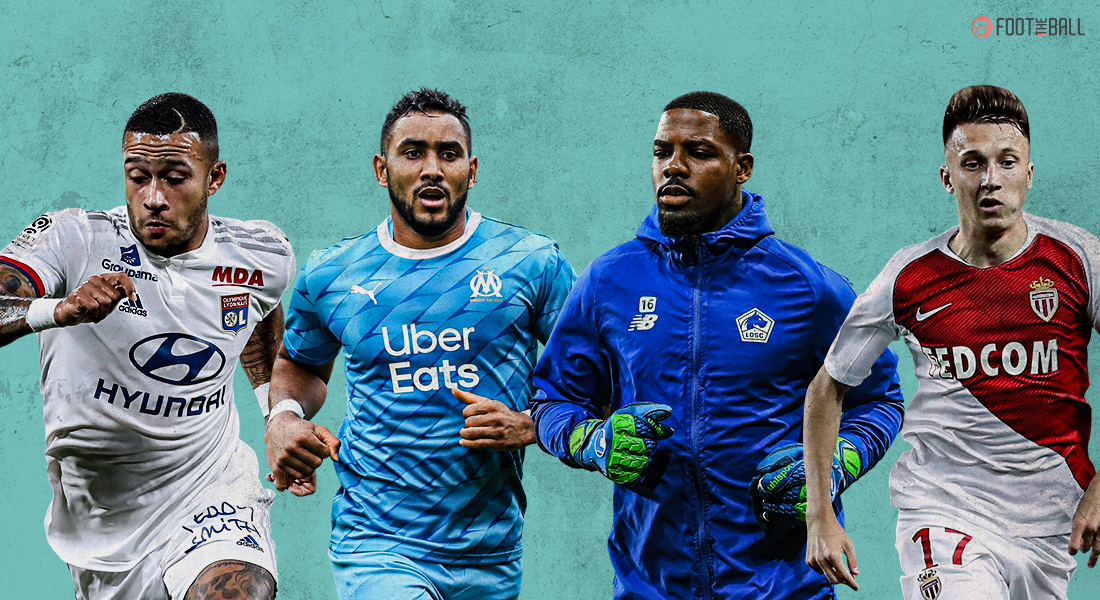 With the Ligue 1 season coming to an end this weekend, the top four is far from certain. Any of the top three- Lille, PSG, Monaco- can end up as champions. That’s how tight this year’s race for the title has been. Also, Lyon and Monaco can exchange European leagues for next term. Even Lille can be forced to enter the Champions League at the qualifying stage.

This 🏆 race just gets better… pic.twitter.com/mrP3YkAbYL

It’s all going to go down Sunday night with the ten kickoffs happening simultaneously. No matter who wins, this has been the tightest race in years in France. Players have given their all in empty stadiums, and there have been several awe-inspiring campaigns personally. Before the finish line comes, FootTheBall looks at the Ligue 1 Team of the Season 2020-21.

The Lille shot-stopper has been at the club since 2015. Having risen through the ranks at PSG’s youth side, the 25-year-old displaced Nigerian captain Vincent Enyeama in 2017 to become the starter. He was the recipient of the Ligue 1 Goalkeeper of the Year in 2019 when Lille finished 2nd in the league, making some fantastic saves with his fast reflexes.

Maignan has been even better in the current season, with 21 clean sheets already to his name. That is eight clear of his nearest challenger and with 84 saves across 37 matches. Even if Lille do not manage to win the league, Maignan has a good enough chance of winning Best Goalkeeper again for his antics this term and enter the final game on the back of three consecutive shutouts.

The Turkish international has been a revelation in Christophe Galtier’s side this term. Having joined in 2018, Celik has gone from strength to strength becoming renowned as an attacking right-back who can actually defend very well. His Lille defence have let in the fewest goals (22) and Celik has firmly established himself in the future plans of the team.

54' Zeki Çelik with a wonder volley from distance puts us 2-0 up 🥳#LOSCOGCN 2-0 pic.twitter.com/6OMusnbWNu

The 24-year-old has also contributed three goals and two assists during the course of the campaign. He has a pass accuracy of 78% and his linkup play with attackers down the right flank has caused opponents’ problems all season long.

There’s a reason why you should not write veterans off. Fonte signed with Lille after six months in China, with many believing his best days were behind him. However, the 37-year-old has proven his doubters wrong all throughout his career in France. Having finished 2nd in his debut season, Lille’s captain now stands one win away from leading his side to the league title.

They boast some of the best young talent in French football and had to replace the outgoing Victor Osimhen in the summer.

They're led by captain Jose Fonte, still at the top of his game at the age of 37.

They need one more win to secure the Ligue 1 title.

This term, Fonte has been imperious in that backline. Holders of the tightest defence, the Portuguese international also has a pass accuracy rate of 90% along with 3 goals. His leadership has been the backbone of the team and even now, he shows no signs of stopping anytime soon.

The longtime PSG fixture has been quietly having another great season. Despite only playing in 24 games, he has helped shore up the Parisians’ defence considerably. They have conceded just 28 goals this season, with Marquinhos being a big reason why.

His ability in the air is among the best in the world, and the 27-year-old does score the odd goal too. His winner against RC Lens at the beginning of the month turned a one-point into three. Ever steady on the ball, he has made 93% of his passes while using his physical strength to keep attackers at bay.

The Ivorian international has been with Lyon for more than six years. Since his sophomore season, Cornet has been an ever-present in the team. Primarily deployed as a left-back who can also play on the wing, he has been a real force in the French club’s pursuit for Champions League football.

10' WHAT A START! 🤩 Maxwel Cornet gets on the end of @Mattia_DeSci's cross to double our lead!#OLFCSM 2-0 pic.twitter.com/RPnTy2MV6y

Cornet has racked up two goals and five assists from 28 starts. His direct running poses problems for opposing fullbacks who have to sit and defend the 24-year-old adeptly. He has an accurate passer rating of 81% with his speed and trickery on the ball supremely beneficial in order to create chances in the final third.

The Argentine winger has found sustained success in Paris since his move in 2015. Though age has somewhat robbed him of his pace, Di Maria still remains an elite level threat. With Neymar out injured various times over the course of the season, the 33-year-old has had to take on additional responsibility for the defending champions.

Di Maria has found the net four times as well as providing nine assists. His 26 games have been on par with last season, and Mauricio Pochettino will hope that he can provide one more brilliant game this weekend in order to get the Ligue 1 title back to PSG.

The diminutive playmaker has been the lynchpin of Marseille’s creativity. Though the club has had an underwhelming season, Payet has shown no signs of fatigue. He has played 32 games and leads the league in assists (10). Furthermore, the former French international also has seven goals to go with it.

One of the most skilful players to play the game, Payet has shown his wizardry many times in this campaign. Most recently, his two goals and an assist in the demolition of Reims ensured maximum points for his team from April’s matches. At 34-years of age, Payet has lost some of his speed. However, his vision and ability to make things happen on the pitch remain untouchable.

The Brazilian’s first season in France has gone very well. Paqueta has appeared 29 times and firmly announced himself as the next big thing to come out of Brazil. Possessing good control and a dynamic sense of movement, he seemingly loves to glide with the ball from midfield.

With nine goals and five assists, he is easily having the best season of his career so far in terms of production. He has a passing accuracy of 81% over the season and last weekend’s match against Nimes was the highlight. Paqueta scored two and assisted one in Lyon’s commanding 5-2 win. Furthermore, he also had created the most chances (4) and won the most duels (14). That Brazilian flair is certainly in the 23-year-old’s veins.

The Russian midfielder’s importance to this team cannot be overstated. Having missed time from late August to early January, Golovin returned with a hunger to succeed. In just 20 appearances, he has racked up five goals and nine assists with 42 chances created.

Technically brilliant, quick with a sharp eye for passing, Golovin has really unlocked the Monaco attack on a whole new level. His goal and assist against Rennes last weekend kept Monaco in the hunt for Europe and even possibly, the title. Time is very much on the 24-year-old’s and he has developed into a big game player who will be eager to make his mark in years to come.

The Dutch striker is having the finest season of his career. Spearheading the Lyon attack, Memphis has been a menace for opposing defences all season long. His ability to get shots away quickly and precisely along with a keen sense of knowing which play to make has kept Lyon firmly in the Champions League conversation.

Having found the net 20 times to go with his 10 assists, he sits third and joint-first on the respective charts. The 27-year-old has also created a staggering 102 chances, a big reason why Lyon are the second-highest scorers in the league. All of this bodes well for the national team where he will be expected to carry the weight of the scoring bulk.

The French sensation has been just that: sensational. Mbappe knows no limits and it has been proven once again during this season. PSG are the top-scoring team in the league, and with his crime partner Neymar being bitten by the injury bug, Mbappe has thrived under the added pressure.

40 – Kylian Mbappé scored his 40th goal for Paris in 2020/21 in all competitions (26 in Ligue 1), his best tally in a single season. Unstoppable. #PSGSDR pic.twitter.com/Uae9kwVsdJ

He looks well on his way to claiming the Golden Boot, having already bagged 26 goals in 26 starts (five more than Wissam Ben Yeddar in second). The 23-year-old also has seven assists this term, as PSG make a late dash in the hope of spoiling Lille’s dream season.

Furthermore, he has also led the club to claim the Coupe de France trophy, with a goal and assist in the final. One thing’s for certain, Mbappe will go onto further heights over the summer’s European Championships.